Home  »  Business Strategies  »  A wake-up call for One Health

A wake-up call for One Health

As an important stakeholder of global health security, it is time for the pharma sector to embrace newer approaches and strategies which are in line with One Health principles to be a worthy warrior in the war against zoonoses

The coronavirus pandemic has made it very apparent that developing proactive and pre-emptive strategies for preventing, detecting, treating and controlling infectious diseases with zoonotic origin is imperative to avert such large-scale crises in future. And, the ‘One Health’ approach will undoubtedly be one of the most key components of any framework which aims to enhance preparedness and response capacities towards zoonotic diseases.

Why is it so vital?
Data reveals that most pandemics, including the latest one caused by the SARS-CoV-2 virus, originated in animals and then spilled over to humans, leading to widespread human-to-human transmission with devastating consequences. In fact, scientists and experts reckon that approximately six out of every 10 known infectious diseases spread from animals, and three of every four new infectious diseases in people originate from animals.

Painting a clearer picture, Pushpa Vijayaraghavan, Director – Sathguru Management Consultants, informs, “Zoonotic diseases have been around from time immemorial. Data available for more than a decade now points to 60 per cent of human infectious diseases being transmitted by animals and 75 per cent of emerging infectious pathogens originating from animals. On the subject of viruses, it is again known that there are over 1.6 million unknown species of viruses in mammalian and avian populations.”
Further, as evidenced by the current scenario where the entire world is being held hostage due to the coronavirus pandemic, occurrence of zoonoses in one country/region will pose a major threat to global health security coupled with huge economic impact. Gaurav Kaushik, MD and CEO, Meteoric Biopharmaceuticals explains, “At present, the world is a global community and public health of any particular region often affects the overall socio-economy of the world.”

So, as the inextricable role of human-animal–ecosystem interface in the evolution and emergence of pathogens become glaringly obvious, the world cannot afford to neglect the ‘One Health’ approach any longer. Dr Prasanna Deshpande, Deputy MD, Indian Immunologicals expounds, “As the human population explodes, interactions with new zoonotic agents from animals will continue to increase. So, prevention of risks that originate at the interface among humans, animals, and the environment is becoming increasingly important.”

Yet, there are few good examples of One Health among the stakeholders of the life sciences industry across the globe, including the pharma industry.

So, how can the pharma sector contribute to this approach?

The role of the pharma industry in strengthening global health security is crucial. Be it vaccines or medicines, the monumental responsibility of ensuring that new drug-based therapies are developed and made accessible in adequate capacities at places where they are needed rests with the pharma sector to a great extent. And this makes the sector one of the most important stakeholders in the pursuit of the One Health agenda. They should team up more with other key public and private partners of health.

To begin with, a closer collaboration between animal and human health sectors of the pharma industry is an exigency to expedite the pace of drug and vaccine development worldwide. Because, as Dr Deshpande informs, “Vaccines have a key role to play within the One Health agenda as they can effectively control disease transmission between humans and animals while having a significant impact on their shared environment.”
Despite noticeable physiological and pathophysiological similarities between humans and animals, interrelated concerns and expertise, human and veterinary medicines largely operate in silos and pharma companies too have often been guilty of not fostering active collaborations.

The sector will have to improve engagements with governments and other public health players to develop, acquire, and accumulate enormous capacities of drug-related countermeasures to protect populations against the threats posed by pandemics. To cite a very recent example, as soon as the news that chloroquine and hydroxychloroquine can be used in the treatment of coronavirus affected patients started doing rounds, wholesalers started hoarding the medicine which led to reports of the drugs’ shortage in different parts of the globe. This, despite lack of absolute evidence of the drugs’ efficacy in the treatment of the coronavirus.

It highlights how the role of the pharma sector in One Health is multi-layered. It will have to work on possible treatments, enable access to the drugs at the right time with ramped up production of the required drugs and efficient supply chains, balance the price of the drugs to ensure affordability and thus drive sustained and coordinated efforts to prevent outbreaks of such scale.

Enforcing One Health will definitely need concerted measures and a renewed commitment from the pharma sector towards protecting and preserving our environment. As one of the three components of the One Health triad, along with people and animals, the environment too needs to get its due or else we will have to face disastrous consequences.

The threat of growing antimicrobial resistance (AMR) is a case in point. Antibiotics, once called a boon are now proving to be our bane, due to their rampant misuse at multiple levels, in human and animal medicine. The ineffective measures of disposing pharma effluents have also contributed to it. This has weakened our defence against zoonoses since several environmental bacteria are acquiring resistance mechanisms, thereby increasing morbidity and mortality in humans and animals.

However, it is heartening to note that quite a few steps have been taken in this direction. In fact, the 2020 Antimicrobial Resistance (AMR) Benchmark, finds signs of improvement in how pharma companies are tackling antimicrobial resistance (AMR). It reports, “More companies are moving to discourage the overselling of their antibiotics and antifungal medicines to doctors and other healthcare professionals. Most companies also have a strategy to prevent antibacterial residue being released in factory wastewaters.”

The report identifies Cipla as one of the drug-makers who have taken commendable efforts to curb the overuse of antibiotics and implement production and source systems that help prevent environmental release of antibiotics. Cipla acquired the rights to plazomycin from Achaogen, taking responsibility for making it available, including in LMICs, divulges the report.

Likewise, to give an example in veterinary pharma, poultry health solutions provider Vetphage Pharmaceuticals has developed solutions based on bacteriophages. These natural microorganisms can attach themselves to a bacterium and subsequently destroy it without causing any harm to the animal or human cells. Dr Ramdas S Kambale, Sr VP- Sales- Asia Pacific, Vetphage Pharmaceutical informs, “Bacteriophages will help us to tackle situations where antibiotics are not as effective. Moreover, bacteriophages kill the bacteria without causing any side effects. Vetphage is striving to deliver the best bacteriophages based products and helping in increasing awareness of such products by conducting technical seminars and reaching out to various industry stakeholders.”

Recently, Human Biologicals Institute, a division of Indian Immunologicals took a step towards reducing the plastic burden on the environment with the launch of an eco-friendly pack for its anti-rabies vaccine – Abhayrab. Its dosages are supplied in millions through governmental organisations, medical practitioners and in retail markets. The new packaging of Abhayrab is manufactured using only paper-based materials to reduce carbon footprint. This also serves as a good example of sustainable practices in pharma.

Pharma companies need to reprioritise their R&D agendas to strike a balance between their business goals and public health needs. Only then will the sector be able to accelerate drug discovery and development to manufacture new medicines, be it prophylactic or curative, in crucial areas such as infectious diseases as well as make better use of existing drugs with adaptive R&D.

It has been seen that pharma R&D budgets are often skewed in favour of drugs for lifestyle diseases which are more prevalent among the high-income populations as they offer more returns on investment than those on investments in medicines for diseases of infectious origin. But, Covid19 has demonstrated that it can no longer be the case. Continuous and sustained R&D efforts in the right manner and the right time is very important to control, not just zoonoses but all infectious diseases.

“Active surveillance and prevention will now be acknowledged as critical after the world has experienced the level of health and economic disruption caused by COVID-19. Surveillance ideally needs to be at the human-animal interface. This calls for cross-stakeholder engagement and joint efforts. In the current government and policy making structure in most countries, human health, animal health, food and environment and governed by different bodies with negligible level of joint efforts,” opines Vijayaraghavan.

The role of both animal and human health pharma companies in this area would be to offer clinical data for retrospective and prospective studies. Ensuring development and supply of vaccines which play a major role in the prevention of diseases will also be a key responsibility. Admitting this point, Dr Deshpande states, “We believe vaccines have a key role to play within the One Health agenda as they can effectively control disease transmission between humans and animals while having a significant impact on their shared environment.” Therefore, in the case of zoonosis, prophylaxis at the animal level with the right vaccines can be a very important weapon in the fight against zoonoses.

Pharma companies’ wholehearted adherence to pharmacovigilance activities will also reinforce their commitment to One Health. Though it is a regulatory practice, surveillance and prevention should also involve continuous monitoring and reporting of adverse drug reactions in both humans and animals. This would guarantee that drugs and vaccines are constantly improved and there is a continuous thrust on developing alternate therapies for better efficacy and safety.

Thus, One Health actually opens up new avenues to draw up and implement innovative and cross-cutting approaches across human health and animal health as well as the food and environment chain to contain and resolve health problems.

Fortunately, there is a growing cognisance of the fact among the stakeholders of the pharma sector that One Health is no longer a choice but a necessity.

“One Health initiative addresses the need for greater collaboration at multiple levels (individuals, public health and research) among professionals who are working on human health and animal health as well,” states Dr Deshpande.

“Three major global outbreaks (SARS, MERS and COVID-19) being linked to a zoonotic virus is an emphatic reminder that we cannot further delay recognising the One Health concept and implementing it in true spirit,” points out Vijayaraghavan.

Kaushik also agrees that One Health initiative is a one-stop-solution for re-emergence of zoonotic diseases and emphasises that stakeholders for both human as well as animal health should join hands to overcome the current loopholes of the system to identify and mitigate the correct root cause of zoonosis diseases.

If the pharma sector steps up to convert this knowledge into sound strategies along with integrated, collaborative co-operation from all stakeholders, then we can definitely tilt the odds in our favour in the war against zoonoses and ensure best health outcomes for people, animals and environment. 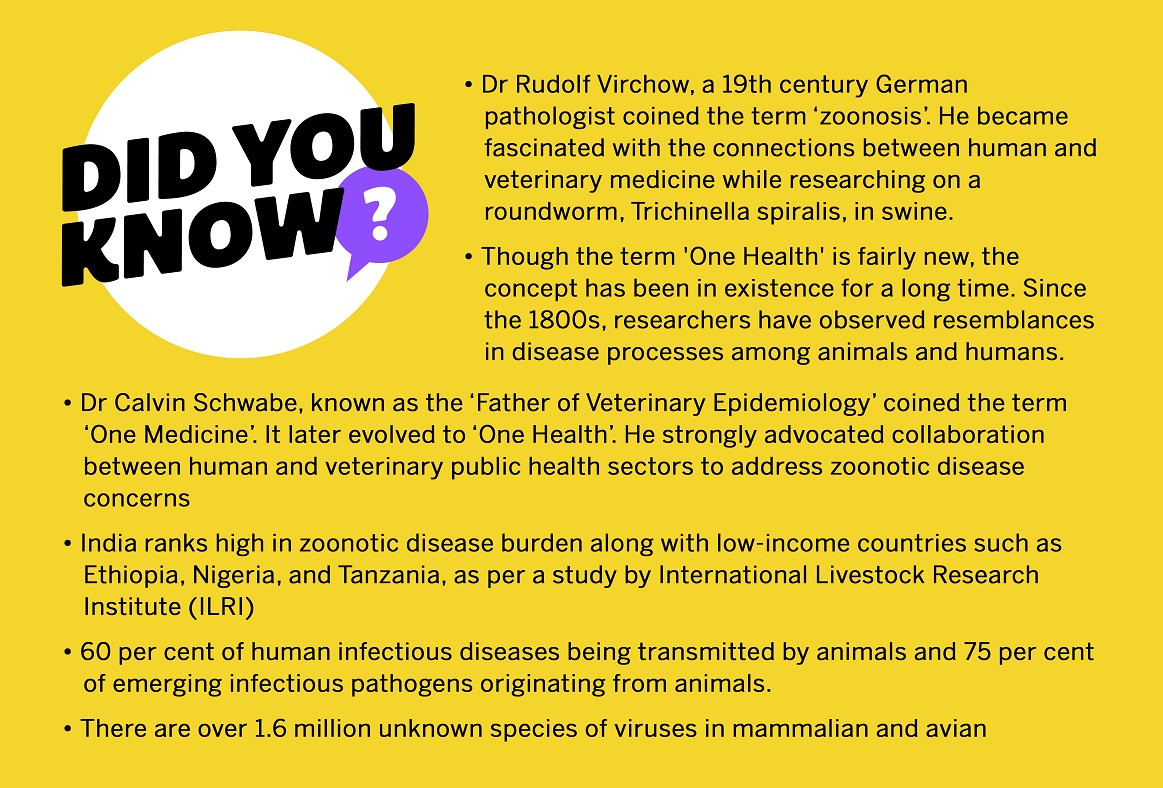