Home  »  Management  »  Towards a healthier Bharat

Towards a healthier Bharat 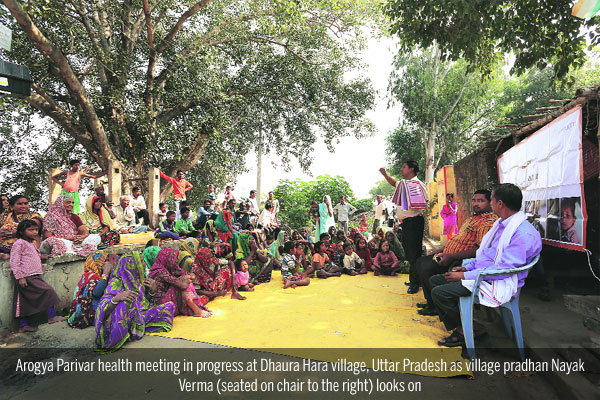 As Novartis’ social business venture, Arogya Parivar completes a decade, the company prepares to plug the gaps and scale up both within the country and beyond, to Africa and South East Asia

Under the shade of a spreading peepul tree, just 26 km from Varanasi, a few miles off NH31, Nayak Verma, the pradhan (headman) of Dhaura Hara village, watches as Prem Chand Maurya, an Arogya Health Shikshak (educator), spins a tale about the importance of cleanliness and hygiene. He is part of Novartis’ social business venture, Arogya Parivar (Healthy Family), which completed a decade this November. As Jawed Zia, Country President, Novartis India puts it, “While we celebrate the success of the first decade of Arogya Parivar, we’re also asking, what is the next decade, AP2.0, going to be about?’’

The Arogya Parivar project which was first piloted in Varanasi in 2007 is today present in 11 states, across approximately 14000 villages, According to company data, in 2016, 7.4 million villagers attended more than 1.35 lakh health education meetings and more than 3.5 lakh people participated in nearly 7000 health camps, of which 1.8 lakh visited a doctor later. Arogya Parivar claims to focus on people in rural, often remote, areas which are excluded from most health outreach programmes of the government. So how successful has this model been?

Though the company did not share revenues earned through Arogya Parivar, a report on their website states that in 2017 YTD September, the programme had generated 287 times the revenues of the first year (2007). In 2016, it was 285 times and 260 times in 2015. It seems to have had similar success in Vietnam and Kenya. (See figure: Key performance indicators (KPIs))

At the ground level, the programme seems to have its share of hits and misses. In the six months since he was recruited, Maurya says he has covered over 100 village communities around Mirzapur. When asked if such meetings are useful, he says he feels a greater sense of satisfaction in this job than his prior job as a substitute assistant teacher in a village school. His target is to conduct three such meetings a day, moving from village to village, averaging 50 health meetings in a month. Village pradhan Verma says, “Awareness about health has increased, the village is cleaner today than before but it will take time.”

While Maurya travels from village to village, the Arogya Parivar team works through the network of angaanwadi and ASHA workers, to reinforce the health messages from within the community. (See box: Leveraging existing links)

Yet, the inhabitants of Daura Hara have a better chance than their parents of meeting a doctor, being treated and cured, than ever before. Rural India, made up of many Dhaura Haras, is today the focus of India Inc. Urban markets have reached their saturation points and corporate game plans today revolve around winning the minds — and wallets — of rural India. If the shampoo sachet was a turning point for FMCG companies, FMHCG companies have been making inroads into rural markets as well.

And Novartis is today not the only pharma company wooing Daura Hara. Sundara Devi, an ASHA worker who is part of Arogya Parivar’s community outreach activities, refers to another pharma company which distributes free medicines to the villagers. Clearly, while the Arogya Parivar philosophy seems to be more long term and aimed at changing health seeking behaviors, the target population might prefer the short term approach which may meets their immediate needs. Its the classic argument about a quick fix Band-Aid approach over longer term
outcomes.

The criticism is echoed at the next stage in the cycle, when patients gather in a spartan room near the village primary school, to be treated by Dr Sonali Maurya, a city doctor who volunteers to visit once a week, in five villages which fall in this cell. She examines, questions, advices patients and then writes out prescriptions. Not necessarily of the Arogya Parivar / Novartis brands. In fact M Lokesh Kumar, Country head – India Novartis Social Business, says that 95 per cent of products prescribed are not from the Arogya Parivar portfolio. And yet, Arogya Parivar broke even in less than three years and has stayed sustainable since then, meeting both its commercial and social targets, as per the company.

But such scepticism doesn’t seem to deter Deborah ‘Debra’ Gildea, who heads the APAC operations of Novartis Social Business. “You have to be patient when you start such initiatives,” she says, going on to add, “You have to listen … it’s very humbling because when you talk to the parents, you realise that they want the same things that you want as a parent for your children – good health, good education – I realise how lucky I was to be born in a country where I got all these advantages.” A GSK veteran of 14 odd years, she supported the development of GSK’s access to medicines strategy in 2010 and moved to Asia to lead the implementation across emerging markets. A 2017 joinee to Novartis, her role is clearly to shape the expansion of Arogya Parivar’s second decade.

Dr Monique Kamat, an MSF veteran who was responsible for relief missions in hotspots like Iraq, Moldova, Swaziland and the like, today heads the medical activities of Arogya Parivar. Sundara Devi and other angáanwadi and ASHA workers are the “key link of community mobilisation”, she says. The most common health threats are identified through this network and further interactions like health meets are tailored to create awareness depending on the prevalent diseases.

For instance, Kamat says that Daura Hara, like most villages in India, has a high incidence of respiratory and water borne disease but with sensitisation on the importance of better sanitation, diarrhoeal deaths in children have reduced. Given that the angaanwadi and ASHA network is exclusively female, it was but logical to focus on the health needs of women, and “bringing her into the health system.” Kamat narrates how this has enabled the social arm of Arogya Parivar to identify previously difficult to track health issues like dysfunctional uterine bleeding, etc.

Lokesh Kumar stresses that the social business model uses a market-based approach for healthcare provision and does not depend on donor or CSR funding: it is self-sustaining and therefore completely scalable as the revenues generated by the sale of Arogya Parivar products, which are selected low-cost medications from Novartis/Sandoz portfolio against diseases prevalent in rural India, fund the programme’s social arm, i.e. the health education activities. Just as Kamat guides her team of health educators to recognise and counsel the patient population and the ASHA network, her counterpart on the sales side, Meghdoot Deherkar, Head Sales & Marketing – Novartis Social Business India, supervises a sales force to ensure medicines are available in the rural areas served by the programme.

Our next stop is Khamariya, which represents the next link in the pharma supply chain, where the commercial arm of Arogya Parivar takes over from the social, with the Arogya Parivar field force liasing with both stockists/distributors, the retail end and the prescribing community.

The first stop for patients in towns like Khamariya are doctors like Dr Govindji Bharnwal, who feels that his BAMS degree is sufficient for him to take care of the most basic needs of his patients. His patients are luckier than those in Daura Hara: they do not need to wait days for a doctor visit as Dr Bharnwal’s clinic flows almost seamlessly into his residence.

… and secondary care at Varanasi

A two hour drive from Khamariya, ITC’s Chaupal Sagar outlet at Chandauli, is the pilot site of the next step in Arogya Parivar’s health chain. Recognising the dearth of doctors willing to dedicate time from their more profitable city practice, in October 2016, Novartis started a telemedicine initiative with Tech Mahindra as the IT partner.

Patients at the clinic get checked by one of two nurses at the clinic, who then hand over patients needing further diagnosis to doctors like Dr Prof Jannavi Tandon, general superintendent at Varanasi’s Mata Anandamayi Hospital.

While the community outreach activities through ASHA workers are good for preventive and primary health, telemedicine sifts out patients who need further care. To take care of patients needing further attention, Novartis is close to working out a partnership for secondary care with Mata Anandamayi Hospital. For a nominal registration fee for Rs 50, the patient gets diagnosed by a doctor and can get upto three medicines free from their pharmacy. Dr Tandon indicates that patients requiring tertiary care will be refered to Varanasi’s Government hospital.
Lokesh Kumar says that the plan is to expand the Arogya Parivar model to seven countries in the Africa and South East Asia regions. The Arogya Parivar portfolio will soon also have its own branding.

While Arogya Parivar’s first decade is proof that a social business venture is a win-win for both patients and the corporate entity, it needs evaluation in terms of health outcomes by independent assessors. Company officials indicated that such an evaluation has been initiated. Hopefully, the second decade will see more efficiencies with these learnings.

(The journalist was in Varanasi on an invitation from Novartis)