Is India’s pharma sector being penalised for its success? 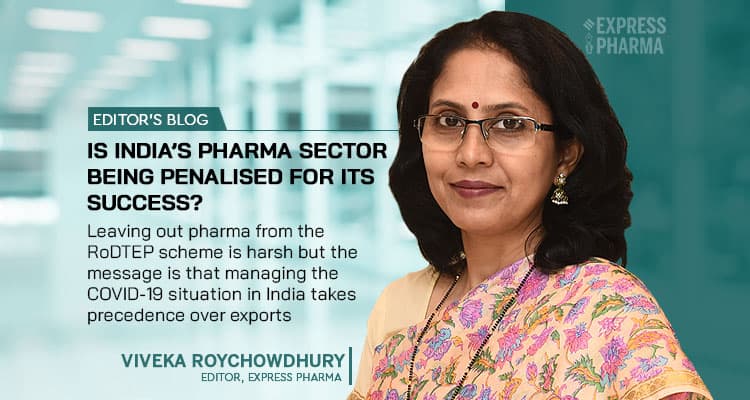 India Pharma Inc was in for a rude shock on August 17 when the Government of India finally announced the rates of rebate under the Remission of Duties and Taxes on Exported Products (RoDTEP) scheme.

The pharma sector, along with chemicals and steel, has been left out of RoDTEP, which would be effective from January 01, 2021. Ostensibly, because India enjoys global competitiveness in these sectors, but it is more likely that the government would like to discourage or at least not do anything to make exports easier in sectors where there is a short supply in the domestic market.

And the pharma sector certainly meets this description. A case in point is COVID vaccines, where output still does not meet demand. Beyond vaccines, the government is currently engaging all stakeholders to create and maintain a pool of essential medicines and medical products to prepare for future waves. Clearly, the message seems to be that managing the COVID-19 situation in India takes precedence over exports.

Industry associations like the Indian Pharmaceutical Alliance (IPA) have registered their protest. Sudarshan Jain, Secretary-General, IPA asserts that the pharma industry deserves three to six per cent benefit both for API and formulations. The IPA has emphasised this point to the relevant committee, says Jain.

The IPA’s contention is that the exclusion of pharma exports from the RoDTEP scheme will adversely impact the pharma sector’s competitiveness, depriving pharma exporters of a level playing field vis-a-vis global manufacturers. Jain points out that competition is increasing from various countries and it is important to provide a level playing field to the sector to maintain a competitive position and leverage the potential of the industry.

The IPA statement alludes to the highly regulated nature of the sector and the need for huge capital investment to set up manufacturing infrastructure. In fact, the IPA argues that ‘for sustaining India’s export competitiveness, RoDTEP benefits should be extended to the pharma sector given the importance of the sector in access of affordable medicine to patients in India and around the world.’

It follows that pharma exports set off the costs of providing affordable medicines in India. Seen in that light, it would make sense to extend the RoDTEP scheme to the sector, but the government is evidently worried that medicines and vaccines meant for India will be diverted to exports.

The country’s COVID vaccine coverage is still low. According to the Our World in Data site, as of August 24, 2021, just 9.42 per cent of India’s population has had two doses, while 23.35 per cent have had a single dose. With just 32.77 per cent of our population vaccinated with one or two doses, talk of a third booster dose seems counterintuitive.

So will the government consider the industry’s argument, given that exports have been a high thrust area? As IPA’s Jain points out, the RoDTEP policy has a significant impact on Indian pharma’s export performance. The Government has planned an increase in exports to $400 billion by the end of the financial year from the current level of $300 billion, which would make it an increase from 10 per cent to 15 per cent of GDP by the end of the decade.

Pharma will play an important role in the growth journey, explains Jain, with pharma exports expected to grow from $24 billion to $29 billion this year and to $75 billion by the end of the decade. But to achieve this, “All-round policy support will be important to harness the potential of the industry in the highly competitive and changing global landscape,” says the IPA chief.

India Pharma/Vaccine Inc, like its global peers, is looking at the COVID pandemic as both an opportunity to meet an unmet medical need as well as claim a slice of the COVID pie and gain market share. This is to be expected, after all, these companies have to also answer to their shareholders.

And the government too would like to prove India’s prowess in vaccine development with exports to countries that do not have this infrastructure yet. In fact, NK Arora, Chairman of the National Technical Advisory Group on Immunization in India has clarified that exports of COVID-19 vaccines from India will resume in 2022, once all adult Indians are fully vaccinated.

This is going to be a multi-year battle against the coronavirus, which requires both industry and government to align together. Thus the pharma sector might have to forgo the benefits of the RoDTEP scheme, keeping in mind the larger picture.

If deferment of vaccine exports is one lesson learnt, another one for policymakers and vaccine makers is to pursue simultaneously pursue EUAs for India’s COVID vaccines from global players. Also, just as the US FDA has awarded full authorisation to Pfizer’s COVID vaccine, Indian regulators should review the data on Covisheild and Covaxin and consider full approvals for both vaccines after due process. This would nudge more people to take these vaccines and nip vaccine hesitancy in the bud.

Zydus Cadila’s DNA three-dose needle-free COVID vaccine, ZyCoV-D, recently became the sixth vaccine to get emergency authorisation in India. But, even though touted as the first COVID jab for children above 12 years old, there are reports that registrations in this age group are below expectations in some cities. This will delay the process of getting data on the vaccine, especially in this age group.

Vaccine hesitancy is a problem not just in India. For example, even though around 52 per cent of the US is fully vaccinated, health authorities have reported a slowdown due to vaccine hesitancy, as per an AFP report.

What could change the tide and convince more parents to sign up their children for the Zydus Cadila vaccine, and others in the pipeline, is more open communication and awareness-building measures. Can we have the age-eligible children of politicians take this vaccine in public? Or can Bollywood and tinsel town stars step forward to set an example, for a good cause?

Pharma Leadership Forum 2021: Building a Vision for the Future – Accelerating Drug Discovery for a Better Tomorrow