The primary objective of the centre is to harness the potential of traditional medicine from across the world through modern science and technology, and improve the overall health of the communities world over 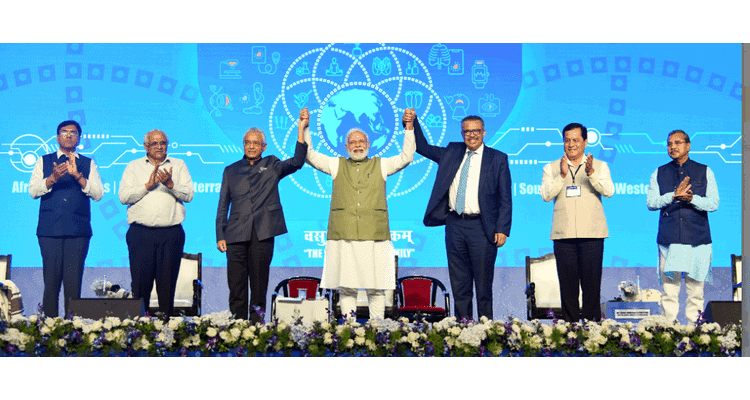 The foundation stone of the world’s first WHO Global Centre for Traditional Medicine (GCTM) was laid in Jamnagar, Gujarat, by Prime Minister Narendra Modi on 19th April, 2022 in the presence of Dr Tedros Ghebreyesus, Director-General, World Health Organization (WHO) and Pravind Kumar Jugnauth, Prime Minister, Mauritius. The ceremony was attended by Dr Mansukh Mandaviya, Minister of Health and Family Welfare and Chemicals and Fertilizers; Sarbananda Sonowal, Union Minister of Ayurveda, Naturopathy, Unani, Siddha and Homeopathy (AYUSH); Bhupendra Patel, Chief Minister, Gujarat; Dr Munjpara Mahendrabhai Kalubhai, Minister of State, Ministry of AYUSH, and other senior officials of the Ministry of AYUSH and the government of Gujarat.

The primary objective of the WHO GCTM is to harness the potential of traditional medicine from across the world through modern science and technology and improve the overall health of the communities world over. The centre will highlight the potential of traditional medicine and utilise technological advancements to promote its safe and effective use.

The WHO GCTM in India at Jamnagar, Gujarat, will have its interim office at the Institute of Training and Research in Ayurveda (ITRA) in Gujarat. This centre will be supported by an investment of about $250 million from the government of India.

Speaking during the ceremony, PM Modi said, “The WHO Global Centre for Traditional Medicine is recognition of India’s contribution and potential in this field. India’s traditional medicine system is not limited only to treatment. It is a holistic science of life. India takes this partnership as a huge responsibility for serving the entire humanity.”

He noted that WHO GCTM is a truly global project. “Through this centre, India will be able to take its knowledge of traditional medicine to the world and similarly world will come to India,” he added.

Jugnauth also said, “Mauritius and India share the same traditional medicine values. In Mauritius, the practice of AYUSH’s medicinal systems is popular and fully recognised. We have recognised that traditional medicine complements scientific medicine and represents healthy living and promotion of good health. With the Global AYUSH Investment & Innovation Summit, I wish for the interactive themes on yoga, ayurveda and traditional medicine to broaden the scope of AYUSH medicine in the region at large.”

Sonowal emphasised on the history of traditional medicine in his address.

“India has been proven pioneers in the field of traditional medicine since time immemorial. The knowledge sharing and cooperation has been documented in history and in continuation of the same, focussed efforts have been relentlessly undertaken by the ministry of AYUSH. The establishing of the global centre is an effort to bring synergy, and cooperation in this domain would benefit all the member states,” he said.

Apart from it, the first Global AYUSH Investment & Innovation Summit 2022 (GAIIS) was also inaugurated in Gujarat, Gandhinagar by PM Modi, which was held from 20th to 22nd April, 2022. The summit was organised in line with the Sustainable Development Goal Number 3 of promoting “Good Health and Well-being.”

The summit saw participation from industry leaders, academicians and scholars, who highlighted the ways to promote traditional medicines and systems. In addition, as part of the summit, an AYUSH Startup Challenge was also organised, along with an exhibition, wherein startups, incubators and entrepreneurs working in this field displayed their work. The AYUSH sector witnessed Letters of Intent (LoIs) of over Rs 9,000 crores in three days. The investments come across major categories like FMCG, Medical Value Travel (MVT) and services, pharmaceuticals, technology and diagnostics, and farmers and agriculture. During the summit, more than 70 Memoranda of Understanding (MoUs) were signed between countries, research institutes, the farmers groups and industry.

The three days were wrapped up with a total of five plenary sessions, eight roundtables, six workshops and two symposiums, all packed into a short time span of three days. The summit witnessed the presence of 90 eminent speakers and 100 exhibitors.

Traditional medicine is a key pillar of healthcare delivery systems and plays a crucial role in maintaining good health and well-being not only in India, but across the world. In recent year, traditional medicine therapies have also seen a major transformation as the usage of Artificial Intelligence (AI) and various technological innovations have made it more accessible to masses.

Hopefully, the collaboration between the government of India and WHO will help in developing an enabling framework to attract investments, providing strategic support to policies, and will give boost to the AYUSH sector globally.