IMPCL pays a dividend of over Rs 1.5 crores to Ministry of AYUSH

The IMPCL has paid 15 per cent dividend on Profit After Tax (PAT) which comes to Rs 1.66 crores 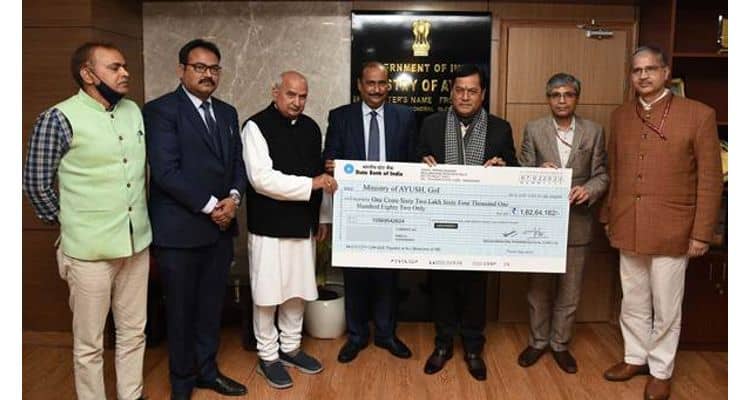 Indian Medicines Pharmaceutical Corporation (IMPCL), a central public sector enterprise (CPSE), working under the Ministry of AYUSH, has announced to pay a dividend of Rs 1.65 crores to its stakeholders – Ministry of AYUSH and Government of Uttarakhand. The dividend, in the form of a cheque, was handed over to Sarbananda Sonowal, AYUSH Minister, in a ceremony held at AYUSH Bhawan yesterday.

Acknowledging the fact that IMPCL is a mini ratna company, the minister said that AYUSH system of medicines is being recognised worldwide and the market size is increasing as well. The IMPCL has paid 15 per cent dividend on Profit After Tax (PAT) which comes to Rs 1.66 crores. The dividend proportion to Rs 1.63 crores to Government of India and Rs 3 lakhs to M/s KMVN for the year 2020-21.

​IMPCL is a Public Sector Undertaking (PSU) under the administrative control of the ministry of AYUSH. It is a Joint Venture Company (JVC) with the government of India having a share of 98.11 per cent and the government of Uttarakhand having a share of 1.89 per cent. Certification line company is currently manufacturing 656 classical ayurvedic, 332 unani and 71 proprietary ayurvedic medicines for the various diseases spectrum. Recently, IMPCL has been conferred WHO­GMP/CoPP certification by DCG(I) for 18 ayurvedic products which gave the opportunity to explore export business.

According to Dr Kumar, though it was a challenging financial year for the operational activities due to the COVID-19 pandemic, it has also given an opportunity due to an increased demand of ayurvedic medicines in general and immune-boosting medicines, in particular, which has contributed to record all-time high turnover of Rs 164.02 crores and Profit Before Tax (PBT) of Rs 15.69 crores for IMPCL during 20-21.