As attempts to ring-fence markets and restrict access continue, will India and South Africa toe the WTO line? 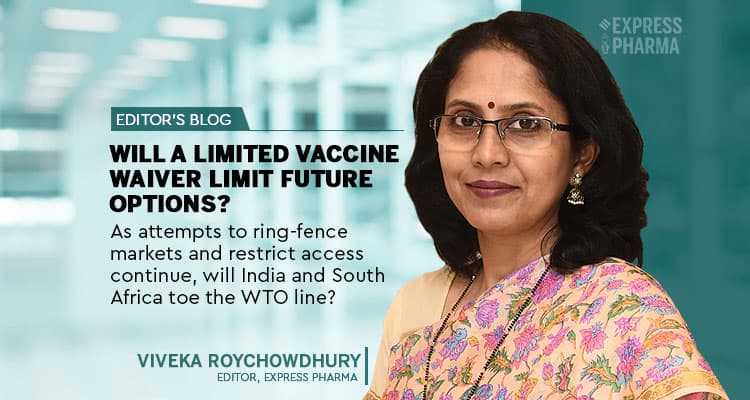 After formulating and garnering the support of over 100 countries for a TradeRelated Intellectual Property Rights (TRIPS) waiver for COVID essentials, why did the governments of India and South Africa be part of a proposal to water it down?

A leaked draft of a World Trade Organisation (WTO) document, which reportedly emerged after discussions among India, South Africa, the US and the European Union (EU), is currently being discussed by governments of other WTO member states.

While it could be considered a much-needed break in the stalemate since South Africa and India first launched this campaign in October 2020, health NGOs feel this limited vaccine waiver could instead turn out to be the first step down a wrong lane, as it could set a bad precedent for the future.

Other experts feel that this negotiation is a start, as it will ease supply of COVID-19 vaccines. Would it be pragmatic to settle for just vaccines now, hoping either that the COVID pandemic becomes more manageable or that the waiver is expanded to medicines and diagnostics through further negotiation?

These concerns do seem valid. Firstly, the proposed compromise covers just vaccines. Though the document hints at including treatments and diagnostics at a later date, why not now?

A petition from the People’s Vaccine Alliance points out that IP barriers are probably higher for treatment with only 427 of the 5,293 COVID-19 patent filings being for vaccines. Thus, 92 per cent patent filings were not for vaccines and removing IP barriers for treatments, tests and other medical technologies (such as genomic surveillance) will have an even faster impact (via generics) compared to vaccines. Thus, while vaccines are important for prevention of COVID-19, the importance of diagnostics and therapeutics cannot be ignored.

The Alliance, a global coalition of over 90 organisations and networks, has asked the Government of India’s Ministry of Commerce and Industry to push the WTO towards waiving all forms of intellectual property (IP) on the COVID-19 vaccine ahead of WTO’s General Council meeting.

Secondly, the proposed deal is geographically limited. India is eligible for this proposed vaccine waiver as its share of vaccine exports was 2.4 per cent as of January 2022, according to the WTO-IMF’s COVID-19 vaccine tracker, which is well below the criteria of not exporting more than 10 per cent of COVID-19 vaccines in 2021.

However, doesn’t this criterion defeat the entire purpose of allowing developing countries with large vaccine manufacturing capacities to make affordable vaccines and export as much as possible to all countries, including those with low or poor vaccine-making capabilities, which are susceptible to high COVID-19 infections and deaths?

For instance, as per an MSF analysis, this criterion effectively excludes Brazil and China from being able to use the waiver. The Alliance’s petition highlights that ‘limiting the scope of the vaccine waiver even in the third year of the pandemic is ethically, politically and medically ill-conceived.’

Thirdly, the proposed limited vaccine waiver covers only patents and leaves out other Intellectual Property (IP) barriers, such as trade secrets, which are critical for manufacturing of medical products. A case in point being that even while Moderna has offered to waive its patent on its mRNA vaccine way back in October 2020, it has not resulted in a slew of affordable safe vaccines equivalent to Moderna’s original product.

Are such efforts to improve access doomed to be imperfect? Almost coinciding with the leaked draft of the proposed limited vaccine waiver, the Medicines Patent Pool (MPP) signed agreements with 35 manufacturers (including 19 from India) in 12 countries to produce and supply nirmatrelvir/ritonavir. This oral drug is considered the most promising one so far for treating high risk cases which could progress to severe/critical COVID-19. But as Felipe de Carvalho, MSF Access Campaign Coordinator in Brazil points out, the deal only covers 53 per cent of the world’s population and excludes millions of people in middle-income countries.

Experts also point out that the proposed consensus document adds restrictions beyond TRIPS and could end up reducing previously available flexibilities, thus restricting, rather than increasing access. For instance, applicants need to list all patents covered by the authorisation. They also have to notify the WTO TRIPS Council when such rights included in the waiver are exercised by an eligible Member. In addition, the antidiversion measure tasks eligible members to prevent re-exportation of COVID-19 vaccines.

These legal requirements make the process more cumbersome and seem designed to deter rather than encourage applicants. There is also some ambiguity on the duration of the waiver (three or five years) but this grey area could merely reflect the fact that the proposal is not final, and is still at discussion stage.

As attempts to ring-fence markets and restrict access continue, will India and South Africa succumb to the pressure to toe the WTO line? Or will they continue to stick their necks out to make affordable COVID-19 vaccines, medicines and diagnostics freely accessible in both the Global North and South?