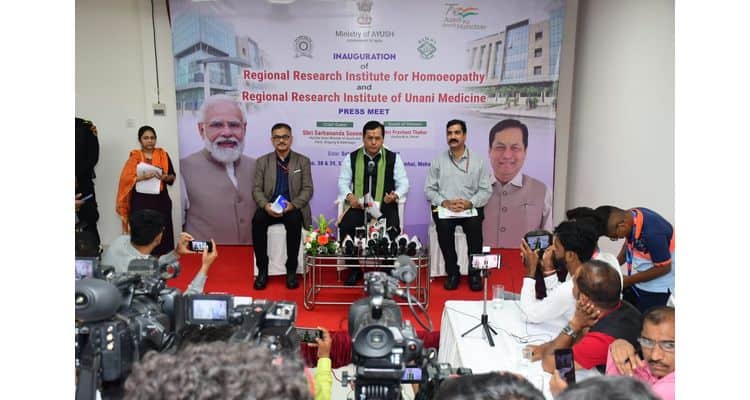 The Union Minister of Ports, Shipping and Waterways and AYUSH, Sarbananda Sonowal inaugurated an AYUSH Building Complex at Kharghar in Navi Mumbai recently. This new infrastructure will house the Regional Research Institute of Homoeopathy (RRIH), under Central Council for Research in Homoeopathy (CCRH) and Regional Research Institute of Unani Medicine (RRIUM) under Central Council for Research in Unani Medicine (CCRUM). Built over an area of 1999.82 square meteres with a constructed area of 5,860 square metres, this three-storied building complex was constructed by City and Industrial Development Corporation of Maharashtra (CIDCO).

The institutes will provide facilities like patient consultation, medicines, laboratory facility for routine haematological and biochemistry for the paediatric, geriatric and general population, and are headed by separate In-Charges of Homoeopathy and Unani, respectively. It is proposed that the RRIH and RRIUM will be soon being developed as Institute of Homoeopathy for Allergic Disorders and as a Centre of Excellence for IlajBit-Tadbeer i.e. Regimenal therapy, respectively.

Speaking on the occasion, Sonowal said, “The Indian traditional medicinal practices have been proving their effect on enrichment of human lives over many centuries. The idea to incorporate the benefits of this branch of medicine in addition with the modern medicine was brought forward by our honourable Prime Minister Narendra Modi ji. We intend to make these two institutions – Regional Research Institute of Homoeopathy (RRIH) and Regional Research Institute of Unani Medicine (RRIUM) into Centres of Excellence for Allergic Disorder and Regimental Therapy, respectively. Plans are already afoot, at the behest of the Ministry of AYUSH, towards this end.”

Adding further to the commitment of the government towards promotion of traditional Indian medicinal practice, Sarbananda Sonowal further added, “As per PM Modi ji’s vision of strengthening traditional Indian system of medicine, the Ministry of AYUSH has been taking steps to encourage, energise and expedite promotion and application of our own traditional medicinal practices for better patient care. Today, with the inauguration of this infrastructure, we move a step closer to this objective. With the inauguration of this complex, the AYUSH medicinal practices has got a shot in the arm in Maharashtra. I hope that the people of Mumbai and the whole of Maharashtra can avail the benefit from the work done at these two institutions from now on.”

High expectations from the draft Bill