Pycnogenol® for cognitive function at every stage of life

Franziska Weichmann, Manager of Scientific Communications and Product Development, HORPHAG informs that Pycnogenol®has shown a broad spectrum of cognitive related benefits in all age groups and the underlying mechanism of action is based on its ability to regulate the endothelial function via adjusting nitric oxide (NO) production 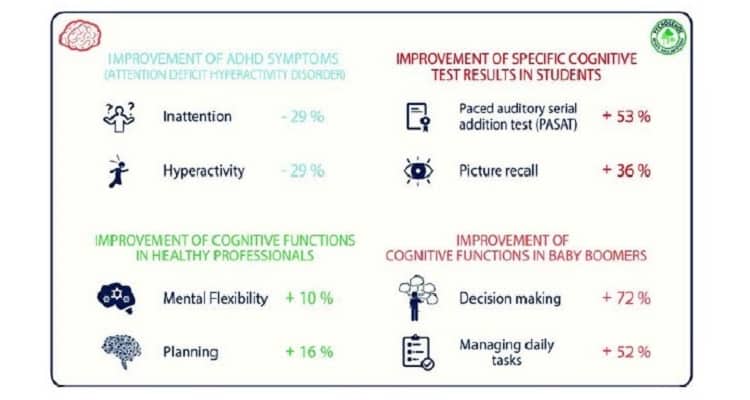 A normal cognitive function is a prerequisite for a healthy life. The brain function may be altered in case of either hyperactivity or hypo-activity of the brain. Hyperactivity is frequently observed in children, commonly referred to as Attention Deficit Hyperactivity Disorder (ADHD), whereas the decline of brain activity is related to the aging process.

The underlying mechanism of action of Pycnogenol® is based on its ability to regulate endothelial function via adjusting nitric oxide (NO) production (10, 11). It has been shown that NO has beneficial effects on brain function (12). NO is capable of relaxing constricted blood vessels, normalising blood pressure and helping to protect tissues from damage, caused by low blood supply (13). By regulating vascular smooth muscle relaxation, NO leads to increased blood flow, which ensures sufficient supply of oxygen to neuronal cells (14). In addition, NO has been found to regulate neuronal functions and helps to modulate key neurotransmitters, thus contributing to processing signals in the brain (15, 16). Interestingly, the active metabolites of Pycnogenol® build up inside the endothelial blood cells and have been proven to pass the blood-brain barrier (11).

Pycnogenol® regulates the NO production in two ways. The endothelial NO synthase (eNOS), generating normal concentrations of NO from L-arginine in the cell, is stimulated by Pycnogenol®. At the same time, Pycnogenol® prevents a toxic overproduction of NO by downregulating the inducible NO synthase (iNOS) – a well-established source of nitric oxide (NO*) during i