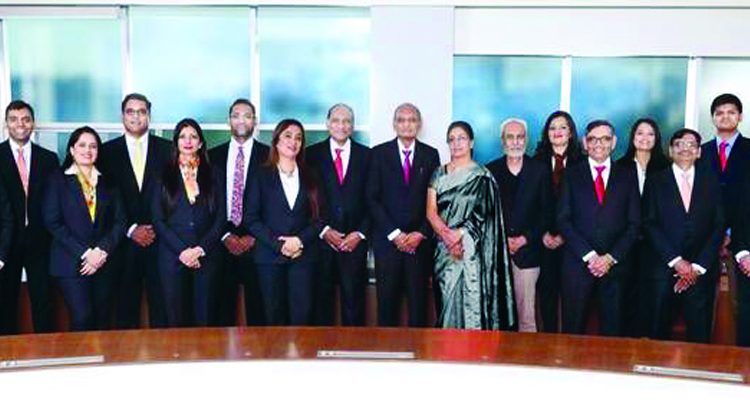 The ‘Made in India’ success story of HiMedia Labs, one of the top three global media manufacturers and its contributions to scientific progress, under the aegis of its able leader, Dr Gangaram Warke By Lakshmipriya Nair

“Bombs and pistols do not make a revolution. The sword of revolution is sharpened on the whetting-stone of ideas.”
– Bhagat Singh

Since Independence, ideas conceived and executed by countless Indians, sung and unsung
heroes of this country, have proven these words true. Their invaluable contributions have led to India’s emergence as one of the fastest growing economies in the world today. And, in our Independence Day Special issue, Express Pharma brings you one such story. The journey traced
by Dr Gangaram Warke, an Indian microbiologist turned entrepreneur, to ensure that his country’s scientific progress is not hampered.

Today, HiMedia Laboratories, the company that he began over four decades ago, is one of the leading biosciences companies in the world with a presence in more than 140 countries.
Thus, it is a riveting tale of struggle, strife, toil and subsequent triumph.

Nurturing a vision
HiMedia Laboratories was born in 1976 with a vision to alleviate the huge struggle faced by Indian researchers to obtain cost-effective microbiology media and allied products on time.
The years spent on his doctoral research as well as working in the R&D and quality control departments of pharma companies had led Dr Warke to realise that India was largely dependent on the US and Europe for these products and had to procure them at exorbitant prices. This, in turn, was a drain on the funds for research and an impediment to progress.

Dr Warke’s solution to this conundrum was to establish his own company and manufacture culture media in India itself to make it self-reliant. But, it was an audacious dream at a time when the market was dominated by a 400-year-old German corporation, a 120-year-old US giant and a 90-year-old British conglomerate.

Yet, buoyed by the unstinting support of his brother Vishnu Warke and wife Saroj Warke, Dr Warke started HiMedia and commenced with the production of a portfolio of some key ready-
to-use culture media for scientists, researchers and small companies. Dr Warke reminisces,
“HiMedia started manufacturing culture media over 40 years ago expressly to serve the Indian users with home grown substitutes without compromising on quality.”

Braving the challenges
But, the trajectory of the company’s founders to build an empire out of a business that began from a kitchen has definitely not been easy. Trials were many and the triumphs hard-won. Dr Warke even recalls going door-to-door of companies who needed HiMedia’s products and trying
to convince them to change their foreign vendor and start buying from a domestic provider. But, they braved the challenges and set about changing the minds of the disbelievers and naysayers, though its took a lot of time, effort and ingenuity. For instance, Dr Warke used to supply free samples of his products, so that the customers can make their own mind about the quality.
Gradually, HiMedia’s ability to walk the talk by providing what was needed, both qualitatively and quantitatively, at a price which was much lower than its global competitors, won over even the toughest sceptics. The winning combination of quality with affordability gained a lot of popularity the company’s products. 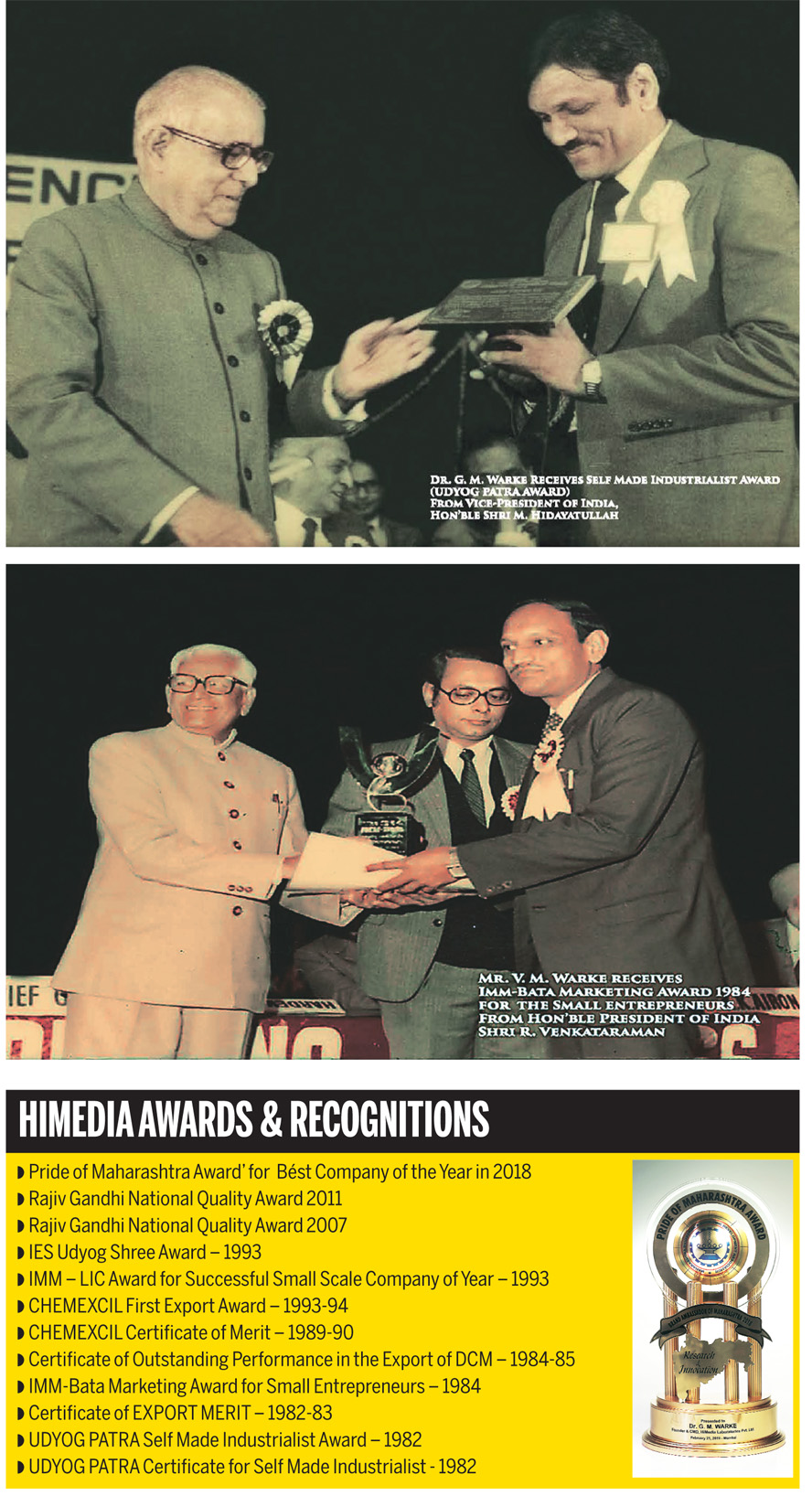 HiMedia was soon able to not only carve its niche in the domestic market but also fledge its wings in the global arena. Within a few years of its inception, it found an export market in Japan and started shipping its products overseas.

Soaring high
There has been no looking back since then. The company grew from strength on the back of its own technology and its founder members knowledge in this field. Today, it has flourished into a global firm with an eclectic and huge portfolio of over 7000 biosciences products. It exports to all the leading and emerging markets including the US, China, Japan, European Countries, Middle East Countries, Asian Countries, African Countries, Russia and CIS Countries, North- Central-South American Countries including Caribbean Countries and Australia and New Zealand etc. HiMedia also has direct presence in the US and Europe (Germany) to ensure rapid delivery of products and services.

Globally it ranks among the top three suppliers of dehydrated microbiology media and in India, the company owns around 85-90 per cent of the market share in this segment. Dr Warke states, “The global response to quality culture media over the years has enabled us to win the support of distinguished users around the globe. HiMedia’s unique biosciences products are
appreciated globally across 140 countries for excellent quality, accuracy, and reasonable prices.”

Accolades galore
Thus, the company has been instrumental in furthering progress in the biosciences sector and this has gained it worldwide recognition. It has been the recipient of several prestigious awards and accolades. To cite an example, the American Society of Microbiology mentions HiMedia as one of the top three global microbiology media manufacturers in their ‘Handbook of Microbiological Media’. Likewise, HiMedia was honored with the prestigious ‘Pride of Maharashtra Award’ under the category of ‘Bést Company of the Year for 2018’ and has been named as ‘Brand Ambassador of Maharashtra’ for 2018 (Category: Research & Innovation) by Maharashtra Industrial and Economic Development Association (MIEDA).

So, what’s next for this rapidly growing company?
Revolutionising life sciences: With over 70 per cent of the company’s revenues comes from the life sciences sector, it has always been of a major growth area for HiMedia and continues to be one. Informs Dr Warke, “The global medical microbiology testing market is predicted to record a CAGR of around 9.4 per cent during 2019-2024. therefore, right from studying disease-causing agents to clinical testing/trials of drugs, different varieties of high-quality media and other raw materials are demanded in a huge amount by the pharma and healthcare industries. Thus, we understand the enormous opportunities for development in these areas. As the pharma industry is expanding at almost 18-20 per cent CAGR, we are also keen to expand our portfolio in this segment, especially in the supply of varieties of ready-to-use media. We are also upgrading our existing manufacturing units and setting up a new unit for ready prepared media to meet the increasing demands of international markets.”

Thus, HiMedia is on an accelerated growth trajectory but for Dr Warke, it is not about just profits. He is in the pursuit of a larger vision – making healthcare more affordable to the masses. He believes that the impact he can create with his business is huge and explains, “The quality and cost of media and raw materials can eventually decide the total cost and quality of the final products of pharma and healthcare services. If pharma and healthcare industry get the best quality of raw materials and media at reasonable costs, ultimately all the healthcare services and drugs would be cheaper and affordable for the common man.”

“At HiMedia, we have always tried and developed cost-effective best quality media and raw materials using our state-of-the-art R&D and manufacturing facilities so that the final cost of pharma and healthcare products would be reduced to the great extent. And we promise to do it persistently through our research and innovation,” he assures.

Venturing into new areas:
HiMedia is also dedicatedly working on innovative, new products to serve the bioscience community. This is evident from its ever expanding portfolio of new-age products across arenas such as animal cell culture, plant tissue culture, molecular biology, agroindustry, hydroponics, and others. For instance, the company is a pioneer in the manufacture of veg-peptones and provides an entire gamut of 100 per cent animal-free culture media under the HiVeg range.

The company is also expanding its distribution and technical services worldwide. “Alongwith producing unique, innovative, excellent quality, customised products, our after sales services, niche marketing abilities and huge distribution network are some of our strengths. These ensure that our products are delivered to clients in minimum time with zero delivery issues which are possible due to our extensive distribution network. Currently, we have already collaborated and started manufacturing of ready prepared media in Siberia. We also have our wholly owned subsidiaries HiMedia LLC in Philadelphia, the US and HiMedia GMBH in Einhausen Germany. In addition to this, we are in the process of setting up the offices in countries like Dubai, China, Thailand and Philippines to cater to the nearby countries,” updates Dr Warke.

Thus, it has several plans in the offing and while Dr Warke didn’t divulge a fixed sum, he informs that significant investments would be made to fortify the company’s growth prospects in the times to come. In times to comeThus, the company is now poised to grow exponentially in the coming years. And, with the next generation, Dr Vishal G Warke, Dr Rahul G Warke and Dr Rajas V Warke, infusing new energy into the company, it is gung-ho on growth and raring to achieve new heights of glory.

Whether it will be able to sustain the same pace of growth in the years to come, is a question which only time can tell. But, what’s undeniable is the fact that that the company has been a trailblazer and written its own formulas for success.