What went wrong with the Coldbest cough syrup that affected 17 children and killed 12 of them in Jammu and Kashmir? It’s the lackadaisical attitude and laid-back approach of the industry

Recently, 12 children in Jammu and Kashmir died after consuming Coldbest PC cough syrup. Manufactured by Himachal Pradesh-based Digital Vision Pharma, the syrup contained over 30 per cent of diethylene glycol (DEG), a known harmful impurity. Investigations, first led by a team of doctors from Postgraduate Institute of Medical Education and Research (PGIMER) and later by Regional Drugs Testing Laboratory from Chandigarh revealed that the deaths were caused by the presence of 34.97 per cent DEG in the syrup.

According to KV Surendranath, Senior Vice President, Global Sites of US Pharmacopeia, DEG is a poisonous compound whose presence in medicines and foods can lead to acute renal failure. “DEG was found to be a contaminant in one of the inactive ingredients (excipients) — propylene glycol, a common solvent used in liquid pharma products — in Coldbest cough syrup,” he told Express Pharma.

The cough syrup has been pulled off from the market and its production has been stopped. The Himachal Pradesh Government has lodged an FIR against Digital Vision Pharma and suspended its licence after receiving information from the drug controller of Jammu and Kashmir.

So, what went wrong?

Well, there are several theories but all of them point towards flagrant misdoings or negligence on the part of the stakeholders involved, be it the manufacturer or the regulators.

A whistleblower and social activist informs that the manufacturer of Coldbest PC syrup mistook DEG for propylene glycol. While the former is an anti-freezing agent, also used to make polymers, the latter is a food additive and an excipient. So, how can this mistake happen? Experts inform that impurities like DEG can find their way into the supply chain through mislabeled products, human error or intentional adulteration by manufacturers or suppliers to achieve higher profits.

However, Surendranath feels that it was not a mistake because it is a very well-known fact that DEG is poisonous. He adds, “Even if there was a mistake in procurement, the manufacturers should have tested the ingredients like propylene glycol for the presence of DEG and other contaminants as per the pharmacopeial standards and GMP best practices.” The incident in Jammu and Kashmir may have been avoided if propylene glycol used in the cough syrup had been tested for the presence of DEG and other poisons, he opines.

Koshia also shares this view and states, “As a law of the land, any raw material being used in the pharma product must be tested prior to its use — both the supplier as well as the manufacturer must do the same. In the Jammu and Kashmir tragedy, if the quality of propylene glycol would have been tested carefully, it would have got caught then and there only.”

Experts highlight that regulators sometimes have a lackadaisical attitude and a laid-back approach, not paying enough heed to the enforcement of Drugs and Cosmetics Act which leads to such tragic incidents. Surendranath points out, “When it comes to impurities, both in raw materials and excipients, it is required to be tested by the food and drug laws, but not many regulatory agencies enforce them strictly.”

“People in the industry – be it a regulator or a stakeholder, sometimes tend to let go of the effective enforcement of the Act. And, the citizen becomes a sufferer,” underlines Koshia.

Nakul Pasricha, President, Authentication Solution Providers’ Association (ASPA) also highlights that there are various issues that are triggering the growth of sub-standard and spurious medicines in systems, including government’s reluctance to acknowledge the existence of gravity of the problem; inadequate legal framework and insufficient sanctions and penalties; weak administration measures, not focused on fighting counterfeit products; ineffective control of manufacturing, importation and distribution of medical products; pricing policies, brand awareness, fragmented distribution channels, unregulated internet trade; and gaps in oversight of third-party manufacturing.

An email sent to Drug Controller, Drugs and Food Control Organization, Jammu and Kashmir by Express Pharma to get their views on this issue received no response. 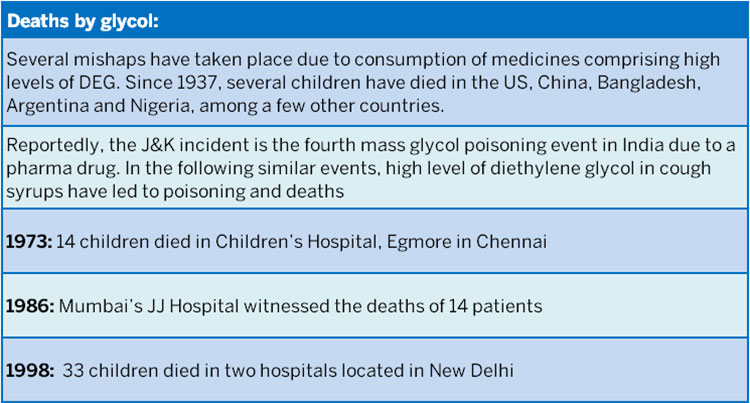 Lessons for the future

It is clear that there have been several lapses and blunders. While the tragedy cannot be undone, we need to avoid such mishaps in future. So, how do we go about it?

Take a leaf from the US Handbook: In 1937, the US had experienced mass glycol poisoning and as a result, a federal law was enacted that requires drug manufacturers to prove the safety of their products before being marketed in the country. Under the United States Pharmacopeia (USP), there is a national formulary/propylene glycol standard, which was modified in the last decade to include testing for the presence of the impurity DEG. It works with pharmacopeias, regulators and industry to strengthen supply chain integrity and guard against incidents like the most recent DEG poisoning.

“In recent years, the United States Food and Drug Administration (USFDA) increased enforcement of regulations for testing of inactive ingredients in medicines (excipients). In the last three years, FDA issued over 50 warning letters to drug manufacturers in the US and other countries, including India, citing deficiencies in ingredient testing. Eleven of the warning letters cited inadequate testing for DEG. The Food and Drugs Cosmetic Act of India has also explicitly called out the need for testing raw materials and excipients. However, compliance by manufacturers and enforcement needs improvement,” highlights Surendranath.

On a positive note, USP has a Memorandum of Understanding (MoU) with the Indian Pharmacopeia Commission (IPC) for mutual scientific exchange programme, and has formed a working group with the Central Drugs Standard Control Organization (CDSCO) to share technical knowledge and assistance for developing the capabilities of national drug labs.

Enable quality assurance and quality control: This involves maintaining the integrity of supply chain, enactment of regulations and compliance to pharmacopeial standards and commitment to transparency by manufacturers and supply chain providers to ensure primary standards. While quality control is product-oriented, quality assurance is process-oriented.

Quality testing is required by law, but poor compliance by raw material suppliers, distributors and manufactures to test pharma ingredients, continues to be an issue. Complexity of the pharma supply chain requires greater regulatory focus on strong quality controls for raw material testing.

Pasricha outlines, “There are five important quality assurance functions and one among those is assuring quality of products. There are two responsibilities, at the brand level and at the regulatory level. First, brand owners must ensure that the products they produce reach consumers without any tampering, diversion and pilferage. In this, the regulator plays an important part as constant enforcement helps plug diversion of genuine products and infiltration of spurious products. However, in order to support and strengthen this effort, we need an authentication/traceability ecosystem.”

Tighten regulations for domestic drugs: It is high time that the regulator implements serialisation in India. “In 2011, the Union government had determined that it needed to protect the reputation of its exports and of the pharma industry, and they thus implemented serialisation for all drugs, leaving India. Customs officials were empowered to stop shipments which did not have serialisation. In 2018, the Drugs Technical Advisory Board (DTAB) recommended that the top 300 pharma brands in India should have an anti-counterfeiting solution, namely application of a unique code to each consumer-level pack coupled with SMS-based authentication of that code. However, they asked for it to be voluntary and so far, it has not progressed much. They are still committed but since it is voluntary, the adoption is not yet as high as expected,” reveals Pasricha. “There is no mandatory regulation for domestic drugs. Although, some are coming for public procurement but that is not for the private sector,” he adds.

In addition, online selling of products like medicines need clear regulatory guidelines, strong enforcement as well as adoption of solutions that can empower consumers to check the authenticity of medicines for themselves, suggests Pasricha.

Expand knowledge base: Manufacturers must have thorough understanding of the ingredients they use in medicines and should avoid shortcuts. Surendranath advises, “There is no shortcut to quality. There should be procedures and protocols in place to maintain the quality of materials, not only raw materials, but also excipients (India depends on imports of about 70 per cent) for its raw materials and APIs). Further, it is important for the manufacturers to have knowledge about the quality of the ingredients and the risks associated with their quality.”

A recommitment to save lives

Industry doyens outline several measures, which, if implemented, will definitely go a long way in plugging the gaps in our current systems. As Koshia emphasises, pharma is a pious profession and it must be treated that way. “By producing quality medicines, we save millions of lives and give life to billions, but if we ignore some parts of our functioning, it will have a bad effect on society,” he cautions.

Hence, manufacturers need to be more conscientious and responsible in their practices while drug regulators should be more vigilant, proactive and meticulous in the enforcement of laws. Together, we have to ensure that all possible measures are taken to prevent mishaps like the one in J&K because every life is precious and as an industry, we are committed towards saving it.

“Leaders need to embrace uncertainty, explore new opportunities that any crisis brings along”