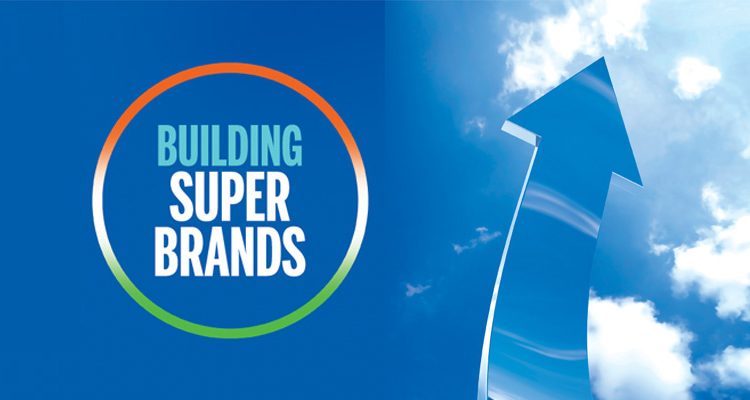 Known as the ‘Sinarest company’, Mumbai-based Centaur Pharma has proved that super brands can be nurtured by mid-sized pharma companies as well. Express Pharma analyses how the company took on more established pharmaceutical companies to create ‘Made in India’ super brands in the hyper competitive anti-cold space. Not just in India, but in some overseas markets as well. But can Centaur Pharma replicate this success? By Viveka Roychowdhury

How do you value a brand bagging two prescriptions every second? A brand accounting for 60 million prescriptions a year? Probably the only brand to have bagged the Brand of the Year award for five years in succession at the AIOCD-AWACS Awards in Marketing Excellence?
This is Sinarest, the flagship brand of Mumbai-based Centaur Pharma, which claims to be India’s No.1 anti-cold brand since 1996. In fact it is the No 1 in Cambodia and Uganda as well.
Established in 1978, the company today is ranked a modest 34th by prescriptions (SMSRC) and ranked 50th by sales as per AWACS. The ranking may be low, but the company has 17 brands ranked No. 1 in their segments. Centaur is India’s fourth-largest ophthalmic company by prescriptions with a market share of 24 per cent. Besides the domestic market, the company exports to 110 countries in five continents.

Starting small
But the Sinarest saga started in rented facilities in Kalina, then a small suburb of Mumbai. The founder, Shivanand Sawant, Chairman and Managing Director, recalls that in around 1972-73, the German principals of his company, Indo Pharma, decided to exit the country. He vowed that he’d rather turn an entrepreneur than search for another job. Centaur Pharma thus took shape in 1978. The name is an allusion to the legendary centaurs, the half man-half horse beings from Greek mythology, known to be gifted in healing and medicine.

As Indo Pharma wound up operations, Centaur Pharma started with manufacturing contracts with E.Merck, Boehringer, Boots and German Remedies. The company soon outgrew the Kalina facility and set up a formulation unit in Goa in 18 months flat, a record for that time. As Sawant confesses, there was no strategy other than to be self-employed and build his retirement corpus. He planned was to pull out after two decades either via an IPO or selling stakes.

In 1999-2000, the company came close to finalising a sellout. Sawant recalls how negotiations went up to very advanced levels with two MNC pharma companies before the deals fell through. On another occasion, there was an offer to buy the Sinarest brand but Sawant refused to sell the brand with which the company was identified. The bid for Sinarest perhaps made him realise that the company had created enough value. And all the painstaking efforts over the years to build such brands would be wasted if he sold out.

He then shelved all plans to sellout and with the help of ex-colleagues and friends from the Indo-Pharma days, drew up a more strategic long term blueprint for the company. He decided to invest in a new manufacturing location, in Pune this time, with a focus on exports. Today, the company’s revenues are a balanced mix of domestic sales (52 per cent) and overseas (48 per cent).

Second generation in the saddle
Today, Sawant is emphatic that there is no intention of selling out. While his brother Dr Shreekant Sawant, who was was earlier working with Ciba Geigy heads the API team, the second generation is now involved with the company at senior roles. (See box: GenNext at Centaur Pharma) His eldest daughter, Dr Smita Phal, is a doctor with an MD in clinical pharmacology and an MSc Biotechnology from Scotland. As a Director, she handles the international business. 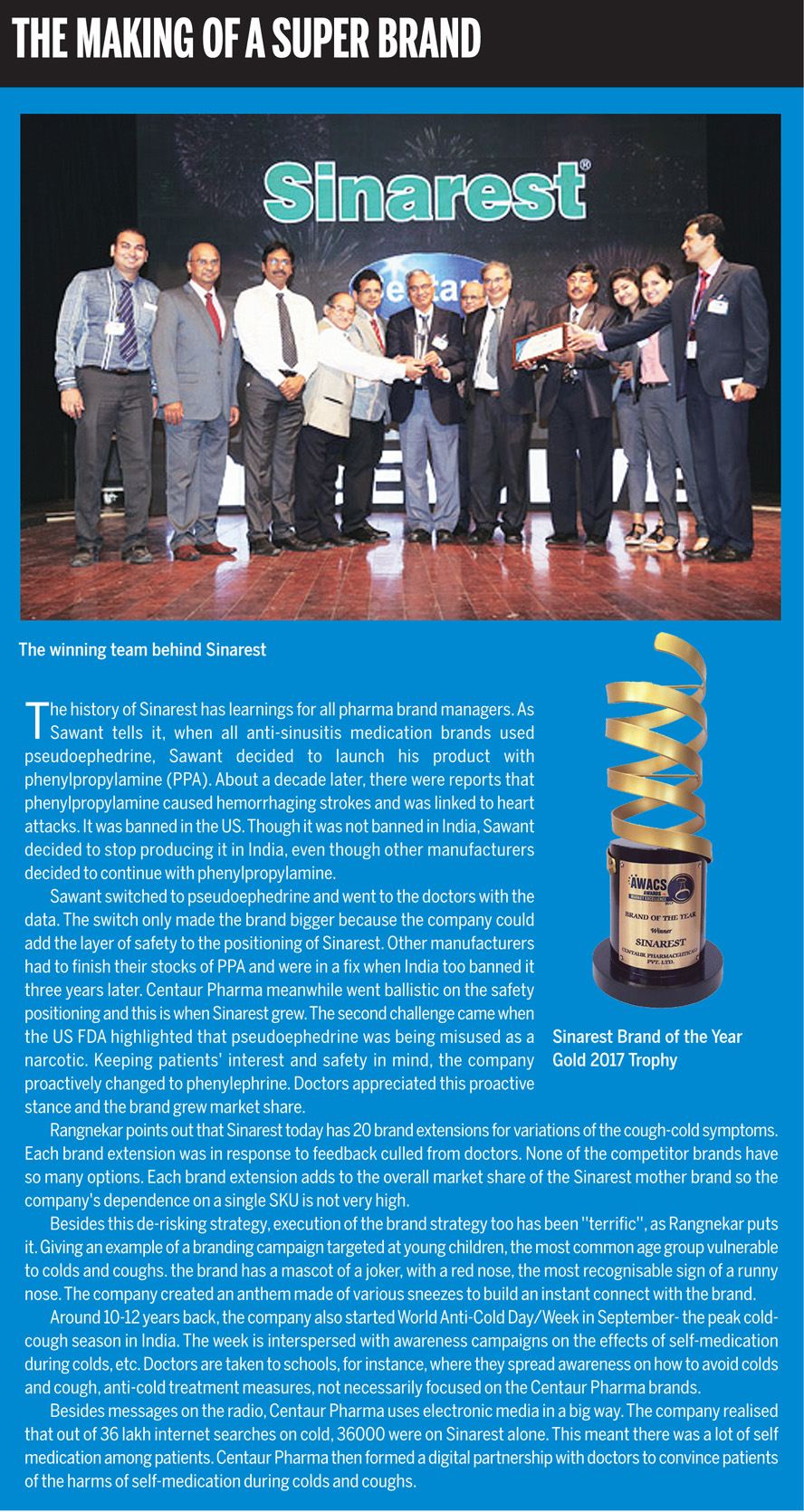 The second daughter Rakhi Kadam, a commerce graduate with a law degree specialisation in IPR is Director- Legal and is responsible for IP and legal matters. Supriya Desai, the youngest daughter, is a BSc Tech from UDCT, has a Masters in Marketing Management from Narsee Monjee Institute of Management Studies followed by an MS in pharmaceutical science from the University of Missouri, US. She is general manager operations, with overall responsibility of the Pune facility.

Sawant’s ex colleague’s son, Dr Amit Rangnekar joined the company straight after his graduation, worked his way up the ranks and is today vice president, supply chain management.
Most employees at the senior levels have spent decades in Centaur Pharma. For instance, Rangnekar narrates how Ajay Kumar Handa, who is today president, heading marketing and HR for the domestic business, has been with the company for three decades. 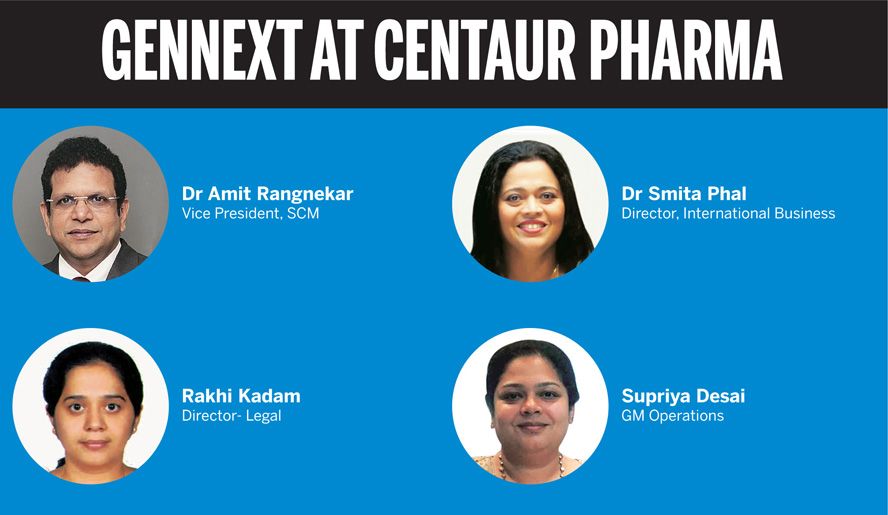 He joined as a medical representative and rose up the ranks. He played a very pivotal role in building blockbuster brands like Sinarest (worth Rs 250 crores), Kofarest (Rs 40 crores) and the ophthalmic range (Rs 45 crores).

A bumpy road
The company went through a challenging time when the Pune plant took longer than expected to get commissioned. This put a drag on the company’s cash flow for around four years. Realising that they needed the funds, around 2005-06 Sawant took a loan from the Small Industrial Development Bank of India (SIDBI) in lieu of a significant minority stake of 23 per cent holding in the company. The original investment from SIDBI of Rs 30 crores, valued at around Rs 110 crore.

When SIDBI wanted to exit in three years after the term of the loan, Sawant approached the Aditya Birla and Tata groups. In 2009-10, these two groups jointly funded the buy-back. Centaur Pharma was able to pay back the entire amount in three years. The company is currently debt-free and Sawant does not feel the need to raise any loans for further expansions. The directors hold 90 per cent of equity, while family and friends hold the rest. But Sawant does not rule out some dilution to future partners for their technology.

… to a promising future
The founder chose to focus on psychotropic APIs because the CNS molecule is very small molecule in terms of size, and is active in minute doses, ranging from 0.125 mg, 0.25 mg, 0.5 mg, 1 mg, 10 mg. So the investment is proportionally lesser than larger dosages. Sawant decided to strategically keep away from molecules which required production in tonnes as it required much more investment. 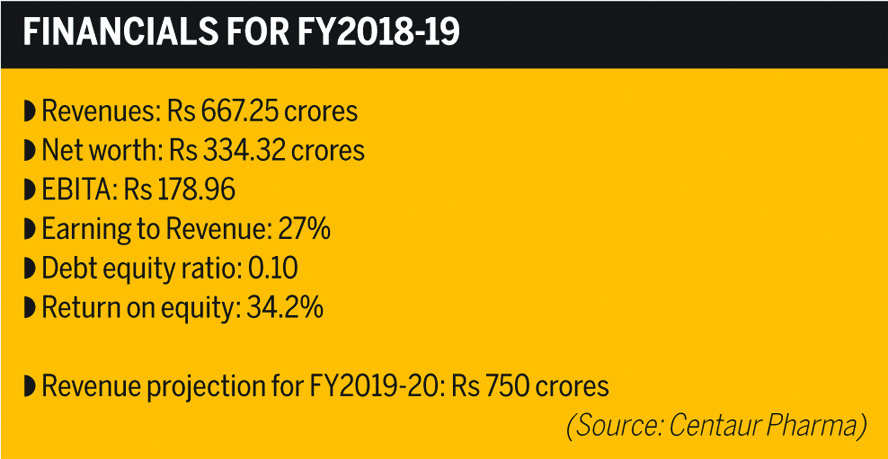 Secondly, large batch sizes made it more difficult to be flexible to market demand. And thirdly, quality could be easily controlled and monitored in smaller batch sizes. But the technology to manufacture CNS molecules was also tough. For example, Sawant points out that diazepam had an eight-step manufacturing process, which is today cut down to half. The company could easily backward integrate to control the quality of the input intermediates and ingredients.

Today Centaur Pharma outsources these steps exclusively to trusted third party intermediates suppliers. Quality at these suppliers is monitored by a Centaur team based at these facilities, which includes both managerial as well as analytical staff. Using the same philosophy, Centaur Pharma is now concentrating on eye drops as the API requirement is small. And the company is also considering anti-diabetic and cardiac molecules as these APIs too have also become smaller and more potent.

Super Brands in the pipeline
Centaur Pharma’s blockbuster brands have set high benchmarks (See box: The making of a Super Brand). The company’s next big offering could be a patented new chemical entity, DPOCL, presented as a wet bandage for the treatment of diabetic foot ulcer. DermaPro was invented by a doctor from Germany, who had done the Phase 1 trial. Sawant took forward the Phase 2 and 3 trials in India. Centaur Pharma will have the development and distribution rights for India, SAARC and RoW markets while the German collaborator, CytoTools, will purchase it from them to market it in Europe.

DermaPro has reportedly received market approval subject to local production in India in March 2017. The Indian Pharmacopoeia Commission (IPC) has since conducted equivalence studies and certified that the product manufactured at Centaur Pharma is equivalent to the German product. Sawant is confident that they will get marketing approval in due course of time.

Besides demonstrating rapid and effective wound healing in patients with diabetic foot, Phase III clinical trials in Europe for venous leg ulcer and diabetic foot ulcer need to be repeated. In a country like India with a high diabetes burden, any treatment for diabetic foot ulcer would have a large market. According to Rangnekar, this treatment could prevent amputation and loss of limbs in many diabetic patients. Unfortunately, regulations for clinical trials in India went through a complete re-working over the last few years and the DPOCL project got caught in the backlog. The trial data is reportedly being reviewed by the authorities and the company is expecting a decision in due course of time, possibly by this year-end.

Sawant reveals that the Phase 1 trial for DPOCL was spread across 16 centres, spread across India, including the north east. Phase 2 was across an additional eight centres, making it a total of 24 centres across India, with around 100-120 patients. Another potential big brand for Centaur Pharma could be Renadyl, a probiotic formulation positioned as a pre-dialysis treatment. This is a proprietary product of US -based Kibow Biotech to help maintain healthy kidney function in the chronic kidney disease (CKD) space. The company has rights to India, RoW, South Africa and Russia markets.

Building brands based on unmet medical need
The company has had to evolve along its four-decade plus journey. The initial years had a general practitioner-focused strategy. Brands like Sinarest and Kofarest had the company concentrate on paedriatricians and ENT specialists. Around 2010, the company changed its focus to specialists and today, Rangnekar says that almost two thirds, 67 per cent, of their prescriptions are from consultants. Sawant discloses that henceforth, the focus will be on chronic therapies in the cardiovascular space, and they are on the lookout for good tie-ups.
The way forward involves four basic strategies. Firstly leveraging integration synergies between its API, formulation and contract research arm, Lifesan. The second aim will be to sharpen its international focus. Tying in with this, is its third goal of entering into strategic alliances as well as its fourth objective of in-licensing molecules.

The company has three such collaborations so far. In addition to the alliances with Kibow Biotech and CytoTools, Centaur Pharma tied up with Japan’s Senju Pharma to launch timolol LA eye drops for glaucoma and bromfenac for NSAIDs.

Price of success
The success of Centaur Pharma’s Super Brands like Sinarest and Kofarest come with the challenge of counterfeits. The company has deployed anti-counterfeiting measures like holograms, with an eye to update these measures on a regulary.

Sawant sees both opportunities and challenges for the second generation. On the policy side, he says, ”Price control (of medicines) is a reality not just in India but across the world. So we should accept it. The modality (for price control) should be decided, either it should be left to market forces or there are two prices, the trade and the government prices, as is done in the UK.” His reasoning is that price control should be market or competition based and should be realistic. If doctor’s fees have increased over the past decades, so why cannot medicine prices also rise, he asks. A question that the next generation leadership will no doubt pursue as they take his legacy forward.

Facing headwinds in US, Natco Pharma looks to scale up business in China