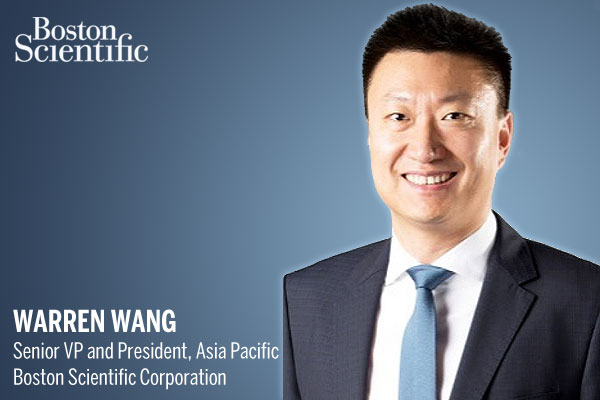 Boston Scientific Corporation has announced the appointment of Warren Wang as Senior VP and President, Asia Pacific, effective January 1, 2018. He will serve as a member of the Boston Scientific executive committee and have responsibility for overseeing the company’s continued growth in the Asia Pacific region.

With extensive experience in the medical technology industry, Wang currently serves as President and MD, North Asia, Boston Scientific, and leads the company’s business in China, Hong Kong, Taiwan and South Korea. He joined Boston Scientific in 2012 as VP and MD for China.

“The opportunities and complexities of the Asia Pacific healthcare market offer new inroads and alternatives in the advancement of market appropriate medical technology and access to high quality care,” said Mike Mahoney, Chairman and CEO, Boston Scientific.“Wang’s experience and keen sense for developing new business collaborations have had a strong influence on our growth in North Asia. We look forward to Wang’s continued leadership in his new role as we pursue our mission of transforming the lives of patients through our innovative medical solutions.”

Wang will succeed Supratim Bose, who will retire as executive vice president and president, Asia Pacific, Middle East and Africa (AMEA), at the end of 2017.

“I thank Bose for his many contributions during his distinguished career at Boston Scientific,” said Mahoney. “The AMEA region has grown significantly over the last five years. Bose’s leadership and commitment to our customers and patients will have lasting impact on Boston Scientific and the medical device industry.”

Prior to joining Boston Scientific, Wang held roles of increasing responsibility with the medical device businesses of Johnson & Johnson, including general manager of the orthopaedics group in China, and leadership positions for the company’s surgical and orthopaedics franchises.

Glenmark’s Saldanha takes over as president of IPA

Aurobindo Pharma gets US FDA nod for heartburn drug