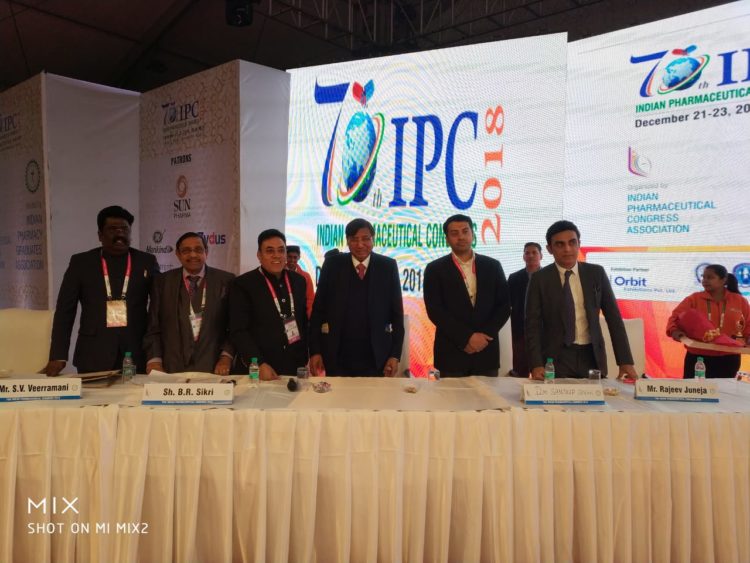 Day one of 70th IPC commenced with a lot of positive vibes and expectations about building a bridge between industry and academia for future progress. In one interesting segment industry leaders and entrepreneurs shared inspirational stories about their journey success. BR Sikri, Chairman LOC-70th IPC; Managing Director ABS Groups of Companies and President, FOPE moderated the session and encouraged the students to follow in the footsteps of successful entrepreneurs.

J Jayaseelan, Director, Delvin Group of Companies shared his dreams and the difficulties he faced and overcame in the initial days of career. He informed that he commenced his journey with Torrent Pharma, a fast growing company which gave a boost to his career. Later, he joined Eli Lilly which taught him pharma marketing techniques such as divining what doctors need from pharma companies and how to make one’s brands prominent. Then, he worked with Sun Pharma which gave him a platform to understand the model of entrepreneurs, followed by a stint in RPG Lifesciences. He informed that the learnings and experience gathered by working in all of these renowned companies gave him the confidence to start his own venture, Edict pharma. Understanding the industry’s requirements, he started his new operations in different segments like API, research and CRO. In his closing remark he said that one idea can give you multi-million avenues so think innovative and hardwork always pays off.

Later, Sandeep Singh from Alkem who is furthering and nurturing the legacy of his father and grandfather is now leading his company towards continued progress. In his speech he said that we need a fire in our belly and acceptance to challenge. He also shared the learnings from the company’s mistakes in its earlier days. He said that the company was busy enjoying its successes and missed out many promising therapeutics business opportunities and international business opportunities. In his closing remarks he said that one thing everyone should know is that while enjoying success one should also keep their eyes open on other opportunities and tap them at the right time.

SV Veeramani, Chairman and Managing Director, Fourrts also took the stage to share details about the commendable role he has played in the growth of the Indian pharma industry. Twice, as the President of IDMA, he has striven for the industry’s growth. He also shared success stories of his own company Fourrts Laboratories and highlighted how they faced and overcame challenges to establish its presence globally as well as in India through their own products.

Later, Rajeev Juneja, CEO, Mankind Pharma shared his tale in which he mentioned that unlike any other successful company, Mankind has less of failures and more of success. He joined his brother’s venture Mankind Pharma at the age of 18 years and though he made many mistakes, he also learned from them. He informed that his goal is to make Mankind Pharma India’s largest company. He also shared that one cannot become successful without team cohesiveness and it is very important. Constant upgradation of knowledge and carving your own niche were other factors he laid emphasis on for success.

Ashok Kumar Chauhan, Chairman, Amity University also shared his success story. He stressed that for a successful life, a person has to decide his goals, believe in them and work towards them relentlessly.