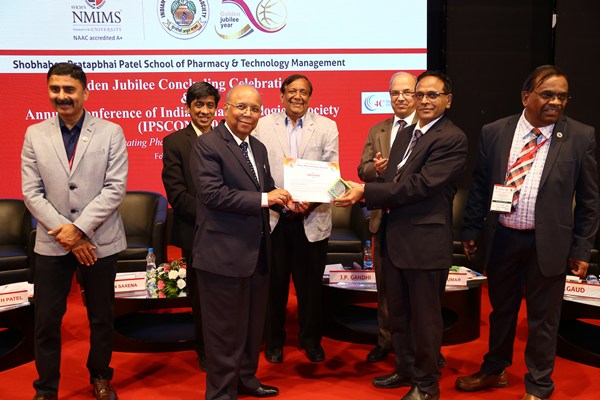 Chief Guest of the ceremony Dr Shashank Joshi, Endocrinologist stressed that modern research should be integrated with traditional system of medicine. While lauding the efforts of Japanese, Chinese and Korean researchers, Dr Joshi directed a question to the audience asking “why can’t we (Indians) have largest research output?”

Dr Joshi made a special mention of NMIMS while congratulating the University on winning two global patents. He also appreciated the organisers as the conference saw large number of participants in his keynote address.

Chairman of IPSCON 2017 Local Organizing Committee, Dr RS Gaud, Director, NMIMS Mukesh Patel Technology Park, Shirpur & SVKM’s Pharma Institutions, while welcoming the delegates and dignitaries, presented an overview of NMIMS as an educational institution. He stressed on the need for introduction of more paramedical courses and more jobs in pharmacovigilance.

Dr Addepalli, Organising secretary, IPSCON 2017, while presenting an overview of IPSCON-17 emphasised on the fact that health is major concern to mankind. “While quality of healthcare systems is increasing in our country, we are still lagging behind in tackling lifestyle diseases, which pose major challenges to human quality of life. This conference is proof of SVKM’s NMIMS commitment of national health care,” he added.

Guest of Honor, Dr Jayant Gandhi, Hon Jt. Secretary SVKM and Mentor SPPSPTM, SVKM’s NMIMS congratulated Dr Joshi on his achievements and stressed on the importance of conference theme which is ‘rational use of drugs’.

Guest of Honor Dr. Rajan Saxena, Vice Chancellor – NMIMS, while offering a holistic view of the current health scenario of Indians said that though India is a youngest nation, there is growing segment of senior citizens and that the problems of ageing population should be well addressed.

While drawing attention to the lifestyle diseases which have been a major challenge, Dr. Saxena stated it has opened major opportunities in several sectors.

“Sedentary lifestyle and increasing stress levels are taking a toll on young population in this country,” he added.

Dr Dinesh Kumar, President, Indian Pharmacological Society (IPS) in his presidential speech gave an overview of IPS journey which has grown into a big organisation in the last fifty years. He said that the goal of society is that affordable and quality medicines should reach the common man.

While informing about the World Conference he said that “India has potential drugs discovery group which is very strong in traditional system of medicine.”

Past Presidents, General Secretaries, Treasurers, Chief Editors and RC-Organizing Secretaries of IPS were honoured on the occasion by the Chief Guest and Guests of Honour.