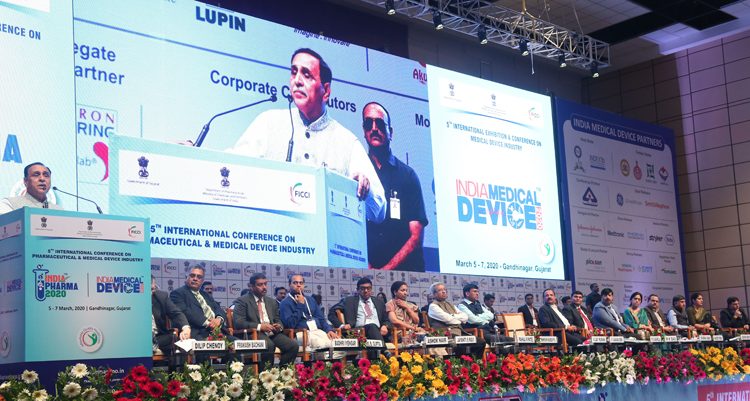 ‘India Pharma and India Medical Device 2020’, organised by FICCI, jointly with the Department of Pharmaceuticals, Ministry of Chemicals and Fertilizers, Government of India is currently undergoing in Ahmedabad. The three-day event will witness a conglomeration of policy makers, national and international leaders from medical technology industries, academic and research fraternity.

DV Sadananda Gowda, Minister of Chemicals and Fertilizers, said that the Indian pharmaceuticals and medical devices sector has the potential to become the world leader and government will provide all necessary support. According to him, India today is a major hub for medical devices and diagnostics. There has to be certain interventions by the government as far as polices are concerned.

Speaking on the COVID-19, Gowda said that it is challenging times and we should all stand together at this time. Govt has and is taking all necessary steps in this direction. “There is no shortage of medicines. We have sufficient medicines and sufficient APIs so that for another three months to ensure there is no shortage in producing medicines,” he said.

Vijay Rupani, Chief Minister, Gujarat while highlighting the state’s contribution to the national GDP said that Gujarat is one of the few states in the country to provide all necessary support to strengthen the pharma and medical devices companies. He said that the state government is planning to come up with two dedicated parks, one for bulk drugs manufacturing and other for medical devices.

Mr Mansukh Mandaviya, Minister of State (I/C) for Shipping and Chemicals & Fertilizers, Government of India said that today when the world is in recession, Indian pharma sector is growing at 10 per cent and Indian medical devices sector is growing at 20-25 per cent. “India has lot of opportunities and this is not only encashed by Indian companies, but also global players are also investing in these sectors,” he added.

He further added that government is working on bringing new policy to strengthen the Indian API market.

Dr PD Vaghela, Secretary, Department of Pharmaceuticals, Ministry of Chemicals & Fertilizers, Government of India, said that government will be setting up a ‘Pharma Bureau’, which will help facilitate both foreign as well as domestic investment in the pharma and medical devices industry in India. “Pharma Bureau will act as a policy think tank to support the Government as well as the Industry,” he said.

MK Das, Principal Secretary, Industries & Mines Department, Government of Gujarat highlighted the growth of Gujarat’s economy and enumerated various policy initiatives which enabled the state to attract 51 per cent of the country’s FDI.

Pankaj R Patel, Past President, FICCI and Chairman, Zydus Cadila while highlighting the current challenges of the sector said that this is a wake-up call for the sector. “The pharma industry in India, is today the pharmacy of the world,” he added.

FICCI-EY report ‘Reshaping India into a life sciences innovation hub’ was also released during the event.

Without innovation in Ayurveda, we can’t get global recognition: Piyush Goyal