The conundrum of USFDA inspections

Alok Ghosh, Ex-President - Global Technical Services, Lupin, shares insights on the challenges that India Pharma Inc faces with US FDA inspections and talks about measures that can help improve compliance and deal with these inspections in a more effective manner 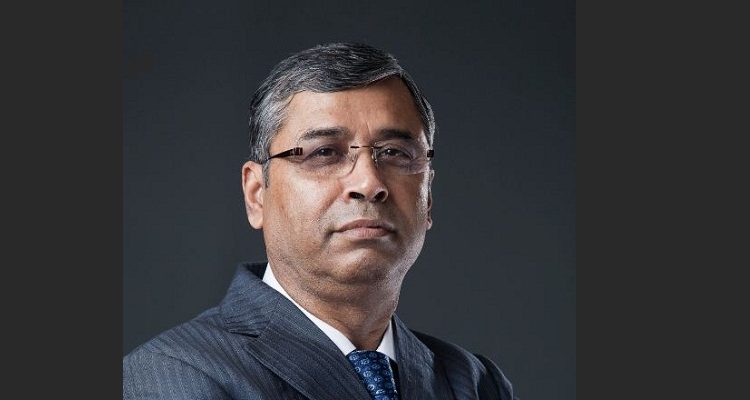 An analysis of the past outcome of USFDA inspections until about 2013-14, shows most of the inspections of Indian pharma companies were classified as either no action initiated (NAI) or voluntary action initiated (VAI). NAI is when at the conclusion of the inspection, no 483 is issued whereas in VAI 483s are issued but USFDA considers that the deficiencies can be mitigated by the firm voluntarily and no adversary official action is required. Today, Indian pharma companies supply about 40 per cent by volume finished dosage pharma products of the US market. So, from the perspective of public safety, regulators in the US are giving much importance to overseas manufacturers like in India. The yardstick and regulatory requirements have also changed dramatically. Most of the Indian companies have failed to improve procedures and processes as the FDA increased the scrutiny.

One of the questions asked is why the large companies presumably having very experienced and qualified technical people and world-class manufacturing facilities have done poorly in last few years whereas smaller companies seem to have not faced much of an issue while clearing FDA inspection? The answer lies how USFDA classifies a company in their database. The classification is done based on the risk profile specifically past inspection history and the volume and number of critical products supplied to the US market. Most of the large Indian companies are today classified as high risk.

Between 2005 and 2015 period was the golden period of domestic generic pharma companies supplying products to the US. Though Ranbaxy was the first company in establishing pharma supplies of generic products in the late 90s, over the next decade, many companies started filing products to USFDA and getting approvals. During the period, most of the companies expanded by establishing multiple manufacturing sites due to increased demand for generic products in the US markets. In the meanwhile many of the blockbuster brands were going off-patent, thereby, allowing generic equivalents to be available in the market, the US government also consciously promoted generic drugs to reduce health care cost in the country. The Association for Accessible Medicines, in their 2017 Generic Drug Access and Savings Report, stated that in 2016 alone, generic medicine generated $253 billion in savings for patients and taxpayers. In the last decade, the US healthcare system has saved $1.67 trillion due to the availability of low-cost generic products.

As the companies expanded, there was tremendous demand for technical pharma professionals to manage the newly established manufacturing facilities. The result, most of the established companies were having 35-40 per cent attrition rate specifically at the lower-level positions. The challenge for HR departments was enormous, not only to retain talents but also to recruit in vacant positions and train employees in their respective skills and the company’s ethos. The pharma industry is knowledge-based and involving trained people in operation always help in compliance with Good Manufacturing Practices (GMP) . Because of the gap between demand and supply, the growth in terms of position and emoluments of pharmaceutical professionals had grown substantially. However, the grind and the scrutiny normally people have while climbing the ladder in an organisation, were lost and many have moved to higher positions in different companies by changing job or within the companies, however, were not ready to manage increased responsibilities. With the typical Indian mindset, many of them compromised the integrity of documentations resulting unearthing of the spurt of data falsification charges during USFDA inspections. The standard operating procedures (SOP) were not followed and violated. In parallel, USFDA had also increased the scrutiny of overseas facilities in view of large quantities of products were getting supplied from these facilities. The gap between the regulatory requirements and the level of good manufacturing practices followed by the companies resulted in serious observations leading to Warning Letters, in some cases with notification of import alert. Added to this was the complacency of ‘managing’ USFDA inspections successfully in the past also played a role.

The annual report by USFDA of 2019 on the State of Pharmaceutical Quality for CDER regulated drugs legally marketed in USA show some interesting insights. The Mutual Recognition Agreement (MRA) with the European Union (EU) resulted in FY2019, 32 per cent of total global coverages of drug quality surveillance inspections. The growing ability of USFDA to depend on the MRA enables USFDA now to allocate their resources to elsewhere preferably India and China by an increasing percentage of Inspections. The profile of inspections carried out by USFDA in FY2019 including classified under the MRA is in Figure 1. 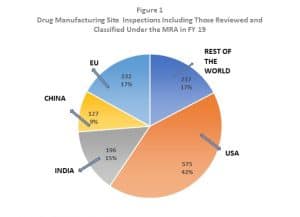 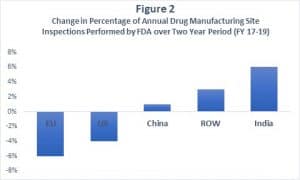 USFDA internally provides site inspection score which is a measure of the site’s compliance to CGMP regulations in a scale of 1 to 10. The average score of all sites inspected in 2019 was 7.4 which is not significantly different than 2018(7.5). However, there were some differences in the score of sites based on geography. For example, the scores of sites in the US and EU are statistically higher than the global average – US 7.6 per cent and EU 7.7 per cent (Figure 3). Whereas the corresponding score for China and India were 7.0 and 6.8 respectively. The data show facilities in China and India must improve substantially to be comparable with the US and EU sites in site compliance score. 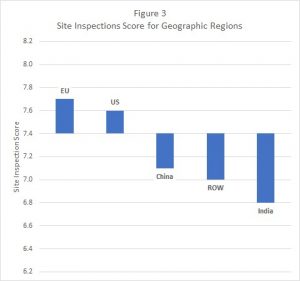 USFDA also published the type of deficiencies observed during inspections in FY 2019. Significantly most observations (58 per cent) were related to CFR subparts covering Records and Reports, Laboratory Controls and Equipment (I e subparts J, L and Din Figure 4). The most cited sections were related to CFR 211.192 (Production Record Review), 211.22 (Responsibilities of Quality Unit) and 211.160 (General Requirements / Scientifically Sound Laboratory Controls). These are the indication of areas of focus for manufacturing facility management to improve overall pharmaceutical quality and inspectional outcome and score higher in site compliance score. 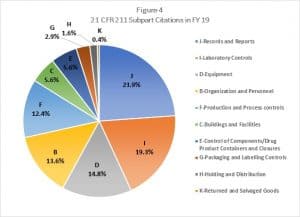 So, what is the way out for the pharma companies to come out of this conundrum?

The answer is to train people adequately to understand the process of good manufacturing practices. At the end of the day, it is the people who would make all the differences. Companies must spend resources in identifying talents and speed up the improvement of their skills in analytical thinking and imbibing values like integrity and transparency. The companies must move out from the mindset of ‘managing’ an inspection to practising diligently validated procedures to be inspection ready anytime. Many of the companies now have taken steps in the right direction with the help of consultants. Hopefully, we will see positive results in future from all the efforts the companies are making to improve compliance to USFDA requirements.