Stree Shakti in the CDSCO! 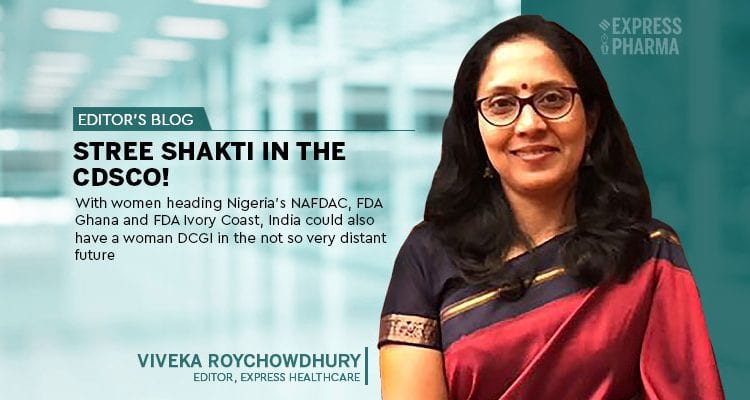 With women heading Nigeria’s NAFDAC, FDA Ghana and FDA Ivory Coast, India could also have a woman DCGI in the not so very distant future

As we celebrate one more Women’s Day, Express Pharma decided to analyse if the pharmaceutical sector in India was keeping up the global realisation that we need to leverage this talent pool and achieve an optimum level of gender diversity.

Previous editions of our Women’s Day coverage have covered role models within pharma companies from functions as varied as pharma marketing, R&D, clinical trials, production, as well as academia. But the common refrain from these role models was that they would rather be celebrated for their achievements as professionals and hence we’ve discontinued this practice.

Looking beyond corporate pharma roles, we found that over the years, women have been rising up the ranks of India’s pharma regulatory framework. Among the bureaucrats, we have Shubhra Singh as Chairperson, NPPA as well Ritu Dhillon, Member Secretary, NPPA. Other seniors include Preeti Sudan, Secretary, MoH&FW, Dr Rachna Paliwal, Research Officer(H), Ministry of AYUSH and Rita Teaotia, Chairperson, FSI who was also one of the rare women to be Commerce Secretary. Payal Saluja, Principal Technical Officer, CDAC and Shruti Gupta,Project Engineer, CDAC, also serve at important posts in the CDAC.

This year, we did a quick analysis and found that the percentage of women officers among the state drugs control officers has shown a steady increase over the years. This is interesting because as the country’s drug regulatory arm, Central Drugs Standard Control Organisation (CDSCO) officials are involved in raids, prosecutions, and other enforcement activities. The common preception is that women generally do not prefer such posts but industry observers point out that the CDSCO still has a fair number of women with drug control roles. Drugs control postings are not dangerous per se but inadequate support staff and lack of mobility make the task a little difficult. But the women in these postings seem to have taken these issues in their stride.

Industry observers quip that with women heading Nigeria’s NAFDAC, FDA Ghana and FDA Ivory Coast, India could also have a woman DCGI in the not so very distant future.

According to data with the All India Drugs Control Officers Confederation (AIDCOC), in terms of percentage of women officers among the state drugs control offices, Tamil Nadu tops at 45 per cent, followed by Jammu & Kashmir (30.59 per cent). Karnataka and Madhya Pradesh both have around 25 per cent as along Andhra Pradesh and Telangana. Punjab (20 per cent), Jharkhand (19 per cent), Gujarat (18 per cent), Maharashtra (17 per cent), Haryana (14 per cent) and West Bengal (11 per cent) are other states with encouraging statistics.

Similarly, four women officers (of 21, that is around 19 per cent) are Deputy Drugs Controllers(I) (DDC(I)). Swati Srivastava is at the CDSCO HQ in Delhi while Shanthy Gunashekharan, is DDC(I) Chennai, Annam Visala in Hyderabad and Rubina Bose in Mumbai.

The Pharmaceutical Export Promotion Council of India (Pharmexcil), the authorised agency of the Government of India for promotion of pharma exports, currently has very limited number of women but two are at very important positions. For example, M Roja Rani as Director and Lakshmi Prasanna as senior regulatory affairs officer, both at the head office Hyderabad.

One hopes that the numbers will continue to build up from the junior levels so that there is a pipeline of qualified and experienced women drug control officers. Will their presence make a difference to the quality of regulation? Or will they be seen as a threat or worse a liability by fellow officers? Changing mindsets takes time. For instance , consider that India’s first batch of women fighter pilots were inducted into the Indian Air Force just last June. Luckily these pioneers, in the IAF as well as the CDSCO, will share their learnings and make it easier for their younger sisters following in their footsteps.