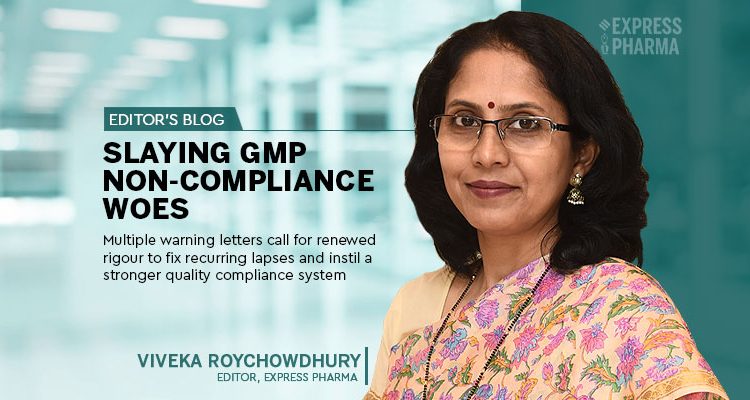 Negative observations from the US FDA continue to shadow big pharma companies from India. Homegrown heroes Aurobindo Pharma, Cipla, Glenmark Pharma, Lupin, and Torrent Pharma received results of site inspections in the past month and the results were not encouraging.

An analysis of the regulatory agency’s observations could throw some light on why these companies, considered success stories for their global growth strategies, are faltering on the quality front.

The repercussions are not just short term, on the bottom line, but on the brand image of these companies as well. For instance, the US FDA’s 483 report, with seven observations post its inspection of Aurobindo Pharma’s Unit -7 from September 19-27 this year, sent its stock into a tailspin of 19 per cent.

Glenmark Pharma’s stock too slid 9.5 per cent after the US FDA issued a warning letter (WL) for its Baddi facility after an inspection from April 15-20, which ended with an Official Action Indicated (OAI). Similarly, Torrent Pharma’s stock dipped around seven per cent after it’s Indrad, Gujarat facility received a WL. Likewise, Cipla’s Goa unit got 12 observations including procedural lapses though the management specified that none were related to data integrity.

Aurobindo Pharma’s clarification that none of the seven observations was data integrity related did help revive the stock a bit. But a closer reading of the 16 pages 483 report does reveal borderline data integrity issues, repeated procedural lapses and a systemic lack of attention to quality control, which need fairly extensive remedial action.

Lupin’s latest WL is its third, which is worrying for a company of its lineage. The September 10 WL based on observations during a US FDA inspection of its Unit 1 at Mandideep, Madhya Pradesh, from November 26 to December 4, 2018, cites similar cGMP violations at the company’s Goa and Indore facilities which also resulted in WLs. The latest WL notes that ‘these repeated failures at multiple sites demonstrate that management oversight and control over the manufacture of drugs are inadequate.’

Companies with long-standing problems are now in damage control mode, with strategic intent to repair lost reputation as well as get ‘fresh’ eyes to assess the gaps. Less than a month after the third WL, on October 03, Lupin bought in a new global head of quality, Johnny Mikell. Most recently Global Head of Quality and Compliance at Apotex, Mikell has also served as the Global Head of Quality and Compliance at Amneal and has also held leadership positions at UCB, Novartis and Bausch & Lomb.

Mikell’s plate is certainly full. The promoter family is looking at him for solutions to help the company “achieve our near-term goal of ensuring that our sites are compliant and long-term goal of being the best when it comes to Quality and Compliance,” as Lupin’s Managing Director Nilesh Gupta put it.

Will Mikell’s over 35 years of experience with global quality operations and compliance in the generics, branded and API segments prevent a fourth WL for Lupin? The company’s Somerset, UK facilities already received an OAI and if the company is not able to convince the regulatory agencies that sufficient remedial action has been taken, this too may result in a WL.

Mikell’s hire renews the debate on the pros and cons of external versus internal troubleshooters – be they auditing agencies, consultants or new hires who find themselves parachuted into the thick of a battle, where the ‘enemy’ could well be within their own ranks.

External experts, be they recent hires or consultants, have the advantage of bringing fresh perspectives and a more objective frame of reference. Internal experts however already have a connection with the staff executing the plans and should thus be trusted to fix the problem. While external experts might take time to understand the nuances of each location, internal experts could be, unwittingly or deliberately, part of the problem itself.

Thus for Lupin, while Mikell might understand what the US FDA’s inspectors want, translating this into reality will take time and investment. Even with the full support and intent of promoters and senior management, one new hire cannot turn the tide for Lupin or any of its peers. Companies will have to introspect, take tough decisions to weed out lax employees as well as identify and re-train staff as well as invest in updations. It is a first step in the right direction but its too early to judge and we hope this bet plays out well for the company.

Multiple WLs, unfortunately, put companies on a ‘repeat offenders’ list with increased scrutiny over other facilities. Often, such cases throw up examples where remedial measures solved one issue, only for another one to crop up in the next inspection. With the burning of the ten-headed Ravana on Dussehra day still fresh in our minds, one pharma wag designated common non-compliances as the different heads of that ill fated king. Very significantly, he left the last one unnamed. Does that mean that the pharma industry in India has to be destroyed completely, so that it can rise phoenix-like from the ashes? As we await Diwali, yet another festival celebrating the victory of good over evil, let’s hope for a similar victory for the beleaguered sector.

We have unlocked the potential of data in the DMTA cycle

We aim to have over 2.5 lakh chemist shops computerised