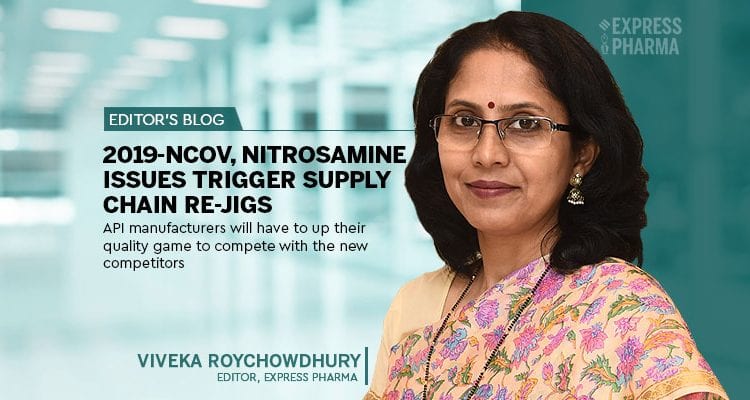 The 2019-nCoV infection, which has clocked 80126 confirmed cases and 2701 reported deaths as of February 25, combined with the nitrosamine contamination episodes over the past year, have pushed many pharmaceutical companies to reduce supply chain risks associated with sourcing APIs from areas outside their jurisdiction, in this case, Asia.

Sanofi recently announced that it will be combining API commercial and development activities at six of its European API production sites into a new company. which would serve both captive consumption as well as supply to third parties. This becomes a separate revenue stream while ‘balancing the industry’s heavy reliance on API sourced from the Asian region’. Sanofi plans to hold a minority stake of approximately 30 per cent in the new company.

Once hived off, and later listed, a Sanofi release estimates that the new company would be the second-largest API maker globally, with approximately €1 billion in expected sales by 2022. Sanofi’s move is a reversal of the trend of the past decade to source APIs from cheaper destinations. Many more global pharma companies could follow suit, diversifying their supply chains and choosing sources which have demonstrated strict adherence to high production standards.

Analysts have forecast that while warmer weather might see the coronavirus infection losing its impact, supply chain disruptions could continue. While it was initially thought that Indian companies, especially in the pharma space, could benefit by stepping into China’s shoes as API supplier to the world, it is now amply clear that this will not happen. At least not to the extent as first expected.

As a Crisil report on the 2019-nCoV fallout explains, other countries including India do not potentially have the scale or size to take advantage of the opportunities available due to disruption in Chinese supplies. It could take significant resources and time to set up additional capacities, by which time China itself might re-commence production.

India imports 69 per cent of its total pharma bulk drugs intermediates from China but since Indian players have already sourced their raw materials and created sufficient inventory for two to three months in view of the holiday period in China, the impact is expected to be moderate in the fourth quarter of this fiscal.

ICRA has in fact already reduced its pharma sector outlook from stable to negative. If the lockout in parts of China following the coronavirus outbreak continues beyond mid-March, the ICRA report predicts that this may adversely impact the production of API manufacturers importing from China, possibly leading to a complete halt of production for some smaller players. Even if certain intermediates can be sourced from other countries, it would be at higher prices which will impact profitability as they may not be able to fully pass on the same to the formulations manufacturers. Furthermore, while they can shift their source of supply of raw materials for exports to regulated markets like the US, it requires refiling the drug master file (DMF) with the United States Food and Drug Administration (US FDA) for approval, which takes about six months. Thus as global pharma rejigs its supply chain, API manufacturers will have to up their quality game to compete with the new competitors.