The most important thing is what the customer needs 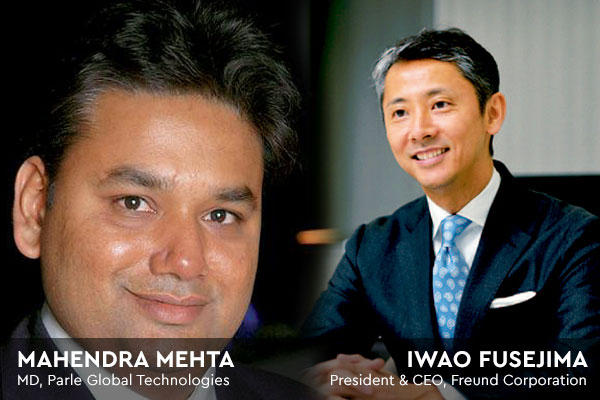 Presenting Japanese technology at Indian cost is the main aim of the joint venture between Tokyo-based Freund Corporation and Mumbai-based Parle Global Technologies. Iwao Fusejima, President & CEO, Freund Corporation and Mahendra Mehta, Managing Director, Parle Global Technologies spoke to Viveka Roychowdhury on the sidelines of the launch of the first product from this JV

Congratulations on the joint venture (JV) between Parle Global and Freund which was announced in December. When and how did the talks for this JV start?

Iwao Fusejima: It took us five years. We met in 2013 when Parle Global found us in Europe at ACHEMA exhibition. After I talked to him, I felt we shared the same values with the Mehta family. My father started Freund Corporation in 1964. Similarly, Parle Global Technologies was set up by Mahendra Mehta’s father,  Rajmal Mehta and when I met his father, he was like my father. Both have had the same entrepreneurial drive and at about the same age. Though he is Indian and I am Japanese, I really felt that we have the same values. I think having the same values from the get-go is the best starting point. It still took us five years to come to this point of announcing this JV.

What kind of a partner was Parle Global looking out for? Are there other JVs, partnerships?

Mahendra Mehta: We started our company in 1974, as a tablet tooling manufacturer, making dies and punches for tablet compression machines (tablet presses). We also were representing many companies from Korea, Japan, US, Germany; bringing their technologies to India as sales and services agents. When we saw Freund’s product at ACHEMA in 2013, we found it to be a good technology. We felt Indian pharma customers were now ready to go up a level. They were managing with locally available technology, and then imported technology from Korea and Italy, but they were now looking for technologies from Germany and Japan as these were at another level. We found the Freund product very efficient. Although it is expensive, we knew that Indian pharma companies are now ready for the next level and would find it affordable because they believe in quality and were moving from semi-regulated markets to more regulated markets.

We approached Freund with a proposition to sell their equipment in India and started selling their products five years back.

After four years of sales partnership, about a year ago, we informed them that some of their products were not convenient to sell from Japan, because of cost compulsions. Manufacturing cost in Japan, where  labour cost is high and then shipping the product, when technologies have already developed over the years. So, we requested them to evaluate manufacturing these in India under the Make in India programme. We have a couple of JVs with companies from the US and Korea. (Parle Elizabeth is a JV formed in 2008 between Parle Global Technologies India and Elizabeth Carbide Die, US.) We were able to give these examples as proof that if these technologies were brought to India and manufactured here, we might be able to achieve good cost benefits without compromising on the quality as the design remains from Japan. They agreed to try out this experiment and sent us all the core parts from Japan and we started looking at how to manufacture the machine here. The roller compactor is the first product made this way which we introduced to the market and launched at the CPhI India show in December.

How is this roller compactor different from the one made in Japan?

Fusejima: There is no change, it is basically the same.

Mehta: That is what is different about this JV compared to other European JVs. The technology generally coming to India is not the same as that launched in European countries. They launch technologies which are becoming obsolete so that they do not feel threatened if it is made in India. Whereas when we spoke to Freund, they said we cannot have two different qualities. The one made in Japan must be the same as made in India. We thought it’s good, because we would like to offer the best technology to our customers, not something that is five or 10 years old.

How is it different from a similar technology from your competitors? What is the value proposition that is being pitched to customers for this product?

Fusejima: Firstly, we have 54 years of experience. Secondly, our strength is that Freund is not just an equipment manufacturing company. We also deal with excipients and chemicals technologies. We call this hard and soft technologies. That makes us unique in the market. The most important part of the success of this JV is to have a place to demonstrate this in India. We have R&D and testing centres in Japan, the US and Italy and now we have one in India as well, through our JV with Parle Global Technologies. Most customers in India had to come to Japan, the US or Italy but now they can just go to the Parle Global facility office to test our machine. This JV also leads to better after sales support, and training to the staff of the customer on the use of the technologies and machines.

In terms of price, does making it in India, result in a more affordable product? Can the Indian pharma SMEs also consider buying such technologies directly? Even though today they may be tapping the semi regulated or non-regulated markets?

Mehta: As of now, we were selling the Freund equipment only to those companies catering to regulated markets. But SMEs represent a big percentage of the market in India. SME companies investing in new projects were finding it difficult to send their material to Japan, or the US and other regulated markets for testing etc, due to regulation issues. This JV gives them an opportunity to use this equipment in their plant. They can at least develop the product in the laboratory available here, even if they decide to use another equipment for manufacturing it. They will be exposed to a better technology to make a very efficient process at the development level. More than the product, Freund makes the process.

Some companies’ equipment might take 14 hours for the granulation process while the Freund equipment could do it in just four hours. There could be that big a difference. Plus, there is a lot of material handling involved, sieving, etc. These are benefits which cannot be shown on paper but can be seen only while experimenting on the equipment. They can see the quality of product produced, plus the savings in terms of time and material, achieved with such technologies, which will have a direct benefit to them in terms of money.

Whenever a customer has come to our plant with a trial product, they are much more convinced with the quality and ready to bear the cost for the value that we are giving them. So, SMEs will be benefited. The bigger companies are already importing from Europe or Japan and might continue doing that from our principals.

If the same technologies are available in India, why would companies decide to continue to import?

Mehta: If the product is for a regulated market like for instance the US, companies do not want to change any of the specifications in the registrations at existing manufacturing facilities. The cost of the equipment is not a major worry for them. Therefore, we are targeting new projects.

What about the intellectual property like design patents associated with this technology and product?

Fusejima: We have a subsidiary in the US. Although the core technology and product are from Japan, they have done some tweaking and changes for their customers. The same would apply in India. We are going to be flexible as far as the design goes. If something needs to be changed for Indian pharma customers, so be it and they just need to let us know about the changes being made. The most important thing is what the customer needs.

What are the financial implications and how is the JV structured?

Mehta: It’s a new entity created as a JV with 51 per cent equity investment from Freund and 49 per cent from Parle Global. Freund is a public listed company, and this becomes its subsidiary in India, like their existing subsidiaries in the US and Italy.

What has been the response to the launch in terms of inquiries, orders from customers?

Mehta: The Japanese concept of manufacturing is that they will launch a product only if they are confident of it. Their engineers came and ran the machine made in India through trials, spent a good time testing the machines thoroughly before allowing it to be offered for sale at P-MEC/CPhI India show. We started taking inquiries and making offers at the show. A few of our customers are always waiting for new technology launches from Parle based on the last 45 years of their experience with us. So, we did have a couple of customers who walked into our stall and expressed an interest to buy it.

This is a unique product, the first in this range, with Japanese technology available at an Indian cost. It will be a good proposition to the market. Granulation has traditionally been a wet granulation, but dry granulation is picking up. Directly compacting the material through dry granulation is picking up because now we have the technology to support this need. The industry was always looking for something more efficient but there was no equipment to support them. Now, we have technologies available from the Europe, the US and Japan to support development of the product through dry compaction. We are happy to be the first ones to launch this technology as a JV product in the India market. The same technology is available in India as well as from Europe through agents, but this is the first such product through a JV made in India.

Just as dry granulation is picking up, what are the other trends that you see in the coming year?

Mehta: Globally, the pharma sector is continuously challenging engineers for solutions. They are faced with issues like counterfeits and material wastage. They want to have a track and trace system so that they can trace their products even up to the last stage of distribution. They want to offer combination drugs so that the patient does not have to take three to four tablets but a single one with its name in eligible print on it so that the name is not just on the foil or bottle, but also on the tablet itself. If possible, even a bar code that can be scanned. We keep working on such inquiries. Freund has been working on printing machines as well as process equipment to improve the efficiencies and save time. Parle Global has tablet compression machines which can make two/three layered tablets as well as tablets within a tablet. These are the innovations we are working on.

Do these inquiries from customers in India have similarities with those that you get from your customers in other parts of the world?

Fusejima: Yes, the trends and inquiries are similar now. There used to be a difference between the US, Europe, Japan and other countries but not anymore.

Mehta: The pharma industry is today globally at a similar level. Major markets are the US, Europe and Japan. All the technologies required are the same. Today, we have so much of knowledge sharing in the industry, with people from across the globe coming to India and sharing their experiences and expectations. As an industry, we are now exposed to a lot of technologies and options which is helping all of us.

Effects of linoleic acid on inflammatory response depend on genes