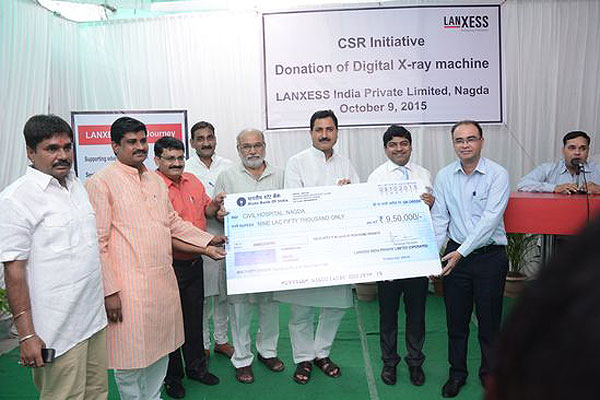 As part of its corporate social responsibility initiative, LANXESS India, the leading speciality chemicals company, has asserted its commitment for technological intervention in educational empowerment by setting up e-learning tools in Government College, Nagda, Madhya Pradesh.

This project is in line with LANXESS’ vision of a digital future and also finds resonance with the current government’s focus on creating a digitally empowered nation.

While the privileged/ privately-run educational institutions have made the most of the available technology, students from the state-run municipal institutions seem to be losing out, primarily due to the financial inability to procure tech-based learning tools.

LANXESS has sought to play a key role to fulfil this gap by providing such infrastructure to underprivileged educational institutions and give an equal opportunity to students.

LANXESS India, in a ceremony held at Civil Hospital, Nagda in the presence of Dilip Singh Shekhawat, Member of Legislative Assembly, Neelanjan Banerjee, Senior Executive Director, LANXESS India, Sanjay Singh, Site Head, Nagda, LANXESS India and other esteemed dignitaries from the state and local administration, formalised the agreement with the State Arts, Science & Commerce College of Nagda to support the institution with seven interactive e-learning tools at a cost of around Rs 1,500,000.

At the same function, LANXESS India also presented a cheque of Rs 1,000,000 to the Nagda Civil Hospital authorities as part of its three-year long commitment to contribute towards the upgradation of the existing facilities and infrastructure of the hospital. The local authorities along with the hospital management presented to LANXESS the need of a sonography machine as the patients, especially, women had to travel long distances to get such basic tests done.

The machine is expected to be installed at the hospital by the end of this year. The Civil hospital has undertaken the responsibility to operate and maintain the sonography machine.