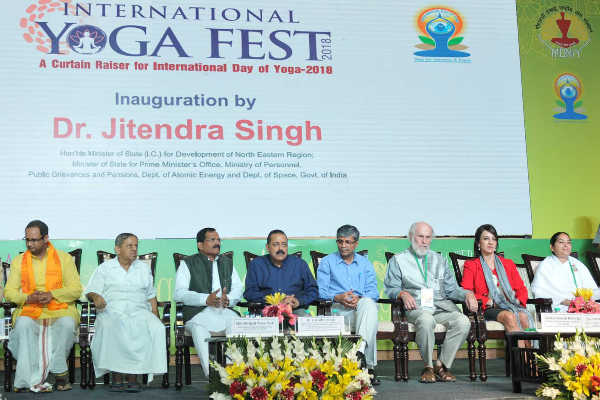 The ministry has shortlisted four cities — Jaipur, Hyderabad, Ahmedabad and Mysore — for holding the main function of International Yoga Day this year

A three-day International Yoga Fest was inaugurated by Union minister Jitendra Singh as a curtain raiser for the International Yoga Day (IYD) to be held on June 21. In his inaugural address, he said under the leadership of the Prime Minister Narendra Modi, more than 140 countries had bonded with India through yoga. The Union minister in the Prime Minister’s Office (PMO) also credited Modi for the formation of AYUSH Ministry and said yoga can play an important role in tackling non-communicable diseases such as diabetes, heart diseases and cancer.

Sripad Yesso Naik, Minister of State, AYUSH, said yoga was the answer to the high pressure lifestyle these days. He said it could bring about harmony between spirituality and technology in an age of tremendous change brought about by advancements in science. He said that was why yoga was inscribed in the UNESCO’s list of intangible cultural heritage of humanity.

“The AYUSH Ministry has recognised yoga’s potential and we are taking all possible steps to promote it at all levels,” he said. Around 5,000 delegates hailing from 16 countries and more than 40 yoga institutions and universities are expected to participate in the fest. Further, the ministry has shortlisted four cities — Jaipur, Hyderabad, Ahmedabad and Mysore — for holding the main function of International Yoga Day this year. These four names will now be sent to the PMO which will select one city and then finalise the venue of the main event. The international yoga fest will be followed by 10 state-level fests to be held in different parts of the country. Also, 100 yoga teachers have been deployed in Indian missions abroad and delegates from more than 16 countries will participate in the event.

“The aim is to build an atmosphere of yoga leading up to the main event and sensitise the masses about the grand function on June 21,” a senior AYUSH Ministry official said.

Alembic Pharma gets three observations from US FDA for Gujarat plant