Home  »  Latest Updates  »  ‘Superbugs: The End of Antibiotics?’ travels from London to Delhi

‘Superbugs: The End of Antibiotics?’ travels from London to Delhi

Inaugurated by the Union Health Minister Dr Harsh Vardhan and Minister of State for Culture (Independent Charge) Prahlad Singh Patel, the exhibition saw how society is responding to the enormous challenge of antimicrobial resistance (AMR) and antibacterial resistance (ABR) 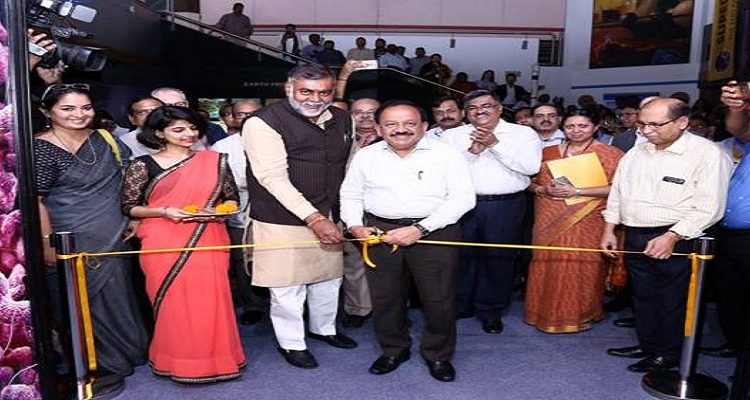 Union Minister of Health and Family Welfare, Dr Harsh Vardhan and Minister of State for Culture (Independent Charge) Prahlad Singh Patel jointly inaugurated the exhibition ‘Superbugs: The End of Antibiotics?’ recently at the National Science Centre, Delhi. The exhibition explored how society is responding to the enormous challenge of antimicrobial resistance (AMR) and antibacterial resistance (ABR), in particular, featuring scientific research from across the globe and personal stories of those waging war on superbugs.

Dr Harsh Vardhan said that it is a matter of great pleasure that a large number of children have gathered in today’s programme. Many times, children are able to accomplish big things, if they are determined. During the polio campaign, children contributed to making the campaign a success by creating ‘polio sainiks.’ He added that he actively practised as a doctor for almost 25 years but apart from two-three antibiotics, he has never prescribed any antibiotics. So, the practioners of medical profession should also exercise caution in this regard.

In addition, a roundtable was hosted by Biotechnology Industry Research Assistance Council (BIRAC) and Nesta Challenges with its focus on ‘the role of rapid tests in the fight against antimicrobial resistance (AMR)’. Held in association with India’s National Council of Science Museums and Science Museum Group, London, the event saw participation from global experts from the diagnostic industry, clinicians and professors, along with leading inventors of the rapid diagnostic tests, to explore how these rapid tests would fit in to clinical pathways in India.

Since the Chennai declaration in 2013, India has mounted a huge effort to address antibiotic resistance. Reflective of this, BIRAC is supporting several Indian start-ups and small- and medium-sized enterprises (SMEs) competing in the Longitude Prize – a global competition to accelerate the development of a rapid, accurate, point-of-care diagnostic test to safeguard the future of antibiotics. Innovators competing in the Prize presented their diagnostic tests to the seminar attendees, including representatives from the Department of Biotechnology, Government of India.

Dr Sundeep Sarin, Advisor Scientist-G, Department of Biotechnology, Government of India, speaking at the event, said, “It is not acceptable that patients still have to wait for a minimum of 24 hours to identify the right antibiotic to kill an infection. This is why the Department of Biotechnology and BIRAC have been collaborating with the Longitude Prize since 2014. We are giving support to Indian inventors and test makers so that they can find solutions that will be used around the world to address AMR.”

Commenting on the outcomes of the seminar, Professor Till Bachmann, University of Edinburgh and judge for Longitude Prize, said, “The potential of diagnostics in addressing AMR has been underestimated and undervalued. The Longitude Prize is a leading driver who has changed this. Today, things are moving fast with new technologies, enabling creation of a range of highly innovative tests that will allow more rational use of antibiotics. The market entry and adoption of these new diagnostics need to be supported so they reach patients as soon as possible.”

Dr Sanjay Bhattacharya, Consultant Microbiologist, Tata Medical Center, Kolkata, said, “It was a unique opportunity to bring test developers together with clinicians and lab experts. This is an important exercise because test developers need to understand the questions we need to answer in hospitals and clinics.”

At the roundtable, four companies that are participating in Longitude Prize presented their solutions. Module Innovations from Pune, India has developed ‘U-Sense’ – a rapid credit card-sized test that detects bacteria causing urinary tract infections (UTI) to help guide effective treatment. The other company from the same city — WeInnovate Biosolutions has come up with ‘RAPID’ – a rapid test that identifies changes in the metabolic activity of bacteria and enables doctors to determine which antibiotics will effectively kill a given bacteria.

Lumos Diagnostics from Carlsbad, USA has brought ‘FebriDx’ – a rapid test to determine whether a respiratory tract infection is viral or bacterial and Attomaker from Exeter, UK has created ‘Attomarker’ – a rapid platform that enables multiple tests to be performed quickly including the c-reactive protein (CRP) test to know if an infection is bacterial or viral.

CII Life Sciences Conclave 2019 to be held in Mumbai