Attended by more than 200 delegates from the industry and academia, the event comprised of plenary lectures, panel discussions, exhibits and poster session 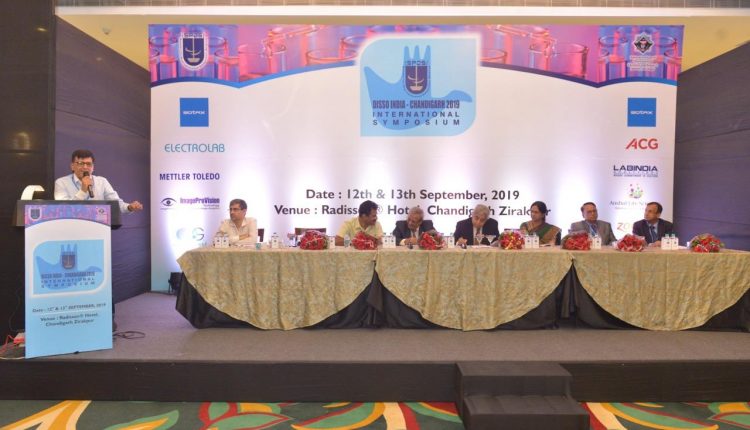 Society for Pharmaceutical Dissolution Science (SPDS) recently conducted its seventh annual international conference Disso India–Chandigarh 2019, jointly with the National Institute of Pharma Education and Research (NIPER), SAS Nagar. The event promoted the introduction of new technology and innovation, and deliberations on various issues related to dissolution testing and its applications.

Attended by more than 200 delegates from the industry and academia, the event comprised of plenary lectures, panel discussions, exhibits and poster sessions.

Beginning his address, Professor Akkinepally said, “We want the DCGI and MoHF&W to help us in our effort for establishing a Centre of Excellence (CoE) in dissolution studies at NIPER, jointly with SPDS.

Sharing an important aspect about SPDS, Kshirsagar informed that with its roots in India, SPDS has moved globally. “SPDS was born in India, and it has moved globally now which is indeed a matter of pride for us,” he said. Also, he requested the regulators to consider and include SPDS as an official source to suggest modifications needed time to time in pharmacopoeia and related guidelines.

Singh went back to the history of pharmaceutical research in India and told the audience how NIPER, SAS Nagar came to being the oldest institution among the seven NIPER(s) in the country. “When NIPER, SAS Nagar was founded, no major pharmaceutical research was taking place in India. It was late Dr Parvinder Singh, former Chairman, Ranbaxy, who made it his passion to make sure that NIPER was built in Chandigarh,” he told the audience.

Next, Dr Ramaswamy, in his address, notified, “SPDS began in 2012 and it has registered its local chapter in the USA recently with the help and initiative by Patrick Balmer who is heading Sotax operations in the USA, under the guidance of Dr Vinod P Shah, Pharma Consultant and Ex-US FDA.”

Thereafter, SPDS recognised the contributions of Professor Imre Klebovich, Head of Department of Pharmaceutics of the Faculty of Pharmacy at Semmelweis University Budapest, Hungary and honoured him with the Award for Excellence in Pharmaceutical Dissolution Science. His main research interests are bioanalytics, pharmacokinetics, metabolism, biopharmaceutics, bioequivalence, food-drug interactions and drug delivery. He has 25 patents, has published more than 250 papers in peer-reviewed journals, 10 books, 17 book chapters as well as co-editorial works in books and more than 460 lectures on Hungarian and international conferences.

Also, students presented their posters on various aspects of dissolution. The first and second prizes were bagged by Centre for Pharmaceutical Nanotechnology, Department of Pharmaceutics, NIPER, SAS Nagar for novel amphotericin B – lipid conjugate loaded enteric coated liposomes for improved gastric stability and oral bioavailability of amphotericin B and Department of Pharmaceutics, NIPER, SAS Nagar for application of physiologically-based pharmacokinetic (PBPK) modelling to understand the effect of particle size distribution (PSD) on biopharmaceutical performance of fenofibrate (FNT) nanosuspensions, respectively, while the third prize was bagged by Department of Pharmaceutical Sciences and Technology, Institute of Chemical Technology (Deemed University) for flow through dissolution of co-encapsulated anti-tubercular drug microparticles in biorelevant lung media.

Prior to the event day, a pre-conference workshop ‘Fundamentals of Dissolution Science’ of Disso India-Chandigarh 2019 was also organised at the NIPER campus, wherein the industry professionals shared their experiences and knowledge with the undergraduate and postgraduate students as well as PhD scholars.

Currently, SPDS is also in talks with Chinese delegation to organise Disso China in April 2020 and Disso USA in September 2020 with the US Chapter.

SPDS is the only association dealing with the subject of dissolution and the only Indian association to get registered in the USA. It has also published a reference Desk Book on Dissolution Science and its Applications which is useful for pharma scientists across the globe, pharmacy students and the analysts who are working in the area of dissolution testing.

Inspection of Unichem’s Kolhapur facility by USFDA completed without observations