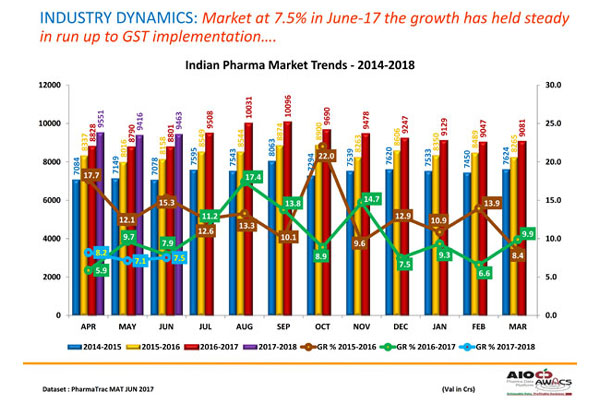 Steady growth in run up to GST roll out

Despite concerns that pharmaceutical sales would dip drastically in the run up to GST implementation, AIOCD AWACS data for June shows that the market held its own, growing a steady 7.5 per cent, and sales worth INR 9463 crores. Monthly growth has been pulled down by the volumes of the established products (as the retail trade destocked pre GST) but June quarter did see a minuscule volume growth of 2.6 per cent and price growth at 2.1 per cent which has been some recovery over last two quarters.

Therapy-wise growth was mixed, with anti-infectives posting a positive growth of 3.1 per cent, though dermatology, gastro intestinal and vitamins and mineral categories grew lower than 10 per cent on monthly basis. Major chronic therapy areas like anti-diabetics are driving a high double digit growth (18.3 per cent), the cardio segment posted double digit growth while CNS stuck to single digit growth.

Amongst the Top 10 corporates, Zydus clocked the highest growth at 19.4 per cent followed by Lupin at 16.4 per cent and Macleods at 12.5 per cent. An interesting aside is that inspite of these challenging times, 43 companies were launched in the last 36 months, four of which crossed Rs 10 crores in revenues. Among brands, Mixtard leads the pack with Rs 43 crores, followed by Glycomet GP at Rs 37 crores, Spasmoproxyvon Plus at Rs 42 crores, Lantus at Rs 33 crores, and Galvus Met at Rs 40 crores and Liv 52 Rs 26 crores and Janumet at Rs 32 crores in June.

Piramal to expand pharma presence in US, Europe and Japan