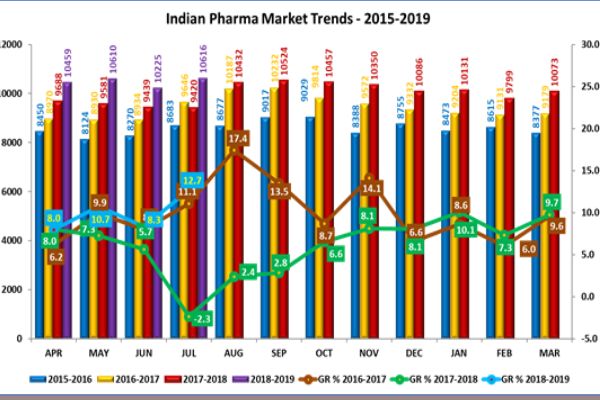 In July, growth due to price was a positive contributor, unlike previous months, when price growth was a negative factor

Pharma market grew by 12.7 per cent in the previous month compared to negative 2.4 per cent growth in July’17. This essentially has been the journey of one year after GST roll-out. This is the highest growth rate during the last twelve months. Market has gradually recovered during this period, and this trend may continue in the coming months.

Another positive thing from the market perspective being the price growth. In July, growth due to price was a positive contributor, unlike previous months, when price growth was a negative factor. In May and June’18, price growth was -1,0 per cent and -0.8 per cent respectively, while in July it was 5.2 per cent

NLEM, Non-NLEM, Non-Scheduled Para 19 Market
The NLEM 2013 containing molecules market showed growth at 5 per cent whereas the non NLEM market grew at 13.6 per cent resulting in an overall growth 12.7 per cent