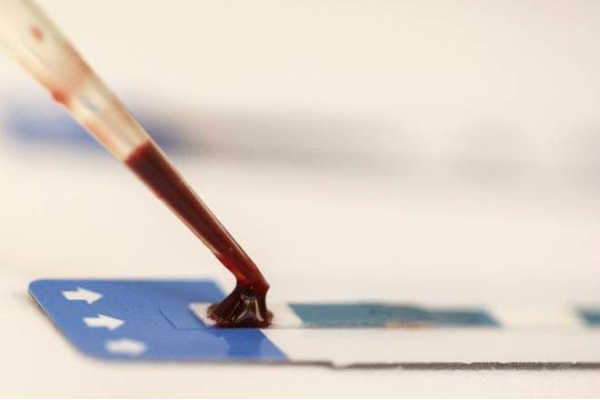 Scientists have found a new blood test that can accurately predict the development of tuberculosis (TB) up to two years before its onset in high-risk patients. Those living with someone with active TB are at highest risk for developing the disease, yet only about 5-20 per cent of people infected with tuberculosis actually develop TB, according to a study published in the American Journal of Respiratory and Critical Care Medicine.

The researchers developed and validated a blood test that measures the expression levels of four genes that can more accurately predict the development of TB in high-risk patients.

“We found that this prediction (up to two years before the onset of the disease) is possible through measurements of a combination of a four-gene signature in the blood,” said Gerhard Walzl from Stellenbosch University in South Africa. This signature, known as ‘RISK4,’ is a combination of four genes associated with inflammatory responses.

“The individual components of this signature may not be sufficient to deliver an accurate diagnosis of prediction, but a combination of these markers improves its accuracy,” said Walzl. Focusing on people who lived with someone with active TB, the researchers enrolled 4,466 HIV-negative participants and took their blood samples.

“We are hoping that primary health clinics will be able to use such a test and the reagents would then be readily available in that format, similar to the tests that are currently used to diagnose TB,” Walzl said.

Tuberculosis, caused by infection with Myobacterium tuberculosis (M.tb), is the world’s leading cause of death brought on by a single pathogen. More than 10 million new cases of TB are diagnosed each year, and almost two million people die from the disease. Globally, 1.7 billion people are estimated to be infected with M.tb, according to the study.

CSIR and AIM sign a LoI to foster innovation

Zydus Cadila get US FDA approval for Atazanavir capsules