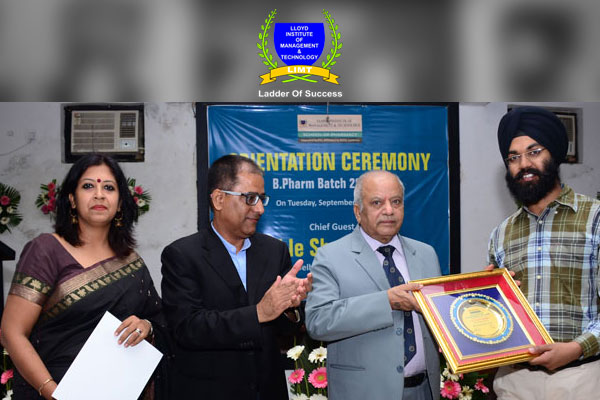 The ceremony was held under the mentorship of SL Nasa, Registrar, Delhi Pharmacy Council

The programme started with Nasa addressing the students, where he apprised the students about his ongoing efforts in creating new openings for pharma graduates in fields like pharma industries, blood banks, Mohalla clinics, visiting pharmacists in inpatient departments, government healthcare centres and persuading the government to reserve quality assurance and whole sale trade of drugs exclusively for pharmacy graduates.

During his speech, he elaborated on Pharmacist Day Celebration which is celebrated on September 25 every year. He also informed about the awards to be given on Pharmacist Day to professionals working in hospital pharmacy, community pharmacy, teaching profession, research pharmacy, regulatory pharmacy, industry pharmacy, best performance state pharmacy council and any other categories decided by Pharmacy Council of India (PCI) from time to time.

Deepanmol Singh was honoured for best teaching performance in session 2016-17.

The event further followed by the Lab Coat Ceremony in which Nasa honoured two students of first year namely Sushmita and Ritik Raj with lab coats. Nasa inaugurated Community Pharmacy Division and appreciated the efforts of college for awareness camps of dengue, malaria, chicken guinea, swine flu at rural areas and hand hygiene camp at few schools under the guidance of Savita Bhati. A blood donation camp was organised by Community Pharmacy Division in association with Rotary Club. Staff and students actively participated and a total 104 units of blood were collected.