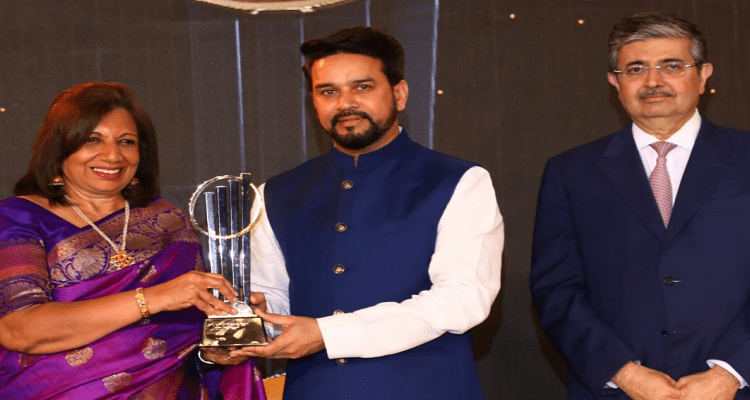 EY Entrepreneur of the Year (EOY) India Award recognises entrepreneurs, who, with their disruptive ideas and passion to excel, are creating successful enterprises and emerging as ‘Builders of a better India.’ The award honours those who have contributed significantly towards nation building with their entrepreneurial ingenuity and visionary ideas.

In their felicitation, EY said Kiran Mazumdar Shaw is “synonymous with the Indian biotech industry”, and has been at the forefront of innovation through her strong investments in research.

On receiving the Award, Mazumdar-Shaw said, “I am honoured to receive the EY Entrepreneur of the Year Award. Entrepreneurship is one of the most economically empowering pursuits, which allows you to follow your own path to solving some of society’s toughest challenges, driving sustainable inclusive growth and ultimately creating a better world. As an entrepreneur, I have been committed to building a differentiated humanitarian business that provides affordable access to life-saving medicines globally. I would like to appreciate the significant role played by EY in supporting entrepreneurship in both emerging and developed economies, aiding new business models to scale up overcoming their biggest barriers to growth.”

Mazumdar-Shaw, who was among the 17 finalists for the EOY 2019 award, was felicitated at a grand awards gala, amidst a gathering of over 500 of India’s leading entrepreneurs, business icons, investors and government leaders, in New Delhi.

Minister of Railways and Commerce & Industry Piyush Goyal and Anurag Thakur, Minister of State for Finance and Corporate Affairs, were the Chief Guest and Guest of Honour, respectively at the Awards Banquet.

Over the last two decades, the EOY India programme has honoured over 180 entrepreneurs across several categories. This year marks the 21st year of this programme.

Every year, an independent jury comprising some of India’s most eminent business leaders select the finalists and winners. An eight-member jury panel, headed by Uday Kotak, Managing Director and CEO, Kotak Mahindra Bank, came together to select the best of finalists for the EOY India 2019 Awards programme.

The India winner will join winners from different countries in June 2020 in Monte Carlo, where one entrepreneur will be announced as World Entrepreneur of The Year. As one of the world’s most prestigious business awards programme for entrepreneurs, EOY Award recognises business leaders who are excelling in areas like innovation, financial performance and personal commitment to their businesses and communities. The programme is conducted in 145 cities in 60 countries.