International Arogya 2017 to be held in Delhi 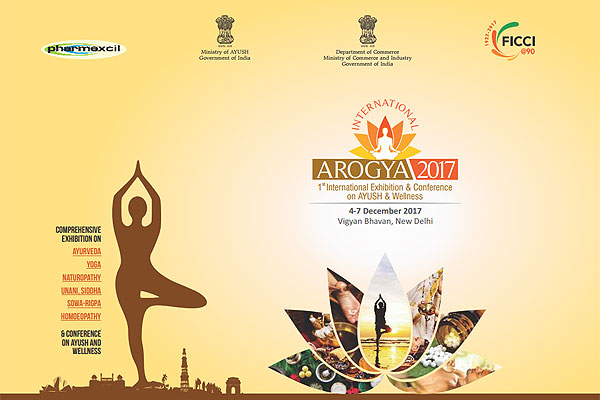 Jointly organised by Government of India, FICCI and Pharmexcil, the event, from December 4-7, 2017, will have exhibitions and conferences

The first international conference and exhibition on AYUSH and wellness systems, International Arogya 2017, will be held in Delhi from December 4-7, 2017. The event will be organised by FICCI in collaboration with Government of India’s Ministry of AYUSH and Ministry of Commerce & Industry, and Pharmexcil.

The four-day event will showcase the strength and scientific validation of traditional Indian systems of medicine in the global context, including Ayurveda, Yoga and Naturopathy, Unani, Siddha, Sowa-Rigpa and Homoeopathy (AYUSH), and facilitate their worldwide promotion, development and recognition.

Delegates from India and abroad, as well as over 200 hosted delegates from more than 60 countries – including importers, regulators and government officials — will attend the show. More than 250 manufacturers of alternative medicine will showcase their products and services. The mega event will bring key stakeholders of AYUSH sector under one roof, to help boost exports of AYUSH products, and showcase latest research and developments in alternative medicine systems of India.

A major highlight of International Arogya 2017 will be Indian CEOs round table, chaired by Naik. The event will also host sessions built around themes like: Enhancing the export potential of AYUSH; Business opportunities in integrative healthcare; Building a brand strategy; Standardisation and quality control in AYUSH sector; and a workshop on essential herbal raw materials required in AYUSH Industry.

A FICCI and Frost & Sullivan Knowledge Paper titled ‘AYUSH for the World: Market Access Handbook’ will be released. International regulators from ASEAN and BIMSTEC countries, Canada and Switzerland will meet Indian regulators and industry leaders. There will also be a meet of medicinal plant cultivators. Visitors will be offered free health check-ups and consultation, lectures and counselling by specialists of Ayurveda, Yoga & Naturopathy, Unani, Siddha, Homoeopathy, Prakriti Pariksha and Nadi Pariksha.

DRL gets approval for Impoyz Cream