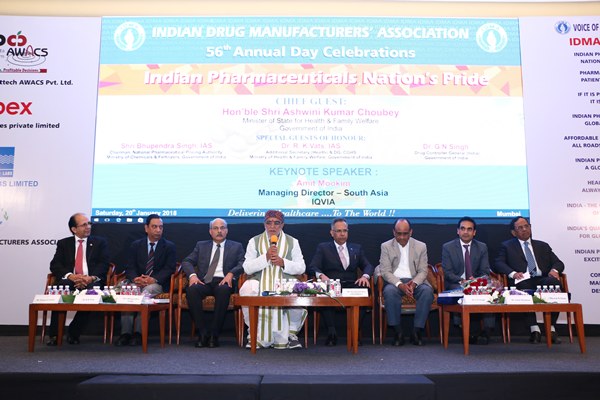 The Indian Drug Manufactures’ Association (IDMA) recently celebrated its 56th Annual Day in Mumbai. It was attended by representatives from the Central government and state regulators as well as pharma companies.

Daara Patel, Secretary General, IDMA welcomed the delegates to the event. He also touched upon and highlighted the issues faced by the industry in his Welcome Address. Ashwini Kumar Choubey, Minister of State for Health & Family Welfare appreciated the Indian pharma industry for their contribution towards improving the Indian healthcare system. He praised them and said that doctors in India are considered equal to god but without you (the pharma industry) doctors won’t be able to cure ailments. He also informed the audience about the improvements in the business environment of Uttar Pradesh (UP), Bihar and Jharkhand and asked the industry to consider investing in these states.

Dr GN Singh, DCG(I) said that most of our labs across India are working with start-ups and inventing good products, however we need to strengthen the regulatory set-up. Foreseeing the future, he said that the government is thinking about how to get innovations? He also stressed that globally Indian pharma companies are expanding its horizons, however we need to fortify our current capabilities and competencies rather than entering into other areas.

He asked the industry to withdraw FDC products voluntarily as they are not good for patients. Talking about bio-availability and bio-equivalence (BA/ BE) studies, he said that we want to have assured medicines for our country’s patients. He asked the industry to come forward and show us which BA/ BE studies need to be carried out first. He further said that the government believes patients should know the quality of medicines they are consuming.

We all have to be pro-patients and all the medicines we are producing should adhere to all quality levels. He signed off by saying that the regulatory system in India is changing and moving towards self regulation.

Drawing comparisons between the Indian pharma industry with the IT industry, Bhupinder Singh said that like the IT industry, we too need to move up the value ladder in pharma. In India, the IT boom occurred with BPOs and now we see a lot of start-ups coming in IT, this is because they have moved up the ladder from servicing to creating innovation.

Dr RK Vats, Additional Secretary (Health) & DG, CGHS also stressed on self regulation and said that pharma companies should be best at checking their own products’ quality even before the regulators do it. Deepnath Roy Chowdhury, National President, IDMA addressed the august gathering and informed them about the key activities initiated by the association. In his speech, he said that the Indian pharma industry, over the last few years, has come to be recognised as the proud torch bearer of India’s abilities in providing quality affordable medicines. He said, “To emphasise that our mass production of quality and safe, affordable generic medicines have brought glory to the nation by contributing immensely to alleviate the national and global disease burden, we continue with our theme of ‘Indian Pharmaceuticals Nation’s Pride’ this year.” Stressing on the need for indigenous APIs, he said that due to collective efforts in interactive meetings and effective recommendations to the government they have formulated seven recommendations for APIs and the idea is not to create hurdles to Chinese APIs but to give filing to Indian API manufacturers.

He welcomed DCGI’s initiative of notifying licenses in perpetuity with only renewal fees to be paid every five years. Over 2500 SLAA FDCs approved by Kokate Committee have been cleared by DCGI till date for all manufacturers by submitting the modified Form 44. FSSAI has extended implementation date of nutraceuticals’ regulations by six months to July 1, 2018 thus allowing the industry to continue with products that have ingredients not yet approved/ unapproved.

Amit Mookim, MD, South Asia, IQVIA delivered the keynote. He cautiously informed the industry and said that Indian companies who are servicing the US market need to widen their portfolio because a single portfolio has limited business opportunities. He stressed on business opportunities that exist in the emerging markets as it is going to be $211 billion market by 2022 which is growing by five per cent and Indian players have significant headroom for growth.