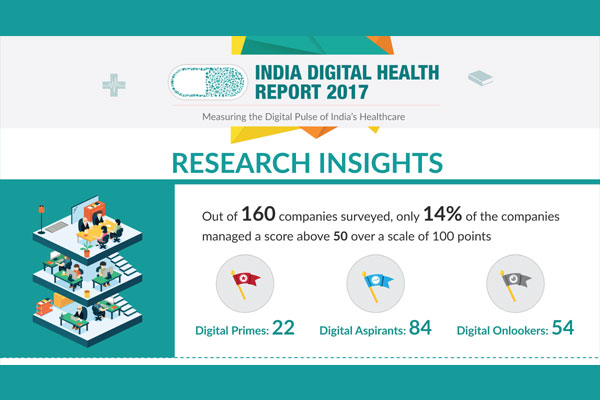 The ‘India Digital Health Report 2017’ by D Yellow Elephant, revealed that more than half of the pharmaceutical and healthcare companies in India – multi-national and domestic – have a placeholder presence on digital platforms, and are failing to actively engage with their stakeholders

Based on presence, engagement, response, and consumer followership, companies are segregated into three categories – Digital Primes (the torch-bearers), Aspirants (gradually moving up on the digital curve) and Onlookers (silent observers).

Of the four industry verticals, pharma accounts for the highest number of digital primes (22 per cent). Medical devices and equipment and diagnostics have maximum digital aspirants, with 71 per cent of the surveyed companies maintaining digital presence but lagging in engagement.

Apollo Diagnostics takes the overall top spot with a score of 70, followed by GE Healthcare with 65.5 and Pfizer with 65 points. Amongst hospitals, Kokilaben Dhirubhai Ambani Hospital leads with 56 points.

Aman Gupta, MD, D Yellow Elephant, said, “The report indicates that pharma and healthcare companies in India are affected by ‘engagement draught’ – present across most social media platforms but reluctant to engage with stakeholders. With Health Care Professionals HCPs, patients, caregivers and policymakers consuming bulk of information online, it is imperative for companies to develop a digital ecosystem spread across multiple channels.”

“Launched in 2015, the India Digital Health Report has set benchmarks for digital presence across the sector. The second edition reveals that the digital journey for most companies has started, but restricted to presence. A robust digital engagement strategy should be integral to the corporate strategy, rather than an afterthought,” he added.

LinkedIn enjoys the maximum presence with 91 per cent players having a dedicated page, but only 11 per cent companies actively engaging on the platform. Facebook is the second most preferred platform with 90 per cent presence rate, followed by Twitter and YouTube.

Chandni Dalal, Lead, Digital Strategy, D Yellow Elephant said, “Out of the 160 companies surveyed, only 22 companies managed a score above 50 over a scale of 100 points. There is a trend of initiating and abandoning the platform midway, or selectively utilising the medium, as and when the need arises. Patients now arrive in physicians’ offices armed with information, and their insistence on taking a more active role in their treatment is transforming healthcare from a provider dominated marketplace to a consumer-centred system. More education is needed at every level, and healthcare firms have a huge role to play in listening and informing both physicians and those they treat.”

The long-term aim of this report is to outline the digital integration required at all steps of a patient’s journey, from searching for symptomatic information, HCP interaction, diagnosis, treatment and follow ups.

CARB-X to fund scientists for new antibiotics to treat superbugs

Conference on integrative Ayurveda and Allopathy to be held in Kochi