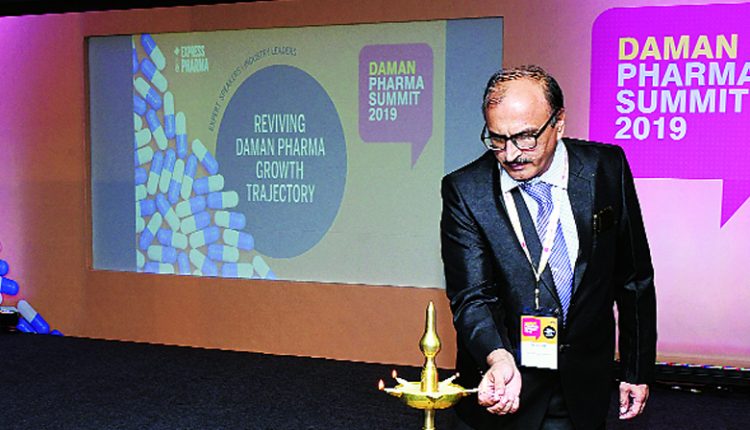 Under the theme ‘Reinvigorating Daman Pharma Inc,’ Express Pharma organised a thought leadership summit in Daman in November. The summit witnessed experts from the industry discuss the advantages that the pharma industry enjoys in the region, the operational and regulatory challenges it faces and the need for infrastructure up-gradation in the region

The competition in the generic medicines market is touted to become fiercer. According to ICRA, the generics medicine sector is set to grow at 11-13 per cent in FY2020. However, in the face of ever-evolving factors challenges like regulatory reforms, pricing pressures, etc, the industry will have to gear up for a tough road ahead. Under such circumstances, it becomes imperative for the Indian Pharma Inc to examine its existing avenues to remain relevant in the competition. Daman, with nascent infrastructure, is one such avenue with potential that remains untapped. Many major domestic pharma companies have already stationed their export-oriented manufacturing units which are meeting global regulatory requirements. Though the leisure period of tax incentives is over, companies have still opted to continue their operations in the region. Yet, the fact remains that the tiny Union Territory situated on the western coast of India still has a lot of transformation to go under before it can significantly boost the Indian Pharma Inc’s growth. 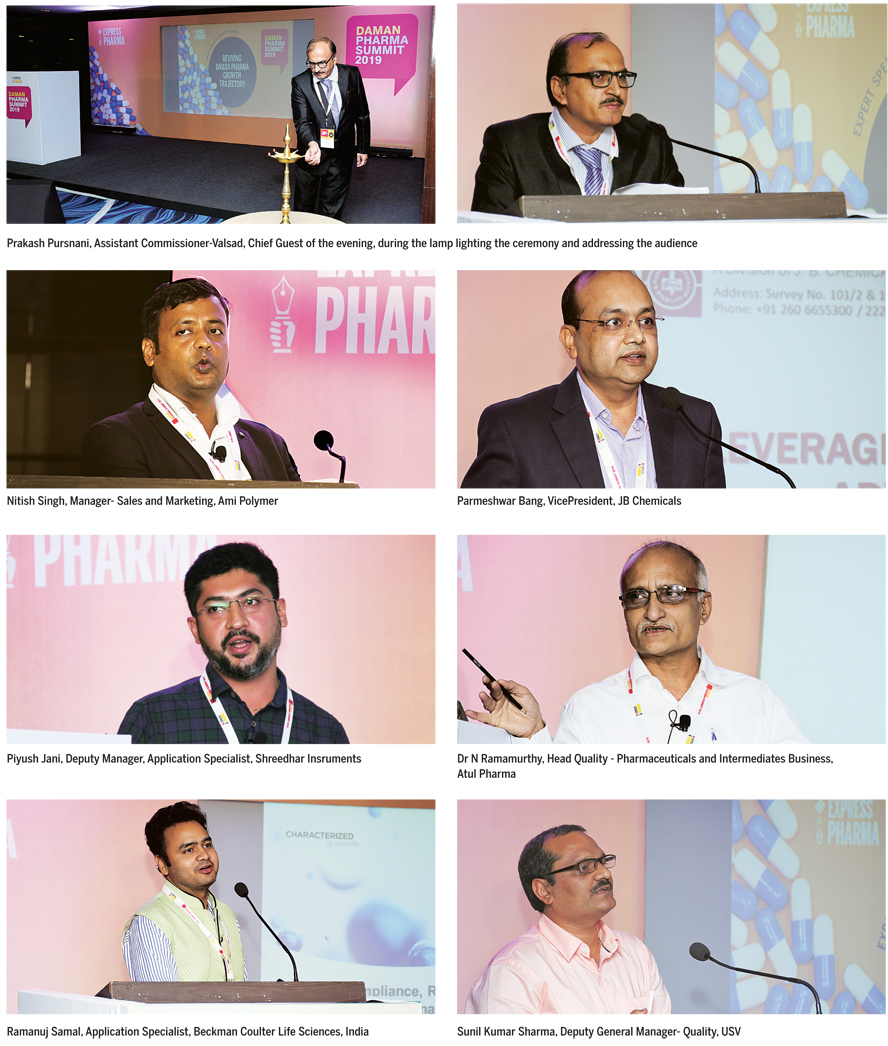 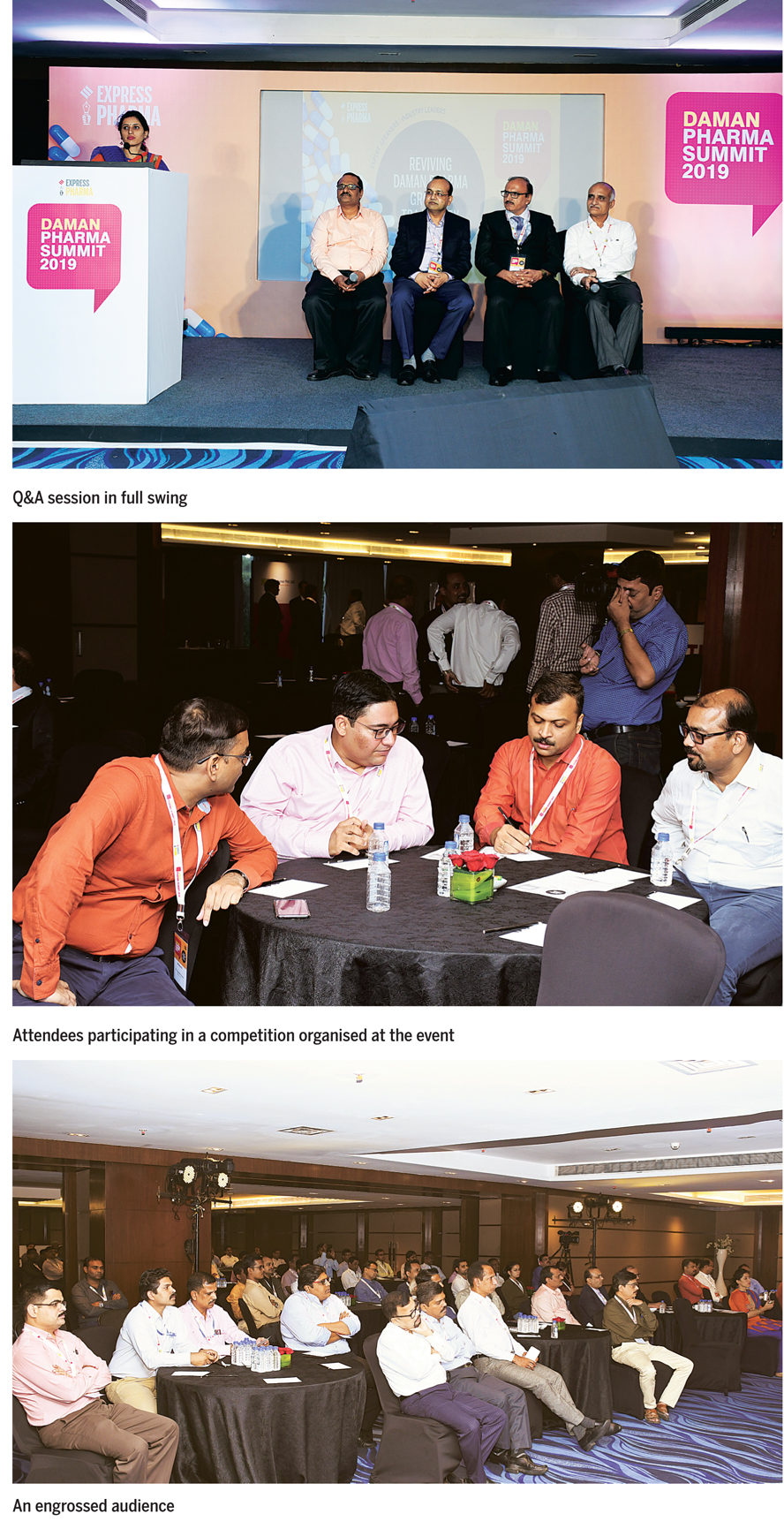 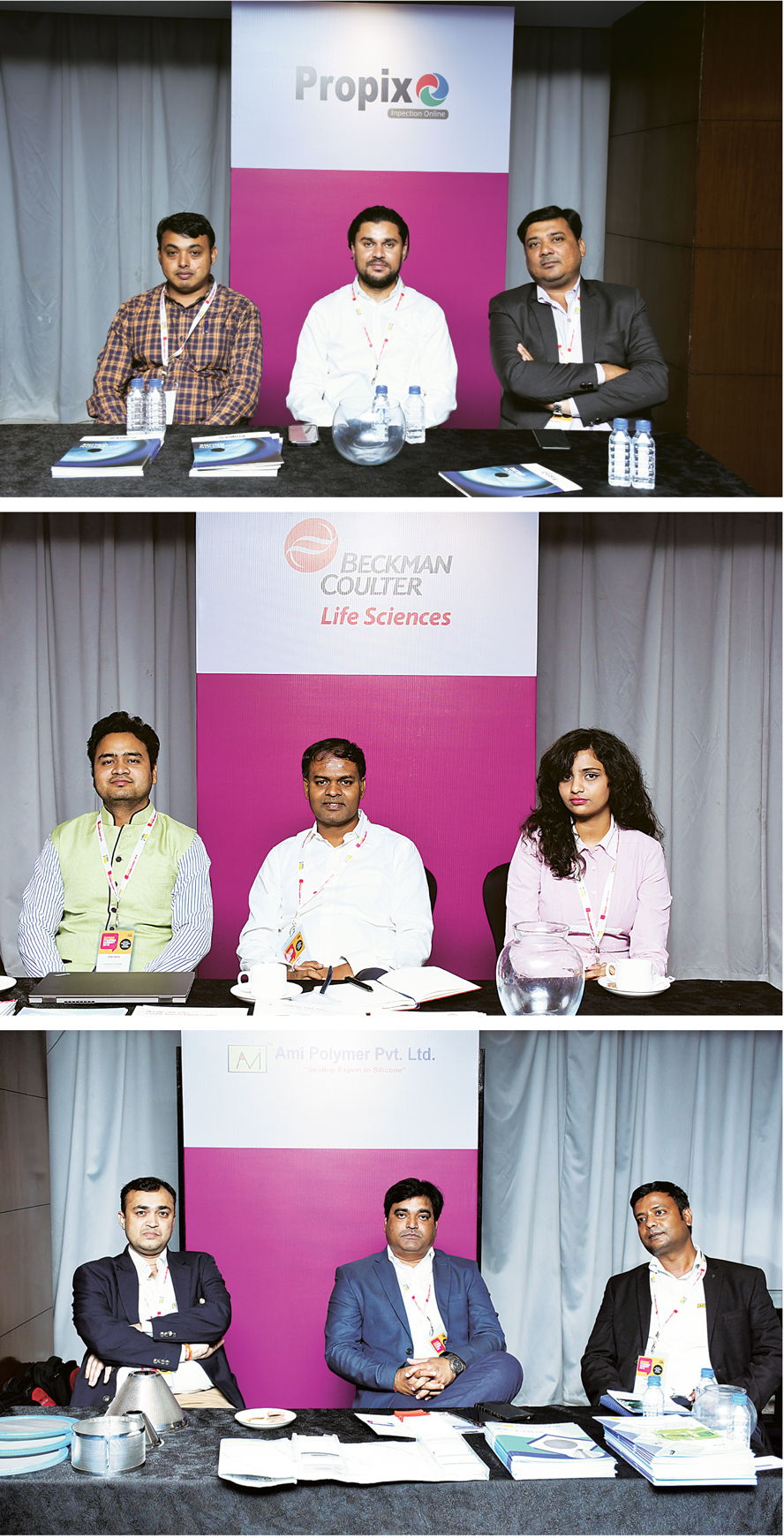 On this line of thought, Express Pharma organised its maiden knowledge summit in Daman on November 15, 2019, at The Deltin, Daman. Under the theme ‘Reinvigorating Daman Pharma Inc’, Daman Pharma Summit witnessed experts from the industry discuss the advantages that the pharma industry enjoys in the region, the operational or regulatory challenges it faces and the need for infrastructure up-gradation in the area.

After a welcome note by Express Pharma, the event was started on an auspicious note by a lamp lighting ceremony performed by the Chief Guest of the evening, Prakash Pursnani, Assistant Commissioner – Valsad. While addressing the audience later, he spoke about the government’s commitment to help the industry keep up with the stringent global regulatory procedures. “Our department is continuously improving our strength, and the strength of our officers, by conducting various training sessions to sharpen their knowledge and make them more efficient.”

The Chief Guest’s address was followed by a talk on ‘Leveraging India advantage- Advantage Daman’ by Parmeshwar Bang, Vice President, JB Chemicals. Acknowledging that since the past 25 years, the domestic pharma regulation and CGMP regulation have evolved exponentially, Bang noted that Indian regulatory system is now almost at par with the global pharma standards. “Our regulations and regulatory framework have evolved significantly in the last few years. We now have a better understanding of the regulatory procedures in other countries as well, boosting compliance,” he stated.

Talking about the evolution of the Indian Pharma Inc over the past few decades, he said, “India has an established domestic pharma industry with a network of 3000 drug companies and over 3500 manufacturing units. Clearly, we have a very large manufacturing base and it is only going to increase in the future. Out of the 3500 manufacturing units, 1400 are World Health Organisation (WHO) GMP certified or approved, 1,105 units have an European Certificate of Suitability CEP approved, more than 950 units comply with TGA guidelines and about 584 manufacturing units are approved by the US Food and Drug Administration (US FDA), making India the country with the largest number of units approved by the US FDA outside the US. We also have world-class machinery and equipment suppliers which are significantly more cost-effective than those in other countries.”

He noted that in 2018, Indian pharma companies received 290 ANDA approvals from US FDA which contributes to 35 per cent of the total ANDA approvals by the US FDA. “These achievements are no mean feat. This qualifies India as a global supplier,” he believes. He talked further about various other factors that give India an operational advantage and said, “We have R&D centres set up by various companies and those funded by the government specialising in process development and development of cost-effective technology.” Maintaining that India’s diverse topographical and climatic variations have proved it to be an excellent clinical trial centre, he informed that various global companies are now outsourcing clinical trial research work to Indian companies.

“Multiple factors contribute to Daman’s potential as an upcoming pharma hub,” Bang said as he talked about the advantage that Daman possesses for the industry at large. However, he pointed out that indeed, the region may not have grown as desired and expected over the past 25 years, “In the 1988 budget, when VP Singh was the Finance Minister, Daman was qualified as a backward area and a lot of benefits in terms of taxes were given to industries to set base here. But this region came in limelight only after 1995 and saw a surge in industrial setup which peaked in mid-2000s. However, expansion has slowed down since then,” he said.

Maintaining that Daman still has a lot to offer to the industry at large, Bang pointed out the unique advantages that the Union Territory has to offer, “All regulatory agencies including the FDA are based in near vicinity. Also, being surrounded by a pharma hub like Gujarat gives Daman a definitive edge. Availability of technically sound and skilled manpower is a plus for a knowledge-based industry like pharma.” He further added, “Another important advantage that Daman has is that power and energy costs here are lower compared to the neighbouring states.

Since pharma manufacturing and operations consume a lot of energy, this is indeed a huge advantage. Transportation is another plus — the region is very well connected by road, railway, air and sea. The nearest airport is Surat, 120 kms away and Mumbai is at a distance of 180 kms. This is a huge advantage as both Mumbai and Ahmedabad are OEMs hubs. Also, one of the largest ports in India, Jawaharlal Nehru Port Trust, (JNPT) is loacted nearby.”

The pharma industry in Daman, as previously mentioned, has hit certain roadblocks over the last few years. Lack of water supply is one important issue that the industry demands the government to address. Bang said, “The government needs to establish a permanent and well functioning setup for the supply of clean, potable water to the industries. The companies have to manage their water requirements on their own.”

Bang also spoke about how better coordination between the industry and government agencies can check any environmental damage that drug manufacturing may cause in Daman. He said, “The government can establish a common effluent treatment plant to curb pollution. This will help the industry comply with the regulations better. Moreover, the Daman administration can also consider setting-up a separate Pharma Industrial Zone with all the basic industrial requirements like continuous power supply, water supply, effluent treatment, competitive land rates, etc.”

He ended his talk by asking the authorities to reconsider providing tax incentives to boost the pharma industry in Daman. It will benefit the existing industries and attract new investments.
Next to take the stage was Piyush Jani, Deputy Manager, Application Specialist – Shreedhar Instruments, who gave a presentation on ‘Environmental Monitoring and Particle Characterisation of Pharmaceutical Formulations.’ His presentation was followed by Nitish Singh, Manager- Sales and Marketing – Ami Polymer who spoke on ‘Polymer Solution for Pharma Industry.’

Later, Dr N Ramamurthy, Head Quality – Pharmaceuticals and Intermediates Business, Atul Pharma, spoke about the need for infrastructure up-gradation to boost productivity. He informed the audience about the need for infrastructure development which basically lies in three spheres, namely, human resource, machinery used and the materials that are used in the processes. He added, “Our people are well educated, have ample experience, but lack in training and advanced skill development. This affects our overall effectiveness. Reskilling is a must if we want to have any sort of infrastructure up-gradation.”

Continuing, he said, “Secondly, we devote a lot of time in collecting all sorts of data. But who do we collect this data for? What use is it for us if we do not analyse it? Pharma companies collect a giant pool of data and we need to start analysing it efficiently.”

Ramamurthy proudly stated that Indian Pharma Inc is definitely well equipped with the latest technologies. “In fact, we are world leaders in exporting pharma equipment. Although we do lag in terms of automation compared to other countries,” he argued.

Further, expressing his concern about the quality of materials that are used by the industry, he said, “We need to be careful about quality standards at every stage of production and not just during the final stage. We should remember at every stage of the drug-making process, that we are creating a product that will save millions of lives. These thoughts need to be in our minds at all times.”

He advised that companies should be proactive with their quality compliance so that audit visits do not cause any unnecessary disruption or stress. “We should set our own quality standards in a way that audits become a hassle-free process,” he said.

Ramamurthy also talked about the initiatives the government has undertaken to boost infrastructure. He informed that the government will provide a one-time grant to the established common facilities in any bulk drug park promoted by the state governments or state corporations to provide financial assistance. The maximum limit to the grant aid would be $14.64 million per bulk drug park and $2.93 million per cluster for Common Facility Centres.
Talking about the Cluster Development Program for the pharma xector, he says, “The total size of the scheme is proposed to be at $2.93 million for 2018-20. It will be implemented in a public-private partnership format.” He also talked about the Pharmaceutical Promotion and Development Scheme started by the government to promote exports in the pharma industry.
Next up, Ramanuj Samal, Application Specialist – Beckman Coulter Life Sciences, India, gave a presentation on ‘Improve compliance, reduce workload and costs with Anatel online TOC analysis of pharmaceutical waters’. Afterwards, talking about the regulatory challenges that the pharma industry faces in general, Sunil Kumar Sharma, Deputy General Manager- Quality, USV said, “Daman has almost 500 small and big pharma industries operating currently. Majorly, the challenges that these industries face are regulatory compliance, especially when it comes to the US FDA. While we try to keep up with the regulations, warning letters are quite common during inspections. Not just in Daman, but all over India, receiving 483s and warning letters has become very commonplace.”

He further added, “It becomes very important to be careful with investigation processes, development processes and data integrity. We may also need to check our attitudes and become more proactive about regulatory requirements. The sab kuchh chalta hai attitute will have to go.”

Towards the end of the event, a Q&A session was held with Pursnani, Bang, Ramamurthy and Sharma on the expert panel. One of the major take-aways from the session was that the Indian pharma industry should step up and take the onus of quality compliance on itself, rendering the need for any regulatory authority to criticise its operations. “Our regulations and our industry need to become that proactive that our quality standards set global precedents. One India, One CDSCO, One Certificate. India is on the path to become the world leader in pharmaceutics. The industry and the regulators need to work together seamlessly to achieve this feat as soon as possible,” said Ramamurthy as the event concluded.