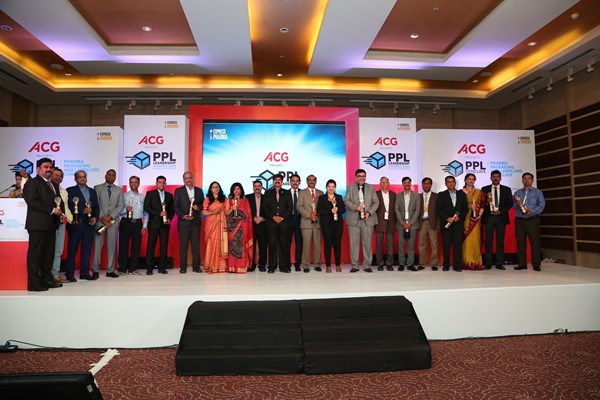 Express Pharma, the leading industry publication from The Indian Express Group, recently hosted the first ever PPL Leadership Awards. It acknowledged and honoured pharma packaging professionals who have been the innovators and game changers in the life sciences sector with their significant contributions. ACG was the Presenting Partner for the awards.

Held concurrently with the first edition of Pharma Packaging and Labelling (PPL) Conclave, on March 15, 2018, at Novotel Airport, Hyderabad, the awards night began with an address by Viveka Roychowdhury, Editor, Express Pharma, who welcomed the delegates and explained the rationale behind the initiative. She explained that the awards were a recognition of the winners’ individual contribution to the pharma packaging industry, thereby making it one-of-its-kind.

Next, Madan Mohan Reddy, Chairman, Pharmexcil & Wholetime Director, Aurobindo Pharma, who was also the Chief Guest on this occasion, addressed the audience. He lauded Express Pharma for launching this initiative. He also highlighted the various challenges faced by the Indian pharma industry and emphasised on the need of strong collaborations in the industry to overcome them. He also spoke on spurring innovation across various segments of the pharma industry and creating a very conducive eco-system for growth.

The next speaker, Chakravarthi AVPS, Ambassador, World Packaging Organisation, and Chairperson of PPL Conclave’s Advisory Board, explained and elaborated on the methodology of the PPL Leadership Awards and the process of choosing the deserving winners. He also assured that this platform is set to become bigger in the following years to ensure that pharma packaging professionals receive their due respect and acknowledgment for their contributions to the life sciences industry.

17 leading professionals received the PPL Leadership Award for Outstanding Achievement in Pharma Packaging. The winners of this category (in alphabetical order) are as follows:

Two emerging leaders were also recognised at PPL Awards. The winners of the ‘Rising Stars in Pharma Packaging’ category were:

The three doyens were:

The citations acknowledged them as pioneers and leading lights of the pharma packaging services industry and recognised that have been instrumental in introducing several technological advances, thereby accelerating the progress of the life sciences sector. Today, their organisations are global players of great repute.

The Advisory Members of PPL Conclave and Awards were also felicitated for their invaluable insights and constant guidance in making the inaugural PPL conclave a successful endeavour.

The winners were exultant and elated at receiving the awards. The evening ended with a gala dinner which gave the delegates to interact and network with their peers in the industry.