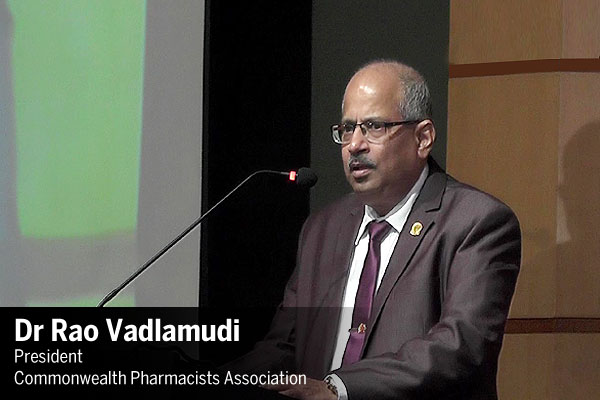 He is the second Indian professional to hold this post

The first CPA President from India was late Dr J.N. Banerjee during the period 1982 – 1987. The CPA is an organisation of Commonwealth professional pharma bodies and individual members with an objective to empowering pharmacists to improve health and well-being throughout the Commonwealth there by adding quality to the range of services offered by the pharmacists with head quarter based at UK.

Dr Rao Vadlamudi has been President of IPA, the national body of pharmaceutical professionals in India for the period 2014 – 18. During this period, he led the Association in organising successful international and national events including the 61st International Pharmaceutical Students’ Federation (IPSF) World Congress in 2015. During this period, he also initiated advocacy exercises with the Indian government, pushing forth policy inputs and documents, furthering the cause of pharmacists and pharmacy profession in the country. Under his tutelage, in December 2016, IPA went on to organise the Indian Pharmaceutical Congress (IPC) that witnessed participation of over 10,000 national and international delegates from various facets of the profession. He has also partnered with organisations like FIP, FAPA and WHPA to tackle major health care issues including tackling Antimicrobial Resistance and Campaign against Drug Counterfeiting globally. An academician and a scientist, Dr Rao Vadlamudi has also led cutting – edge drug discovery programmes in companies like Hoechst India (Sanofi) and Nektar Therapeutics India.

CphI India to host workshop on ‘Response to 483s’ in Mumbai