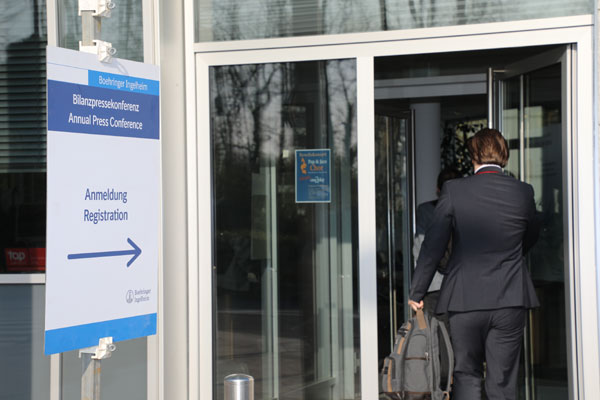 Company posts 2017 results, 65 journalists from across the globe take part in the conference

Boehringer Ingelheim (BI) recently posted the results of 2017 financial year, during the recently held Annual Press Conference in Ingelheim attended by over 65 journalists across the globe. The press conference was addressed by Michael Schmelmer, Member of the Board of Managing Directors responsible for Finance, Hubertus von Baumbach, Chairman of the Board of MD and Philipp Baum, Corporate Senior VP Communications, BI.

They informed that all the company’s businesses contributed to net sales growth. R&D expenditure exceeded three billion euros, around €2.7 billion of which was in the human pharma area alone. Last year, BI generated net sales of nearly €18.1 billion, representing an increase of 15.7 per cent in currency-adjusted terms (+13.9 per cent in euro terms). Adjusted for all the one-off effects that have resulted from the business swap with Sanofi, the company recorded currency-adjusted net sales growth of 6.1 per cent (+4.4 per cent in euro terms). With operating income of around €3.5 billion, the return on net sales came to 19.3 per cent. The company employed an average of approximately 50,000 people worldwide in 2017.

In the human pharma business, BI last year succeeded in generating net sales of more than $1 billion each with six medicines. There were the respiratory medicine SPIRIVA, the anticoagulant PRADAXA, the diabetes medicines TRAJENTA & JARDIANCE, OFEV, which is used to treat the rare disease idiopathic pulmonary fibrosis (IPF), and MICARDIS medicines used for the treatment of hypertension. Overall, net sales from human pharmaceuticals grew by 6.9 per cent in currency-adjusted terms to more than €12.6 billion (+5.0 per cent in euro terms). The company accomplished the transfer of 13 new active ingredients to clinical studies as first-in-man applications.

The two parasiticides generated the largest share of net sales: NEXGARD is the best-selling product at €546 million, followed by FRONTLINE at €381 million. Net sales for the swine vaccine INGELVAC CIRCOFLEX came to around €300 million. Overall, BI generated around 22 per cent of its total net sales in the animal health business. The biopharma contract manufacturing business grew by 10.7 per cent in currency-adjusted terms last year to €678 million and contributed four per cent to total net sales.

BI recently established the BI X digital laboratory and increased the BI Venture Fund from €100 to 250 million, €50 million of which is intended for digital innovation alone.

This was followed by a R&D press conference ‘Transcending Disease Boundaries,’ which was addressed by Dr Michel Pairet, Member of the Board of Managing Directors, responsible for BI’s Innovation Unit and Dr Christopher Corsico, Chief Medical Officer, BI. It is committing more than €20 billion to Research & Development for human pharma by 2025. To support and complement its own R&D, BI is increasing the emphasis on external collaborations and expanding the community of innovation partners. The company currently works with over 70 innovative partners in universities, scientific institutions and biotech companies.

In immunology, BI’s IL-36 receptor inhibitor has the potential to transform the standard-of-care for patients with immune-mediated diseases. BI 655130, a new biological entity and first-in-class IL-36 receptor antibody, has shown strong efficacy in early clinical testing with a single dose in patients affected by Generalised Pustular Psoriasis. These results support a broad potential in multiple inflammatory diseases.

BI is exploring therapies that target tumour cells directly in pathways so far ‘undrugged’. In immune oncology, the research teams are ‘turning up the heat on cancer’ with therapies that activate the abilities of the patient’s own immune system and by bringing together smart and highly promising combinations of both types of therapies. The company has expanded its PDE9 inhibition research programs to the prevention of relapse in schizophrenia and also in the prevention of first episode psychosis.

Based on the pathophysiological and mechanistic parallels of fibrotic diseases, BI is investigating its compound nintedanib in a wide spectrum of fibrosing Interstitial Lung Diseases (ILDs). Two Phase III clinical trials are exploring the efficacy and safety of nintedanib (OFEV) in Systemic Sclerosis ILD (SSc-ILD) and Progressive Fibrosing ILD (PF-ILD). In cardiometabolic diseases, BI is building on the strength of the results of the EMPA-REG OUTCOME trial to explore the potential benefits of empagliflozin (JARDIANCE) beyond diabetes.

The company therefore aims at organic growth from its own resources with simultaneous openness to partnerships and strategic alliances in research.

MoH&FW regulates manufacture, sale and import of Oxytocin in India