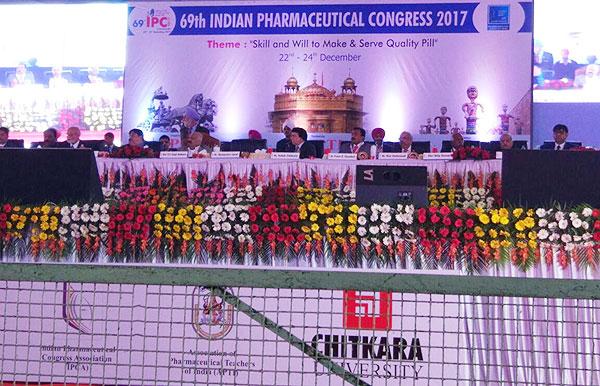 Dr Saraf, in his inaugural address, informed about the gaps that exist in the education system and stressed on the challenges faced by the pharmacist students. He also mentioned that due to regulatory challenges there have been imbalance in growth, both in the industry as well as in the academia. He also informed that this is the right time to consolidate industry and academia, especially on the API front. Taking a cue from the PM’s statement, ‘Hum Chale Na Chale Desh Chal Pada Hai’ he signed off with a similar statement, ‘Hum Chale Na Chale Pharmacist of India Bhi Chal Pada Hai.’

Next, Vijayendrapal Singh Badnore, Governor of Punjab, addressing the august gathering. In his speech he referred himself as a common man and praised the role of pharmacist students played largely in the rural areas. While stressing on the need for skilled pharmacists in the rural areas, he urged the students to consider getting placed in rural areas instead of urban areas, because then they will be serving the society for a better future.

Dr Madhu Chitkara, Vice Chancellor, Chitkara University said that there is an immense need for industry-academia collaboration. He informed that there are lot of pharma as well as diagnostic research works being carried out in our university as well as in other universities, now the industry needs to encourage these research works and take it to the next level. She also mentioned that we need to have better associations with the industry for doing research works on drug discovery, drug delivery, skill enhancement and it is mainly possible through training programmes. She also mentioned that this event will motivate students and educate the pharmacist-student community about entrepreneurship.

Dr Burande gave an energy-filled speech and provided an understanding about the challenges and success of the Indian pharma industry. He motivated the pharmacist-student community to continue enhancing skills and meeting the Pharmacy Vision of 20:20. He also said that Make in India initiative is the most successful programme in the Indian pharma industry. He also stressed that the pharmacists are going to play a very important role in the pharmacy profession.

Highlighting the challenges faced by the industry on the API front and the need for innovation to tackle them, he suggested that the government should come out with some programme or initiative which will lessen the industry’s API dependence on China.

He signed off with the message that there is a need for innovation to develop drug formulation for older population and lots of skill needs to be carried out. Jointly, industry and academia can drive the need through knowledge and skill.

On the sideline of the event, Atul Nasa said that we have been talking about bringing change in the pharma curriculum but there is a lot that still needs be done. He suggested that amendments are needed for the 1940 Drugs and Cosmetic Act, as the existing act mentions that any B.SC graduate can become part of the pharma formulation industry. He suggested that we should revise the qualification from BSc graduates to MPharm to drive positive changes in the industry.

Nasa also suggested that Indian Drugs Manufacturers Association (IDMA), along with other pharma associations such as IPCA, PCI should come together and create industry-academia collaborations for a better tomorrow.

He said that there is a need for reforms in the qualifications for providing wholesaler drugs licenses as well. He also informed that the 70th IPC will be held in Delhi and IPGA will be the host of the event.