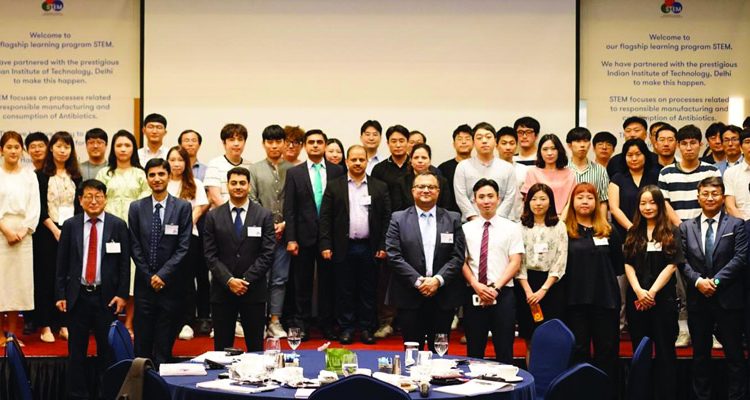 With antibiotic residues from effluents listed as the third highest cause of Antimicrobial Resistance (AMR), pharmaceutical companies will have to deploy clean manufacturing and waste management practices to remove such residues. This would serve to reduce antibiotic pollution and thus reduce AMR. The good news is that there are already products available to help pharma companies switch to cleaner manufacturing processes

While the role of misuse and overuse of antibiotics in increasing Antimicrobial Resistance (AMR) has received a lot of attention, there are many other factors contributing to AMR.
AMR is recognised by the World Health Organisation (WHO) as one of the top ten threats to public health worldwide. According to the AMR Review (2014), nearly 700,000 people die each year due to AMR, and by 2050, this number is projected to reach 10 million per year unless strong actions against the drivers of AMR are taken.

After misuse and overuse of antibiotics, environmental factors like release of inadequately treated antibiotic manufacturing effluent into the environment have been identified as major contributors to the development of drug resistant ‘superbugs’.

Showing signs that the government is gearing up to take action on this front, the Department of Pharmaceuticals (DoP) has reportedly written to pharma industry associations in October to urge their members to monitor and check release of antibiotic residue in their effluents.

The DoP’s letter has reportedly mentioned that the Central Pollution Control Board (CPCB) has set up an expert committee to draft standards for antibiotic residue in industrial effluents. The draft is now close to finalisation and the DoP has asked pharma manufacturers to switch to more sustainable manufacturing processes.

Why antimicrobial residues are harder to treat
According to a review paper, titled Antimicrobial Resistance in the Environment: The Indian Scenario, published in February 2019 in the Indian Journal of Medical Research, (Taneja & Sharma: Antibiotic Resistance in India) antimicrobial classes such as fluoroquinolones and sulphonamides produce stable residues while beta-lactam group of drugs degrade relatively faster from the environment. While the former constitute an ever-growing pool of AMR, the latter indicates recent contamination of wastewater.

Referencing various reports, the two authors, Neelam Taneja & Megha Sharma from the Department of Medical Microbiology, Postgraduate Institute of Medical Education & Research (PGIMER), Chandigarh, India point out that both the types of these drugs are widely present in the wastewaters of Indian pharma companies which pollute the neighbouring rivers, ponds and sea coasts.

For example, Lübbert et al 28 found antibiotic residues from 28 environmental sampling sites in the sewers of industrial area in Hyderabad, India. Wastewater is generated by every pharma company of the world, but as per the risk assessment, the adequate treatment of this wastewater in developed countries decreases the overall associated risk while the lack of optimal wastewater treatment increases its overall risk in India. They also point how how the high cost associated with regular monitoring of antimicrobial levels in pharma waste water makes it a low-priority objective for India. With the antibiotic factories in India and China being the largest contributors in global rise of AMR, the authors caution that a strict vigilance on the effluent produced is needed.

Not surprisingly, they recommend regulation of waste water discharges from pharma companies with regular monitoring of antimicrobial residues in them along with provision of legislative support to punish offenders.

Cleaning up
Some manufacturers of antibiotics have started sensitisation and awareness campaigns to urge pharma companies to switch to cleaner and more sustainable manufacturing practices. Centrient Pharmaceuticals’ partnership with Indian Institute of Technology – Delhi and their workshops on ‘Sustainability Through Excellence in Manufacturing’ (STEM) is one such initiative. The company is a manufacturer of beta-lactam antibiotics.

For example, this August, the pharma company and IIT Delhi conducted a joint workshop in Korea on the theme. The session was attended by nearly 50 participants from manufacturing, R&D, Regulatory Affairs, Quality Control/Assurance and Purchasing departments of leading pharma companies in Korea, to introduce them to clean manufacturing and waste management practices to reduce antibiotic pollution. By 2017, Korea had allocated funds worth 65 million euros to AMR related research, including developing new-age antimicrobials and modernisation of livestock and poultry management systems to eliminate non-therapeutic use of antibiotics.
In India, this September, the company partnered with the Punjab Pollution Control Board (PPCB) to conduct a sensitisation workshop on the environmental aspects of AMR.

Giving more details, Tim Rutten, Business Director Asia Pacific & Africa, Centrient Pharmaceuticals explained, “As manufacturers of antibiotics, it is important that we look at the long-term sustainability of our products, not merely because of business interests, but more so because over the past decades, antibiotics have become the foundation of modern healthcare, not only curing bacterial infections, but enabling advanced medical procedures such organ transplants and cancer treatments, saving millions of lives every year.”

He rues the fact that while in the last few years, awareness about AMR has increased, action to contain this public health threat until recently remained focused mostly on responsible use of antibiotics and the development of new molecules. While Rutten agrees that these are indeed vital fields of action, he emphasises that the role of sustainable production practices also deserves due attention in the fight against AMR. “Several reports suggest that part of the AMR burden can be attributed to environmental factors including effluent containing anti-microbial activity from antibiotic manufacturing units reaching the environment,” he pointed out.

Long-term view required
Urging industry to take a long term view from both a business and a public health perspective, Professor Anurag Rathore, Professor, Department of Chemical Engineering, IIT Delhi explained,“Antibiotic residue that reaches water bodies through effluent and wastewater spurs the development of resistance in bacteria present in the environment, creating ‘hotspots’ where resistant microbes can flourish.”

“By reducing the environmental load of antibiotics, it is possible to slow down the pace of AMR development. This will mean that existing antibiotics will remain effective for longer and so the industry will buy itself a few years’ time of continued sales for these products and for research and development of new antimicrobials,” reasoned Rathore.

Busting some myths, the IIT Delhi expert clarified, “There is a preconceived notion amongst some industry players that responsible manufacturing entails a significant cost burden. However, the antibiotic load in effluent can be significantly reduced by changes in the manufacturing process, for instance, by using enzymatic treatment instead of a chemical one. Upgradation of the treatment technology does require some capital investment, but that is mostly a one-time cost.”

The good news is that there are already products available to help pharma companies switch to cleaner manufacturing processes.

Showing the way forward, Rathore pointed out that advancement is also being made in testing technology and low-cost tests that can measure the level of some antibiotics in effluent are already available. These will help not only manufacturers but also environment regulators charged with keeping tabs on pharma pollution, he concludes.

Giving some direction to pharma companies Rutten said, “Antibiotic manufacturing units need to properly treat their effluent in order to remove APIs and antibiotic residue from it. The industry needs to take responsibility for this and realise that common treatment plants are often not equipped to remove these chemicals.”

According to him, Centrient Pharmaceuticals therefore uses the cleanest production technologies, have dedicated wastewater treatments plants and monitor antimicrobial activity in their effluent.

He appreciates the efforts that India is taking commenting, “At present, there are no regulations governing monitoring and treatment of antibiotic content in effluent around the world. It is encouraging to see that India is working on drafting standards to ensure that effluent being released into the environment through industrial wastewater is below predicted no-effect (PNEC) levels for antibiotic residues.”

In conclusion, Rutten emphasised the ‘One Health’ approach with governments, civil society, and industry playing their part, saying, “The issue of AMR needs to be addressed by a multi-sectoral approach. We all need to take responsibility to fight this global health threat. Industry, governments and non-governmental organisations should work together to ensure sustainability in all parts of the supply chain, from pharma manufacturing, sustainable procurement and responsible consumption.”

International cooperation
Recognising that issues like AMR go beyond boundaries, India’s government has ongoing cooperation with the Netherlands, the UK, Sweden, the US, Norway and Japan to promote and support research on various aspects of AMR and strengthen India’s surveillance capacities.
This October, the Department of Science and Technology, Government of India, along with CII organised the India-Netherlands Technology Summit in New Delhi marking 25 years of the summit. The central theme of the summit was ‘NEXUS’, with discussions focused on co-creating innovative solutions for global challenges pertaining to water, food and good health.
One of the key areas of joint efforts between the two countries has been tackling AMR through a ‘One Health’ approach, as AMR is a multi-faceted challenge, with drivers going beyond mere overuse or misuse of antibiotics in humans and animals. That is why the ‘One Health’ approach also looks at environmental factors that contribute to the AMR burden, including inadequately treated effluent from pharma manufacturing units, run-off from poultry farms, slaughterhouses, and liquid waste from hospitals.

Compared to other countries in the European Union, resistance rates are particularly low in the Netherlands, primarily because of early adoption of the ‘One Health’ approach, which aims to combat AMR holistically in the healthcare system, in animals, in food and in the environment through coordinated action.

The Indian National Action Plan on AMR (NAP-AMR) goes one step beyond the Global Action PLan on AMR, adding a sixth priority – Leadership and Collaborations – which covers international, national as well as state-level collaborations.

The Netherlands’ National Institute of Public Health and the Environment (RIVM), which advises the Government of Netherlands on AMR related matters, has also been working closely with the Indian Ministry of Health and Family Welfare. Speaking about the work, Lav Aggarwal, Joint Secretary, Ministry of Health and Family Welfare, Government of India said, “Our collaboration with the Netherlands has helped us learn from their experiences and success on AMR surveillance, and containment of resistance in the environment.”

The Minister for Medical Care, Government of the Netherlands, Bruno Bruins, who was present at the Summit, gave the example, of the Memorandum of Understanding that was signed during the visit between the Bangalore-based CCAMP and the Dutch public-private partnership AMR-Global, which will kick start India/Dutch collaboration in this field.”

The WHO is the technical partner for the India-Netherlands collaborative project on AMR, and Dr Henk Bekedam, the WHO Representative to India, stated that his organisation will support the analysis and dissemination of lessons learnt to help scale up interventions across India. Work has already started, with an ongoing pilot study being conducted in Andhra Pradesh, a hotspot for antimicrobial pollution, and Dr Sujeet Singh, National Centre for Disease Control, Government of India indicated that the study would be expanded to other states.

The crux of the issue is that tackling the AMR problem requires coordinated action between various stakeholders. For instance, the DoP can only issue a directive to pharma associations but cannot enforce it as that is the purview of the environment ministry. However, a start has been made and one hopes that pharma companies will work towards long term sustainability.

Lonza India plans to double its turnover by 2024

Evolution in packaging over the last 25 years