The three-day conference saw the participation of pharmaceutical experts, regulators, academicians and pharmacy students from across the country. Industry stakeholders were also able to showcase their innovations at an exhibition that was organised alongside the conference 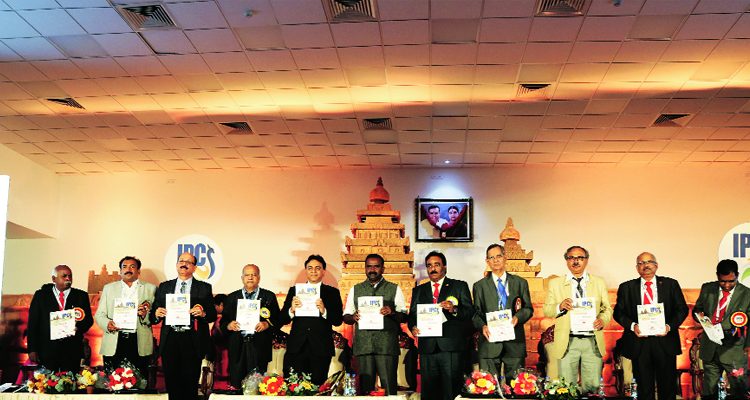 The 71st Indian Pharmaceutical Congress with the theme ‘Pharma Vision 2030: Healthcare System – Role of Regulators’ was recently organised at Sri Ramachandra Institute of Higher Education and Research, Chennai. The three-day conference saw participation from pharmaceutical experts, regulators, academicians and pharmacy students from across the country.

Chief Guest Dr Sylendra Babu, IPS, Additional Director General of Police (ADGP), addressed the students present at the congress and said, “You must be proud to be a student of pharmacy. Pharmacy is important because it is a part of allopathic medicine. In the last 500 years, great men and women have made revolutions in science. That’s why humankind has been able to live up to 90 years.”

Also speaking on the occasion, Dr Dinesh Dua, Chairman, Pharmexcil, shared his vision for pharma industry in 2030. He said, “India is the most happening and visible country in generics being pharmacy to the world.” Regarding the regulation mechanism, he suggested the ‘one world, one regulator’ mechanism.

Ravi Uday Bhaskar, President, Pharmexcil, said, “In line with the thinking process of AIDCOC mission- ‘to achieve professional excellence through continuous training, better coordination among the drugs control officers’, and more interaction with fellow pharmacists to establish pharmacists and regulatory officers as vital link in the chain of healthcare delivery, we have chosen the theme of the congress ‘Pharma Vision 2030: Healthcare System – Role of Regulators’ which aptly conveys that regulators have pivotal role in monitoring the quality and efficacy of the medicines, along with growth and prosperity of national healthcare.”

Highlighting generics, his view was, “Generic drugs continue to be a resounding success in lowering healthcare costs and benefitting patients including developed economies like the USA. Indeed, generics saved the US healthcare system $239 billion in 2013, $253 billion in 2016 and a total of $1.67 trillion in the last 10 years.”

He also said, “As a result of its ability to produce quality medicines at affordable prices, the Indian pharma market crossed $40 billion and is meeting 90 per cent of its domestic needs. Pharma exports recorded $19.13 billion in FY19 with 10.72 per cent growth.

Now, India has become one of the largest producers of generic medicines globally and is positioned as the fourth largest exporter of generic formulations in the volume and 10th largest in value.”

This year’s conference was hosted by AIDCOC.

Guest of Honour for IPC 2019, Dr Somani, in his address, kept the students in focus and said that there are three types of regulators – one is the regulator for quality, safety and efficacy; another is for price and the third one is for education. “If the quality of education is not good, the pharmacy students coming out of pharmacy institutions will also not be good,” he stressed. He further shared his concern about pharmacy education and development of technology, saying, “Having lakhs of pharmacy students coming out every year without a potential to get an immediate job is a real challenge that needs to be resolved. Another challenge is the advancement in the technologies in medicines making throughout the life cycle during which the role of the regulator becomes important. If the regulator is not updated with newer systems and technologies, quality and safety will not meet their expectations.”

Predicting the future of pharmacy for 2030, Dr Krishna Ella, Chairman and Managing Director, Bharat Biotech said that Chemistry is being worked upon 70 per cent, while only 30 per cent work is being done in Biology at present. “In 2030, it is expected to be vice-versa,” he anticipated.

Apart from it, he also told the audience about the importance of manufacturing vaccines in India. “In terms of doses, Indian vaccine protects two out of three children in the world,” he informed. He also told that India is far ahead of China and is a vaccine hub for the developing world.

Ella also shed light on the transformation of the pharmacy. According to him, the old concept involves pharmacist; present one involves pharmacist as well as generics business, manufacturing, QC and QA. “The future concept involves innovation – manufacturing, delivery and nanomedicine, ” he added.
He concluded by saying that we need a change in mindset for better future of pharmacy. “Pharmacy should focus on strong biology and start thinking of innovation,” he insisted.

Industry leaders also talked about finding ways to bridge the gap between industry and academia. Dr PBN Prasad, Deputy Drugs Controller, CDSCO, said, “Academicians should come to the industry with their requirements. Let us reorient towards that and make IPC a successful programme for both the industry as well as academia.”

Addressing a topic titled ‘Innovation to Commercialisation and Campus to Corporate,’ HG Koshia, Commissioner, Food Safety and Gujarat Food and Drug Control Administration, said, “In India, most of the companies are focussing on generics and the country is established as the pharmacy of the world because we know our core competence in generics and we are getting the lead of the 30 per cent of the world population by providing quality and safe medicines.”

Claiming that a regulator can only be a supporter for the industry, S Veeramani, Chairman and Managing Director, Fourrts, said, “Requirement of the market and patient is known to the pharma companies, and they have been discussing it with the academia to find out how much they can contribute towards developing a particular product. The regulator’s role comes when it’s in the process of getting approval. At that time, a regulator can come in and give an idea on how to get an approval for the new product.

Talking about the role of technology in the pharma industry, he said, “Technology is coming into play now and as time passes, it will play more roles because it is quickly developing these days. Currently, a lot is happening in the sector and so much will happen in the upcoming future too.”

Awards were also given by AIDOC to recognise people who have made an immense contribution to the pharma industry. A few other awards were also conferred to academicians by IPA, IHPA and APTI. Industry stakeholders were also able to showcase their innovations at the exhibition that was organised alongside the conference.

It was also announced that the 72nd edition of IPC will be held at Nagpur University in December 2020.