Home  »  Editor's note  »  Will NDA-2’s first budget be any different for the pharma sector?

Will NDA-2’s first budget be any different for the pharma sector? 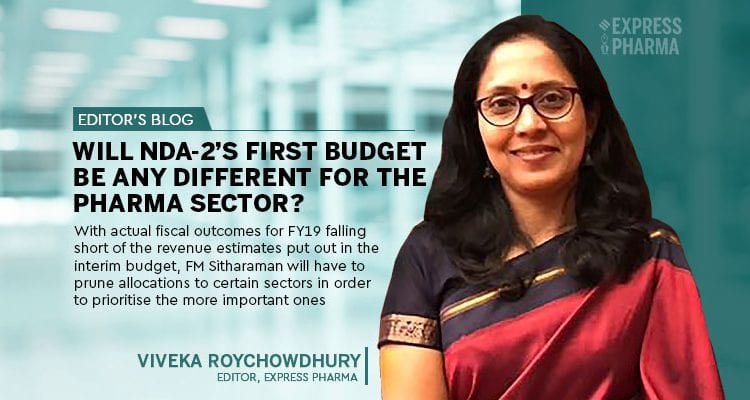 With actual fiscal outcomes for FY19 falling short of the revenue estimates put out in the interim budget, FM Sitharaman will have to prune allocations to certain sectors in order to prioritise the more important ones

As finance minister Nirmala Sitharaman readies to present her first budget on July 5, the pharma sector once again hopes against hope that some of their demands will be met.

A CARE Ratings analysis and predictions for Union Budget for FY2019-20 (FY20) expects that with the increase in raw material prices (especially key starting materials and intermediates) denting not only the profitability margins of the players but also causing concern for national security to provide essential drugs, the government may take initiatives to set up the SEZs exclusively dedicated for manufacturing such materials and intermediates. It may also provide various sops for setting up such SEZs. But such initiatives have been in the planning stage for a long time. In some cases, implementation has been stalled, due to multiple permissions required. Will Sitharaman’s budget give pharma SEZs and API parks the final push?

The agency also points out that the government had started the Jan Aushadhi scheme in order to increase the scope of affordability of medicines. This budget may see the government increase its focus by raising the number of these medical stores to enhance their accessibility. According to a report from Spark Capital, the Jan Aushadhi store network has ramped up significantly in the last two years, with store count currently at approximately 5300, compared to around 3700 in March 2018 and approximately 800 in the previous year. The government targets to add about 2500 more stores by 2020.

But the finance minister (FM) is faced with a tough task. With actual fiscal outcomes for FY19 falling short of the revenue estimates put out in the interim budget, FM Sitharaman will have to prune allocations to certain sectors in order to prioritise the more important ones. In fact, reports indicate that India’s economy hit a five-year low growth of 6.8 per cent in FY2019. Will pharma and healthcare be considered important enough?

The interim budget 2019 presented earlier this year before the polls had a Rs 61,398 crore budgetary allocation for the health sector for the 2019-2020 fiscal, with Rs 6,400 crore earmarked for the centre’s Ayushman Bharat scheme. With the scheme being positioned as one of the flagship initiatives of Prime Minister Modi himself, chances are that this allocation will not be cut. But we will have to wait for July 5 to find out.

It is also true that the Union Budget is not the only avenue for a government to set policy. Landmark initiatives like the Goods and Services Tax (GST) were launched independent of the budget and this still holds true for the NDA’s second term.

There is no doubt that India’s pharma sector needs a hefty policy push. Industry leaders are struggling to cope with the high costs of R&D, given that bets are taking longer than estimated to play out. Dwindling margins on generic drugs translate into lesser funds to plough back into pharma R&D. This June Dr Reddy’s Laboratories Limited (DRL) sold US and select territory rights for some of its neurology brands to Upsher-Smith Laboratories. In April, DRL sold the US rights for selected dermatology brands to Encore Dermatology.

These divestments will bring in sizable revenues. For example, DRL’s deal with Upsher-Smith Laboratories will bring in $70 million as upfront consideration, $40.5 million in near-term milestones and additional financial considerations including, existing contractual obligation and inventory. In addition, DRL will receive sales-based royalties on a quarterly basis. These revenues will be available to fund its research pipeline. We could hear of more such pragmatic deals, as pharma companies in India look at ways to sustain their R&D dreams. Which is why, a helping hand from the government, in terms of more favourable policies, will go a long way.

One of the aspirational targets set in Vision 2030, a report from the Indian Pharmaceutical Alliance (IPA) is that the pharma industry in India will have three to five new molecular entities and 10–12 incremental innovation launches per year by 2030. Right now, that seems like a very tall order.
The IPA report also suggests seven strategic interventions from the government as a key enabler to achieve these aspirations. None of these suggestions are any different from those submitted in previous years and remain unfulfilled. Will NDA-2 be any different for the pharma sector?

Glenmark Pharma gets US FDA nod for cholesterol lowering drug