Will the sector get their shocks post-budget, via a revamped UCPMP, further pricing woes, etc? 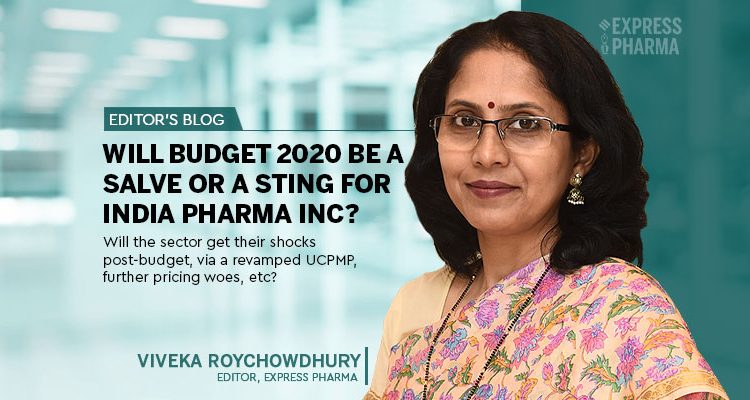 As Finance Minister Nirmala Seetharaman prepares to walk the economic tight rope in her second budget on February 1, there seems to be a renewed hope in the pharmaceutical sector that this time, there will be mercy shown.

Many industry groups have lobbied for an increase in the weighted tax deduction from the present 150 per cent to 200 per cent, with an extension for another five years. This, they affirm, is vital for nurturing R&D and innovation in the industry. The groups have also suggested that the government expand the definition of R&D to include R&D-related work done outside the premises of the company’s R&D centre, for instance, work like clinical trials outsourced to CROs.

This weighted tax deduction on R&D expenses has in fact been progressively reduced, from 200 per cent in the 2010 budget, to 150 per cent on 2017, and it is due to reduce to 100 per cent in 2020 if the FM does not relook the case. This does seem counterproductive when you consider the hype about India being a hub of innovation. Unless there is sufficient incentive to invest in R&D, businesses will slowly wind up their R&D programmes.

The 2020 budget could also see some incentives for the setting up of API facilities, with many presentations underlining India’s dependence on imports, especially from China, for key medicines. The SME and MSME segment has also renewed its long-standing plea that a separate fund needs to be set up for upgrading systems to global norms. In fact, leaders have suggested that the SME/MSME sector could be incentivised to focus on API manufacture to reduce dependence on imports as well as earn export revenues. Unfortunately, even if the 2020 budget does allocate funds for such schemes, it will be a few years till they show impact.

While the pharma sector has so far played a ‘wait and watch’ game with Ayushman Bharat (AB), there are signs that they might be willing to align with the scheme; but again, only if there are carrots like a weighted deduction of 200 per cent of the amount spent on specified activities. For instance, the building of healthcare infrastructure in rural/ semi-urban areas – there have been suggestions that pharma companies would be willing to sponsor health and wellness centres, a vital cog in the AB scheme. While this might sound altruistic, it is clearly a market expansion strategy for the pharma sector, with solid gains in brand visibility. But if it does solve the affordability and access issue, maybe this is an idea worth pursuing.

On the pricing front, industry associations have pointed out that data has shown that while the number of essential drugs in the National List of Essential Medicines (NLEM) has increased, there has been no corresponding increase in patient-use, if sales volume is considered as one indicator. The NLEM has expanded to 870 drugs, from the initial 530 essential drugs. This represents a 64 per cent increase. But as per AIOCD data, sales value and volume percentages have not grown in sync, both moving up just one per cent, from 14 per cent and 24 per cent to 15 per cent and 25 per cent, respectively in this five year period.

In contrast, the associations point out that the non-NLEM products have seen modest price hikes of 3.5 per cent over the last three years, far less than the 10 per cent allowed under DPCO 2013. This is a clear indication that policy-driven regulation is not as successful as market forces, which keep process competitive.

Disruption in the pharma sector, or any sector, for that matter, is not linked just to the Budget. For instance, with the Uniform Code of Pharmaceutical Marketing Practices for Indian Pharmaceutical Industry (UCPMP) being revamped by the Department of Pharmaceuticals (DoP), associations have also asked for clear definitions of which expense would be considered ‘ethical’ and which ‘unethical’. This is especially required because the pharma sector has issues like samples given to doctors, doctors being hosted at medical conferences, etc.

While it is learnt that the DoP has included some part of these suggestions to the finance ministry, we will have to wait for February 1 to see how far the FM will go to accommodate the pharma sector.