Home  »  Editor's note  »  Time for a policy push for pharma 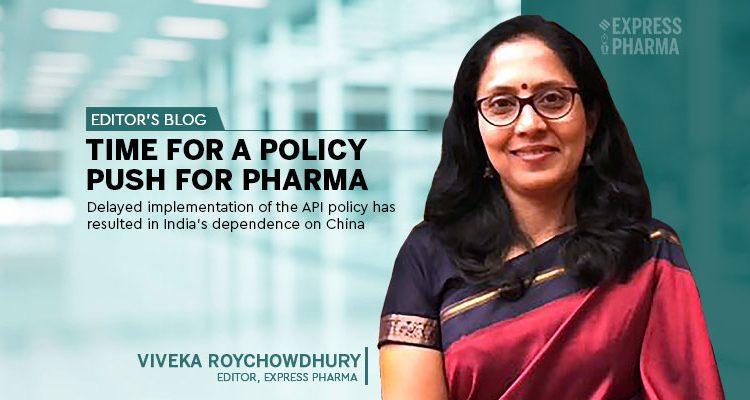 The recent Union Budget was, once again, a huge disappointment for the pharma sector. With such a huge repeat mandate, this is the honeymoon year for the NDA-2, when they could have taken bold steps. Yet, Finance Minister Nirmala Sitharaman chose the safe incremental way.
And though the pharma sector will benefit indirectly from the increased allocation to health schemes, there was no firm push or incentives.

The pharma sector has had several long standing demands, like the one for weighted deduction for R&D. But this and others were ignored once again. Such a step would have decreased the burden of investments in R&D, especially when the return on investments (RoI) on R&D is taking longer than expected. The stats prove that focus on pharma R&D is faltering. According to ICRA, aggregate R&D spends of top few domestic companies which had increased from 5.9 per cent of sales in FY2011 to close to 9 per cent in FY2017, moderated to 8.8 per cent during FY2018 and dropped further to 7.8 per cent in FY2019. ICRA expects R&D budgets to remain at 7.5 per cent-8 per cent. This optimisation of R&D, due to decreasing R&D profitability, will result in slimmer R&D portfolios over the next few years. This is not a good long-term trend.

Satish Reddy, Chairman, DRL, regrets that there was nothing in the Union Budget to fuel growth in the healthcare and pharma sectors, which is disappointing. He was particularly keen on seeing a change in the weighted deduction for R&D which did not happen. A positive policy move of this kind would have spurred R&D and innovation in pharma and other sectors according to him.

DRL has been one of the earliest among pharma companies in India to invest in R&D. But the longer than expected gestation period seems to be straining the company’s resources. DRL has already started selling some brand assets to finance current research projects.

Delayed policies and faulty implementation have endangered the fundamentals of India Pharma Inc. For instance, the delayed implementation of the API policy, to incentivise Indian companies to manufacture key intermediates and APIs, has resulted in India’s dependence on China. Around 67 per cent of India’s bulk drug imports in FY19 were from China. And with little of no new investments in API facilities in India, the situation will only get worse.

This dependence for APIs is proving costly on two fronts. We cannot control either input cost or more important, quality. While the first erodes our profit margins, the second is a grave reputational risk. The risk can be mitigated with regulatory compliance, but this adds to the capex and further erodes profit margins.

A report from India Ratings and Research (Fitch Group), believes that US-focussed Indian pharma players would be required to step up regulatory compliance in FY20-FY30 as they invest in a complex generics/specialised/innovative play. Input quality risk stemming from high dependence on Chinese players has been an emerging concern in 2018-2019, leading to product recalls initiated by major players. The Fitch agency believes that securing the supply chain is likely to emerge as top priority as several complex generics and innovative pipeline will hit the markets in the next decade.

We will soon be in a similar situation on the R&D front as well. More companies will reduce research budgets. Will policy makers arrest this slide before it is too late?
India has strong laws, but weak implementation. This has been the long standing criticism in India.

But what about protecting those who implement these laws? On June 21, Ravindra Mohan, a drug inspector in Bihar was assaulted while carrying out his duties. This follows the tragic death of Neha Shoree, drugs inspector and zonal licensing authority in Punjab, on March 29 this year. She was shot dead, in her office no less, by a chemist whose license she had cancelled for selling habit forming drugs.

The All India Drug Control Officers’ Confederation (AIDCOC) has been urging the states to provide security cover for its officers so that they are able to conduct their duties without fear of reprisal. More than 30 per cent of AIDCOC staff are women officers and this lends an particular urgency to the situation.

It is ironic that on one hand we talk of identifying and penalising counterfeiters. But on the other hand, we do not seem to appreciate the guardians of our medicines. How many Neha Shorees will it take for us to protect our protectors?

‘Our goal is to attain leadership in Indian veterinary vaccine segment’