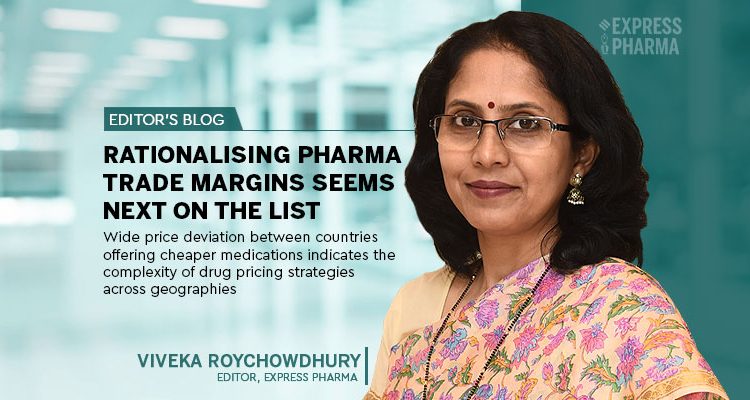 There is no doubt that India has some of the lowest medicine prices in the world. But there is still room for improvement in some areas. Data from initiatives like the Medbelle’s Medicine Price Index 2019 give policymakers and patient groups data-driven reasons to support tough but necessary decisions.
Of the 50 countries on the Medicine Price Index 2019, Thailand, at the bottom-most rank, 50th, has the cheapest medicines while India is ranked at 46th. The US, of course, tops the list. The Index was put together by UK-based ‘digital hospital’ Medbelle. In the process of examining the accessibility of the world’s best hospital systems, the digital healthcare provider further investigated on the prices of medicine, as it is one of the most common barriers to healthcare access in many locations.

The Index 2019 thus compares the cost of 16 commonly used pharma medications, spanning conditions from heart disease and asthma to anxiety disorders and erectile dysfunction. Average prices of both the brand compound and their generic versions were included in order to have a complete profile of each medication. Lastly, the dosage size was normalised to make the price comparable.

While the ranking of the most and least expensive countries for medicines may not surprise most of us, what is truly striking is the huge price disparities between countries.

Patients in Thailand buy medicines which cost 93.93 per cent less than the median price, followed by Kenya (-93.76 per cent), Malaysia (-90.80 per cent), Indonesia (-90.23 per cent), and India (-73.83 per cent).
Note that there is more than a 20 per cent increase between the prices of Indonesia and India, as well as between India and the next cheapest destination (South Africa, -53.72 per cent). This means that there is a wide price deviation even between the countries with the cheapest medicines.

The medication with the highest price deviation from the global median is the blood pressure drug Lisinopril (brand name Zestril), which costs 2682.56 per cent more in the US than the global median price.
With diabetes becoming a huge concern in India, how affordable is a common insulin brand, glargine (Lantus) in the country? Here, the country jumps up to the 23rd place, with a price deviation of +6.62 per cent. The US remains the most expensive (+557.86 per cent), followed by Argentina (+169.96 per cent) and Chile (+168.17 per cent). The least expensive is Egypt (-43.51 per cent), followed by Turkey (-33.93 per cent) and Poland (-30.29 per cent).India is the least expensive (-74.20 per cent) for Humira (Adalimumab) used to treat arthritis, bowel disease, skin disorders; as also for Zithromax (Azithromycin) used to treat bacterial infection (-88.46 per cent); and for immunosuppressant Prograf (Tacrolimus) used to prevent rejection of transplants (-87.46 per cent).

The Index has two red flags for India signalling higher prices. Prices for Viread (Tenofovir) a medication for Hepatitis B, HIV/AIDS are 162.87 per cent more than the median. Secondly, at 92.41 per cent, India’s percentage deviation from the median price of all 16 generics drugs is higher than desirable.

This could mean that generic manufacturers still have considerable margins in India, compared to other countries. Therefore, policymakers could consider measures to moderate prices in instances where the deviation is not justified.

Policymakers in India have been cracking down on medicine prices more aggressively in the past few years. Trade margin caps on medicines under price control were introduced in the recent past and there were discussions to implement a similar formula for non-price control categories as well.
After a meeting on November 22, reports quoting heads of industry associations as well as policymakers indicate that manufacturers and distributors have agreed to cap trade margins on non-price control medications at 30 per cent.

While this decision means lower prices for patients at least on certain medications, will stockists and retailers take this hit to their margins? Or like in the past, ask manufacturers to compensate them for the cut in their trade margins? And how will the already stressed pharma manufacturers respond to these demands?

Will this further increase the divide between online and offline pharma trade channels, as the former might be able to absorb the trade margin cut better thanks to lower overheads and better inventory control?
Offline trade channels have hit back at pharma companies showing any signs of engagement with new age partners, like digital apps etc. Thus, this decision has a lot of implications and regulators will need to watch the repercussions very closely.