Own up, course correct and move on 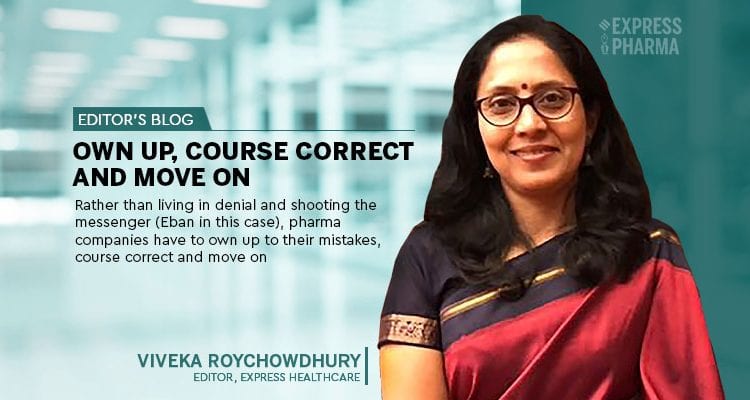 Rather than living in denial and shooting the messenger (Eban in this case), pharma companies have to own up to their mistakes, course correct and move on

With the BJP making another clean sweep at the Centre, the party leader, Narendra Modi has been granted one more term. One hopes that they will make good on their promises for the healthcare and pharma sectors, because without a healthy population, none of the other targets will be achieved. For starters, they could take some pointers from the wish-list of the pharmaceutical industry, which was the cover story of our last edition (http://www.expressbpd.com/pharma/cover-story/a-report-card-and-a-wishlist/409452/ )

But there is no doubt that the pharma sector too needs to take note of what is expected of them, collectively as well as individually. There have been quite a few examples of the misdeeds of pharma companies. The latest is a civil action suit filed on May 10 by the attorney generals of 44 US states, led by Connecticut, for price fixing of generic drugs. This was a telling indictment of 20 pharma companies, seven of them from India.  (http://www.expressbpd.com/pharma/latest-updates/seven-indian-pharma-companies-among-the-20-sued-by-the-us/409474/)  Some of these companies have already indicated that they will contest the allegations but the 524 page public version of the complaint has painstakingly collected evidence over years, all of which cannot be simply argued away.

If the anti-trust lawsuit focussed on unethical marketing practices, then investigative journalist Katherine Eban’s book, Bottle of Lies: The Inside Story of the Generic Drug Boom red-flagged shoddy manufacturing practices by pharma companies. Eban’s book focusses on two countries, China and India, and on selected companies from India, notably Ranbaxy and Wockhardt. The Twitterati responded predictably. Accolades for Eban outnumbered those who pointed out that the book deals with inspection results and incidences that are a decade old and have reportedly since been fixed. Yet other commentators hint that Eban could have a hidden agenda (For example, this comment from Jack S, New York, May 15, in response to the New York Times review: The choice to make it about the ‘Generic Drug Industry’ has me wondering if the ‘non-fiction’ book isn’t just a piece of big pharma marketing fiction rather than an accurate portrayal of a massive global industry with hundreds/thousands of factories around the world.)

It is but natural that companies will do anything to protect their turf (brands) and their revenues. So we have come to expect the arguments discrediting generics, playing on the argument that cutting costs equals cutting vital corners and therefore results in less effective treatment outcomes.

But Eban’s work spans decades and this is her second book on the malpractices behind generic medicines. The facts speak for themselves. Yes, pharma companies making generics, across nationalities, have defaulted on good manufacturing practices (GMPs) and we have the import alerts and observations to prove this. But brand name pharma companies too run into problems with the US FDA. One writer makes the case that an entire industry or country cannot be judged by the actions of a few bad apples, who are present in all companies and countries. ( https://www.linkedin.com/pulse/american-jugaad-uday-shetty)

Rather than living in denial and shooting the messenger (Eban in this case), pharma companies have to own up to their mistakes, course correct and move on. They will have to toe the line if they want to safeguard their reputations. And export revenues. While some companies have managed to rectify past shortcomings, different slips pop up in current inspections. For instance, take Cadila Healthcare’s formulation manufacturing facility at Moraiya, Ahmedabad, which was inspected from from April 22 to May 3. The inspection ended with 14 observations, but the company’s note to the stock exchanges emphasised that there were no repeat observations or data integrity related observations.

But the 14 inspectional observations do raise valid concerns. Observations on inadequate cleaning and maintenance of equipment, inadequate validation of the aseptic process, could impact quality of the finished product. Backup data files were not maintained, nor was there a thorough review of unexplained discrepancies. Lab controls did not include the establishment of scientifically sound and appropriate test procedures and in-process specifications were not determined by the application of suitable statistical procedures where appropriate.

Aseptic processing areas were deemed deficient regarding the system for cleaning and disinfecting the room and equipment to produce aseptic conditions and sterile wipes used during cleaning of equipment in specified aseptic filling lines, intended to remove particles from equipment surfaces, were observed to contain loose fibrous threads. Lastly, the master production and control records lacked complete manufacturing and control instructions.

Ironically, these may seem like measures which pharma companies ought to make as the base level for all production facilities. Often, it is a case of a stitch in time saving nine, i.e. anticipating and fixing things as soon as they go wrong. The problem is when companies refuse to admit that improper cleaning or low air quality in medicine manufacturing facilities will  impact quality of the final product. The task of making life-saving medicines puts a great responsibility on the shoulders of these companies and it is time they lived up to this trust. Just as we hope BJP/Modi lives up to theirs.