Lupin sells stakes in Kyowa but its not a Sayonara

With headwinds in overseas markets, it is vital for pharma companies in India to grow their presence in the domestic market. But here too the going will be slow and tough 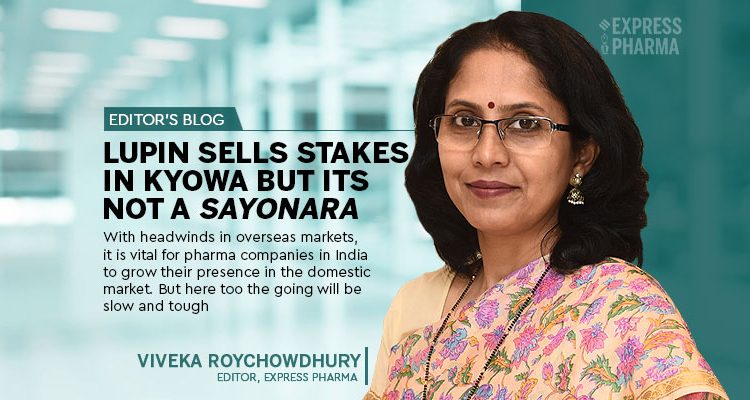 Lupin’s recent move to sell stakes in its Japanese subsidiary Kyowa, while continuing its engagement with the company’s new owner (PE firm Unison Capital Partners), could signal a growing pragmatism among pharma promoters in India.

The promoters are positioning the stake sale as a partnership with the PE firm, like handing the baton to the next player in a relay race. As Vinita Gupta, CEO, Lupin commented, “We are very pleased to partner with Unison, a leading healthcare focussed private equity player.”

Japan’s pharma market has evolved a lot in the past 12 years since Lupin bought majority stakes in Kyowa in 2007. With an ageing population, the Japanese government warmed up to generics and companies like Lupin seized the opportunity to set up base. “Lupin grew the Kyowa business multi-fold in the last 12 years to emerge as the fifth largest generic company in Japan,” pointed out Nilesh Gupta, MD, Lupin.

But profit margins in the Japan pharma market were eroding, thanks to rising regulatory norms and pressure from the Japanese government.

However, the stake sale is definitely not sayonara for Lupin. As Nilesh Gupta put it, “We believe that the partnership with Unison will enable Kyowa to leverage its strong platform and human capital to achieve its full potential. We remain committed to advancing our complex generics, biosimilars and specialty portfolio globally, including Japan.”

This deal looks like a win-win for all partners. Lupin gets to erase a large part of its debt while Unison gets control of the 5th largest generic company in the Japanese pharma market.

Lupin has been hit by recurring regulatory red flags from the US FDA. Remediation work and facility re-inspections have kept valuations lower than expected in 2QFY20 to the delays of potential approvals.
The flip side to the deal is that Lupin will lose revenues from the divested business, which were JPY 14,241 million in H1, FY 2020 (JPY 28,335 million in FY 2019). Lupin’s global business will be impacted to the tune of around 13 per cent according to analysts.

Unison is a leader in healthcare investments, with an emphasis on investments in the pharma sector and there are hints of a longer-term engagement. As Tatsuya Hayashi, Founding Partner, Unison said, “We also look forward to supporting Kyowa’s partnership with Lupin and exploring opportunities for Unison to collaborate further in the healthcare sector with Lupin and its unparalleled global network in the healthcare industry.”

With Unison’s experience in the Japan market, the PE firm is ideally placed to steer Kyowa’s strategy in tune with Japanese regulations.

With such headwinds in overseas markets, it is vital for pharma companies in India to grow their presence in the domestic market. But here too, the going will be slow and tough.

Market research firm AIOCD AWACS’ data on medicine sales for October was not very encouraging for the sector. Patients can however take comfort that purchases of medicines across the country showed a decline, a sign perhaps that monsoon ailments are on the way out.

A certain amount of moderation was expected as the prolonged monsoon, which pushed up sales in the previous two months, finally receded. But the quantum of de-growth took most industry stakeholders by surprise.

This is disappointing news for some export- oriented companies, which had started to re-look strategies for the domestic market as exports to and revenues from key markets became challenging. According to the Directorate General of Commercial Intelligence and Statistics (DGCIS), Government of India’s total pharma exports in FY-2018-19 were $ 19134 million, with the lion’s share of exports to the US
($ 6145.67 million).

Industry stakeholders are taking solace from a forecast from the Pharmaceuticals Export Promotion Council of India (Pharmexcil) that the pharma exports from the country are likely to touch $22 billion in FY2019-20, which would be a growth of over 14.5 per cent. Let’s hope for a positive update on this front soon.