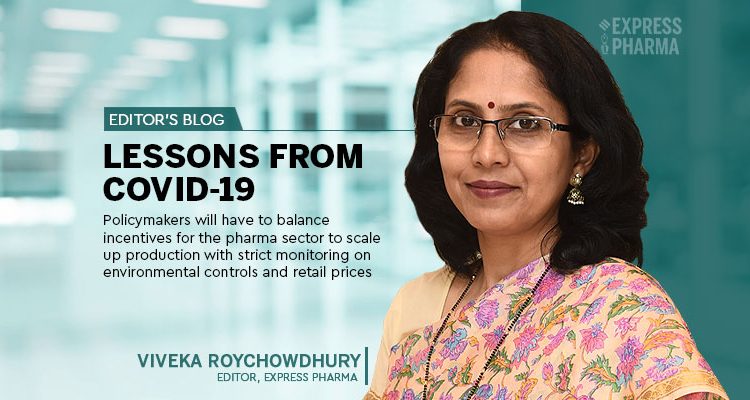 On March 11, the WHO characterised COVID-19 as a pandemic. While this sounds scary, WHO Director-General Dr Tedros Adhanom Ghebreyesus took pains to point out that the epidemic seems to have stabilised in China and the Republic of Korea, which are two of the four countries with more than 90 per cent of the cases. While China was the origin, secondary disease hot-spots have now emerged in South Korea, Italy and Iran.

The infection in India seems to be reaching its peak, with the first death on March 12, and the total number of positive COVID-19 cases standing at 75 as on March 13. This includes 17 foreign nationals currently in the country who have tested positive. The number of new cases being confirmed per day across various states, currently in the high teens, is predicted to rise, following the trend observed in China.

The ripple effect of COVID-19 continues. Individual states are shutting down cinemas, gyms and asking schools to shut except for conducting examinations. Industry events are also being postponed. For instance, iPHEX-2020 scheduled over May 6-8, has been postponed. Those that are being held, like the PharmaTech Expo & LabTech Expo 2020, organised from March 4-6 at Bombay Exhibition Centre, Mumbai, gave away free hand sanitisers to visitors as a reminder to take precautions.

On the other hand, alarm over the spread of COVID-19 has resulted in a spike in sales of medicines in February. According to data from AIOCD AWACS, sales of medicines at the retail level increased by more than 4 per cent in February, and a volume growth of 3.8 per cent over the previous month. Eight of the top 10 therapies registered a double digit growth. The top three therapies in terms of growth were respiratory (17.9 per cent), anti-infectives (14.1 per cent ), and cardiac (13.3 per cent). In the respiratory section, 18 sub-groups grew by an average of 16.8 per cent growth, while among anti-infectives, the top 8 sub-groups had an 18.7 per cent average growth.

The reason for this growth is obvious: panic buying and stocking medicines for the next few months in anticipation of shortages due to the shutdown of API factories in China. Business intelligence agency AIOCD AWACS also attributes this growth to February generally seeing an increase in viral infections, which explains the higher growth in both respiratory and anti-infectives sections. Given these factors, this growth may not sustain.

The situation has also seen e-commerce platforms step up to meet shortages. While stock levels have been increased to meet demand, there is no doubt that inventory levels are being tracked more closely. COVID-19 has thus been a tough lesson in inventory management across the pharma supply chain.

The cover story in the March 16-31, 2020 edition of Express Pharma suggests that similar silver linings can result in the COVID-19 cloud. For instance, policies to incentivise the setting up of bulk drug and API manufacturing plants can be fast-tracked. However, setting up new facilities will take time. A better solution seems to be the upgrading/revamp of older existing facilities, either as PPPs, etc.

But have we missed the bus already? China is already revving up. While ground-zero Wuhan city might need eight weeks or so to get back to some normalcy, other regions are due to start dispatching KSMs and APIs in about two to three weeks.

There are already reports that Chinese authorities are holding back exports of some APIs and KSMs. This could be for two reasons. Once, since this is a new virus, nothing much is known about the chances of a recurrence of COVID-19 infection, even in patients who have recovered. Secondly, the Chinese authorities might be creating an artificial scarcity so that prices can be hiked to make up for the lost time.

Even as we need to scale up the manufacture of APIs and KSMs, it is right that the government takes time to frame these policies. Pharma manufacturing is one of the most polluting industries worldwide and the government will have to ensure that no short cuts are taken with regards to impact on the environment, effluent treatment and discharge. As WHO Director-General Dr Tedros Adhanom Ghebreyesus cautioned in his March 11 address declaring COVID-19 as a pandemic, “All countries must strike a fine balance between protecting health, minimising economic and social disruption, and respecting human rights.”