CDSCO is blowin’ in the wind 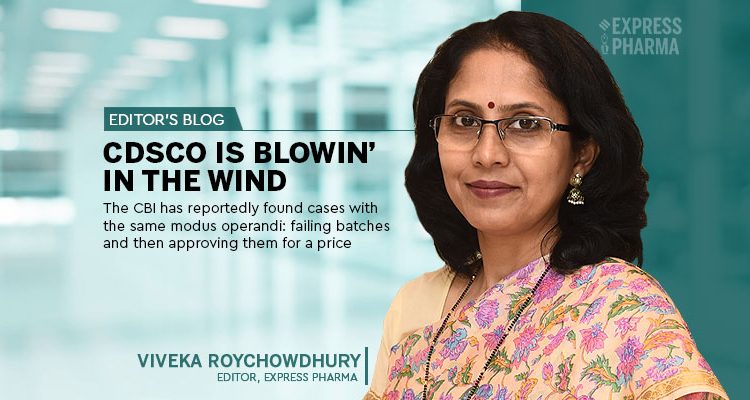 With apologies to Bob Dylan, I have adapted his 1962 iconic protest song, Blowin’ in the Wind, to comment on incidents post the recent arrests of staff in India’s drug regulator.

How many samples need to be on the NSQ list and then approved
Before the CBI gets wind of the modus operandi?
How many arrests and CBI raids will it take to clean up CDSCO
Before we have a corruption-free drug regulator?
And how many traps need to be set
Before bribe givers stop offering bribes to close the file?
The answer, my friend, is blowin’ in the wind
The answer is blowin’ in the wind

In a letter addressed to Prime Minister Modi dated August 28, 26 manufacturers from the Punjab Drug Manufacturers Association (PDMA) have given details of the corrupt practices at the CDSCO/DCGI and its impact on the spirit of ‘entrepreneurship/ industry which is the backbone of the economy.’

The letter comes after Dr Naresh Sharma, Deputy Drug Controller at the Delhi headquarters of Central Drugs Standard Control Organisation (CDSCO) was arrested by the the Central Bureau of Investigation (CBI) on August 16. This follows the arrest of Ankur Bansal, a Baddi-based CDSCO drug inspector who was caught red-handed accepting Rs 1 lakh bribe from officials of Amritsar-based Kwality Pharma.

The CBI has reportedly found other cases with the same modus operandi: failing batches and then approving them for a price. The CBI has reportedly either arrested or picked up at least two more senior officials, one formerly with the CDSCO and the other formerly in the Ministry of Health & Family Welfare. An Assistant Drug Controller from Himachal Pradesh has also been arrested by the vigilance cell while another, referred to as the “most high income earning officer” has been transferred from the state drug inspectorate to the state health department protect him from the CBI!

The CDSCO moved fast to distance itself from Dr Sharma, suspending him in two days. And stating that it has ‘zero tolerance towards corruption and is committed to act stringently against any act of corruption.’ The CDSCO has attempted to clean up its act, with multiple transfers of inspectors last March. (www.expresspharma.in/editors-note/a-spring-cleaning-at-the-cdsco/; www.expresspharma.in/editors-note/going-beyond-cosmetic-changes/) The CBI raids could be a continuation of this clean up process.

But drug inspectors have another take. One senior inspector worries that the CBI is being used to coerce the few honest officers left in CDSCO who have suffered the brunt for not toeing the line i.e. asking for bribes. The PDMA letter quotes drug inspectors justifying bribes as a way to recover the bribes they paid to get these positions!

And for every bribe taker, there is also a giver.

So, shouldn’t the senior managements of pharma companies ensure that their staff down the line do not offer bribes?

If the regulators themselves feel targeted, what about the regulated? As a promoter of an SME pharma company puts it, “We are exploited by inspectors all over India because they use the danda (stick) given by the Drugs Act 1940 whereas they should be facilitators.” He welcomes the immediate penal action against Dr Sharma, in the hopes that it will be a deterrent, as this is “just the tip of the iceberg.” He alleges that there is rampant bribing, with the benefits flowing to the very top. Other sources question how the CBI stepped in only after top ranking officials were moved out of the health ministry.

The same SME pharma source alleges that the product tests are routinely manipulated by faking reports to show out of range assay results, or the presence of ‘related substances’ or ‘impurities’. Almost 99 per cent of the samples from the SME sector are thus deemed ‘Not of Standard Quality’ (NSQ), hinting that bigger players have made deals with the drug testing laboratory staff.

Is this sour grapes on the part of the SME sector? SME pharma players today face rising costs due to multiple issues as detailed in the PDMA letter. The result is poor balance sheets and banks refusing to give loans to SMEs, sending them into a tailspin.

While the reputation of India’s drug regulator is taking a severe beating, observers agree that just as GMP violations are not confined to India alone, there have been black sheep among the staff of global regulators as well.

The point is, will the CBI go the whole way? Does the CBI have its own agenda? Will the few good men and women left in the CDSCO persevere? Or perish, when they refuse to fall in line?