Home  »  Editor's note  »  Big Pharma to get bigger, but what about patients?

Big Pharma to get bigger, but what about patients?

The second patent cliff is around the corner, as patents for branded molecules with cumulative global sales of over $ 251 billion are expected to expire between 2018 and 2024 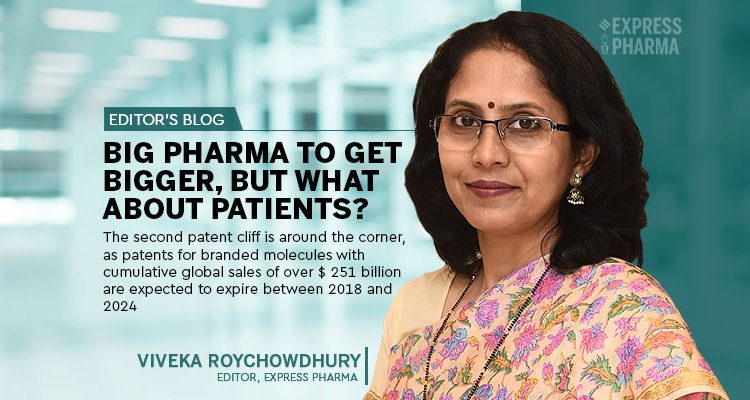 The merger between Pfizer’s Upjohn division and Mylan announced in end July could be the trigger for more such deals. In fact, 2019 could break all previous records on deal making. The generics space is more than ripe for such deals as most generic companies are facing price erosion and falling margins.

The new company will have a combination of Pfizer’s established generic brands like Lipitor and Viagra from Upjohn and Mylan’s existing product portfolio and future pipeline, which has significant investments in complex generics and biosimilars. The merger will allow the new company to leverage the synergies, “by bringing Mylan’s growth assets to Upjohn’s growth markets” as Dr Albert Bourla, Pfizer CEO put it.

The deal is part of Pfizer’s long term strategy to sharpen its focus on its innovative molecules and vaccines business, after hiving off consumer health to GSK. For Mylan, its a chance to pip other generic rivals to the top of the global generic rankings.

Pfizer, Mylan will benefit from synergies but will they pass on the benefits to patients? The two companies were already working together. Pfizer has been manufacturing Mylan’s emergency anti-allergy auto injector, EpiPen which has been hit by a backlash as patients protested the price hikes.

In fact, the collaboration for EpiPen is a perfect example of the rationale for the proposed new company. EpiPen has been hit by manufacturing glitches, leading to shortages. But it is not yet clear if Pfizer’s Meridian Medical Technologies unit which makes the EpiPen, will also be part of the merger. What’s more, Mylan’s EpiPen has competition from generic versions from Teva, Novartis, Amneal Pharma and Kaleo.

As the deal proceeds, three issues need to be tracked. Firstly, the proposed mega merger is subject to approval from the US Federal Trade Commission. Against the backdrop of the price collusion suit filed by 44 US states against 20 pharma companies, one of them Mylan, it is only to be expected that the US FTC will scan the proposed merger for any whiff of monopolies.

Secondly, the proposed new company faces the risk of a messy integration. Many mega mergers have not achieved their proposed synergies due to a variety of reasons.

Thirdly, mergers are generally followed by layoffs and job losses. The new normal in the global pharma industry seems to be right-sizing. Be it GSK cutting 200 jobs at its Worthing, UK site as it phases out manufacturing antimicrobial active ingredients at this site by 2020. Or Sun Pharma culling 85 R&D positions at their Vadodara R&D unit.

The Pfizer/Upjohn- Mylan mega merger could also result in redundancies. For now, the news is positive for India as Mylan’s Hyderabad operations will be one of the three Global Centres of the new entity.
There is little doubt that the Pfizer/Upjohn-Mylan deal will result in the world’s largest generic company. But it needs to be seen as an opportunity, not a threat for other big generic players.

Generic majors like Teva, Sandoz etc as well as their counterparts from India, like Sun Pharma, Aurobindo Pharma, Glenmark Pharma, Lupin Pharma, etc are most likely already considering their options as they gear up for what’s being billed as the ‘second patent cliff.’ Patents for branded molecules with cumulative global sales of over $ 251 billion are expected to expire between 2018 and 2024. We can therefore expect more such deals as generic players position themselves to make the most of these opportunities.
Such deals will see the relocation of manufacturing from high cost facilities to more affordable locations. The GSK Worthing site is just the most recent example.

The trend is that manufacturing will move to emerging nations while R&D efforts will consolidate in developed countries. If this strategy will help pharma companies to make high quality, affordable medicines more accessible— in both the developed and emerging nations— then it will be a win-win situation.