Home  »  Editor's note  »  After sartans and ranitidine, where will NDMA show up next?

After sartans and ranitidine, where will NDMA show up next?

While regulators and pharma companies try to understand if it is the product or the process that is at fault in the ranitidine riddle, the larger question is, in which medications will NDMA and other impurities show up next? 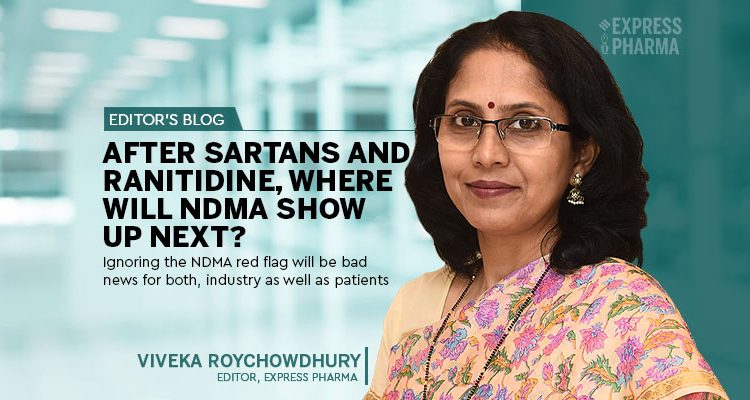 The presence of N-nitrosodimethylamine (NDMA), a probable carcinogen, in sartans and now ranitidine medications has once again proved just how little we understand the pills we pop. NDMA has been on the regulatory radar for a long time. It has been detected in several common foods, (including cereals!) and the conventional wisdom is that in small doses, it may not be linked to any major diseases. But there have been some studies linking it to stomach and bladder cancers in humans, among others. Hence there are strict limits on its levels in foods and other products.

Regulatory agencies have reacted very different to the ranitidine riddle. While some regulators consider that a few batches of ranitidine may have been made using an active pharmaceutical ingredient (API) containing an impurity with NDMA, others reason that ranitidine as a molecule is too unstable and could be the problem.

While regulators and pharma companies try to understand if it is the product or process at fault in the ranitidine riddle, the larger question is, in which medications will NDMA and other impurities show up next? Its presence in other medications could have escaped notice so far simply because the samples were not required to be tested for it.

When higher than acceptable levels of NDMA showed up in certain batches of sartans, the contamination was traced to changes in the manufacturing process at an API manufacturing unit in China. Now, more medicines are being tested for the presence of NDMA and that’s when US-based pharmacy Valisure tested ranitidine samples.

Since the original gas-chromatography method required the drug to be heated to 130°C – causing its break down and high levels of NDMA – Valisure decided to try other tests. These tests exposed the drug to gastric fluids at the body temperature of 37 0C to mimic the stomach’s environment, the place where ranitidine was supposed to do its job of controlling acidity and ulcer formation.

Ignoring the NDMA red flag will be bad news for both, industry as well as patients

Once again, Valisure’s scientists found NDMA levels far above the 96 ng limit set by the US FDA. They deduced that even though NDMA may not be present in ranitidine products, it could be formed once it enters a person’s body. Valisure alerted the US FDA with these results in September and asked for a recall of all ranitidine products, irrespective of its source.

Regulators have been very measured in their response. For instance, acting on Valisure’s alert, the US FDA announced on September 13 that preliminary tests had found low levels of NDMA in some ranitidine medications, but also specified that ‘the levels the FDA is finding in ranitidine from preliminary tests barely exceed amounts you might expect to find in common foods.’ Therefore the agency did not ask individuals to stop taking ranitidine at that point of time but advised that patients, who were taking prescription ranitidine and now wish to discontinue use, should talk to their healthcare professional about other treatment options. Those on OTC ranitidine were nudged to ‘consider using other OTC medicines approved for their condition.’

Unlike the US FDA, Health Canada asked all companies to stop distributing ranitidine drugs in the country, indicating that “current evidence suggests that NDMA may be present in ranitidine, regardless of the manufacturer.” France too recalled all ranitidine products.

India’s Central Drugs Standard Control Organisation (CDSCO) seems to have followed the US FDA’s stance and did not call for any recall. It instead asked state regulators to “communicate to the manufacturers of ranitidine API (active pharmaceutical ingredient) and formulations … to verify their products and take appropriate measures to ensure patient safety.”

The situation was further complicated by the fact that companies use different API suppliers for different markets. For instance, GSK manufactures certain brands of ranitidine using API from Saraca Laboratories and another supplier, SMS Lifesciences India, for supply to the Indian market. When Saraca Laboratories was notified by the European Directorate for the Quality of Medicines (EDQM) that its certificate of suitability for ranitidine had been suspended with immediate effect, GSK recalled batches made from Saraca’s API but product manufactured using API from SMS were not recalled from the market and remained on hold pending test results.

On October 23, DRL confirmed that it had initiated a voluntary recall on October 1 of all of its ranitidine medications sold in the US due to confirmed contamination with NDMA above the levels established by the FDA even though, “To date, Dr Reddy’s has not received any reports of adverse events related to the recall of Dr Reddy’s Ranitidine products.’’

Regulators are changing their procedures to cope with the challenge of a difficult-to-detect impurity. On October 23, the US FDA released a second liquid chromatography-mass spectrometry (LC- MS) method which manufacturers and regulators could use to detect and quantify NDMA in ranitidine samples. The agency’s previously posted LC-MS method for NDMA in ranitidine was apparently not as widely available as the second posted method.

The presence of NDMA and other related carcinogens has reminded regulatory agencies and pharma scientists that some side effects of medicines and/or related contents, might not be visible in all patients, or could surface after years of use. Hence manufacturers should expect more stringent levels of review and testing for any new drug approvals. While that means more bad news for the industry, its good news for patients. However, ignoring the NDMA red flag will be bad news for both, industry as well as patients.