A silver lining to withdrawal of GSP benefits? 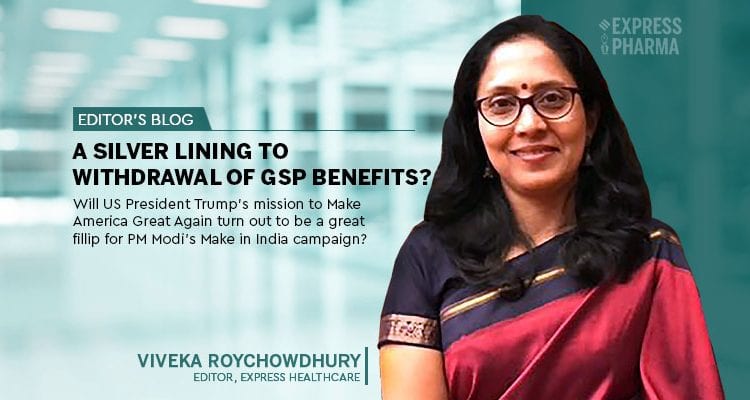 Will US President Trump’s mission to Make America Great Again turn out to be a great fillip for PM Modi’s Make in India campaign?

As expected, the US has withdrawn Generalised System of Preferences (GSP) trade benefits for India from June 5. The decision, which was kept in abeyance till our general elections were completed, has evoked some protests but no one was really surprised, given the high decibel trade war between the US and China and US President Trump’s mission to Make America Great Again. Withdrawal of GSP benefits is simply collateral damage to this larger vision.

According to Ganesh Kumar Gupta, President, Federation of Indian Export Organisations (FIEO) India’s exports to the US during 2018 were $51.4 billion. But out of the $6.35 billion value of exports from India to US under the GSP scheme, net benefit to the tune of only $260 million were accrued by the Indian exporters and thus at the macro level, the impact of GSP withdrawal on india’s exports to US would be minimal. But exporters of products with GSP benefits of 3 per cent or more, might find it difficult to absorb the GSP loss. The pharma and surgicals sector is the third largest in terms of GSP benefits, with average GSP benefit of 5.9 per cent, so exporters will feel the pinch. As FIEO President, Gupta has suggested an extension of the Rebate of State & Central Tax Levies Scheme (RoSCTL) to products where GSP loss has been significant so that the market is not lost.

Irrespective of such rebates, India has to move on. Given that just $6.35 billion worth of US-India trade, out of a total bilateral trade of $51.4 billion, will be impacted by this withdrawal, it will not be too difficult. India must choose to transform today’s loss into future gain. The sliver lining to the withdrawal of GSP benefits is that we will be forced to Make in India what we import from the US. And raise the standards of these products to global levels so that our exports are sought after for both the affordable price as well as high quality. Thus, PM Modi’s flagship campaign, war cry if you like, from his first term is even more relevant today. So will US President Trump’s mission to Make America Great Again turn out to be a great fillip for PM Modi’s Make in India campaign?

Take the case of pharma and medical devices exports to the US from India. India imports nearly 80 per cent of its medical devices so US trade preferences will definitely impact this sector.  According to data from a US Commercial Service of the US Department of Commerce report, the medical device industry accounts for one quarter of US exports to India.

How will the withdrawal of GSP benefits impact patients? Initial reactions seem to suggest that the cost of healthcare will increase.  As Vivek Tiwari, Founder and CEO at Medikabazaar, B2B online marketplace for medical equipment and supplies in India points out, imported technology, especially in imaging and diagnostics which is yet not extensively locally manufactured, will become expensive.

Ironically, the withdrawal of GSP benefits will be painful even for the US. As Tiwari posits, it is counterproductive as pharma exports will become expensive if India kicks in reciprocating tariffs. His suggestion is that both countries should consciously exclude healthcare related aspects out of the sanctions as it is in best interests of both countries.

All countries, the US and India included, are trying to reduce healthcare costs. Even as India Pharma Inc course corrects on good manufacturing practices, it remains a powerhouse of generic medicines, which provide affordable options to patients across the world, including the US.

In the long run, no business can ignore India’s demographics and huge market potential.  Industry players will find solutions to access this market. Tiwari suggests that more healthcare companies may open shop in the country or boost local manufacturing keeping in mind growing healthcare demand especially since Ayushman Bharat promises tremendous growth potential. Finding win-win solutions, especially in the pharma and healthcare sectors, is not so difficult. All it needs is a political will and an eye on the long term. Analysts are advising a shift in optics as well. We could now see a toning down of rhetoric on India’s ambitions of being a super power to fall in line with the US President Trump’s need to play Big Brother to the world.

India’s political leadership, steered by PM Modi has so far kept the country’s developmental requirements in mind by holding firm on important issues like intellectual property rights. Hope this stance continues in his second term as well.